Yesterday, for the first time in 8 years, I was able to get Indian food on a work lunch hour. Horn Lake did not have any Indian restaurants (although it does have a Golden Corral) and there are none Downtown, so I have rarely been able to satisfy my hunger for one of my favorite types of ethnic food. Yesterday, though, I had an easy 2 mile drive from my office at Poplar and Kirby Parkway to the buffet at Mayuri Indian Cuisine on Quince. Look at this gorgeous plate of food! 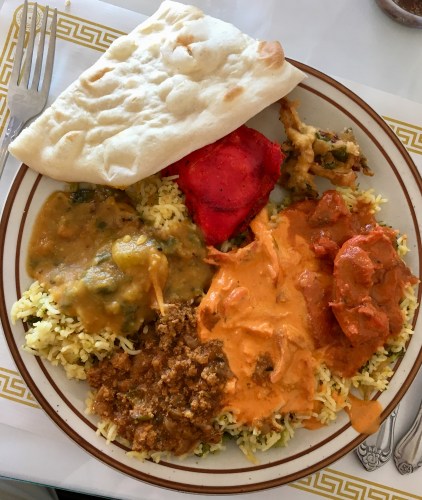 The only downside is that after adding a Coke, tax and tip, I was out $17.09. I love exploring my new lunch spots but I don’t want to be spending that much every day!

Retailers: Open on Main returns May through October of this year. This is your opportunity to have a pop-up retail shop at a highly visible location in the Downtown core. The locations are 100 Peabody Place Suite 175 (I believe that would be the old Life Is Good location) and 147 S. Main (which I believe is the former Shelton Clothiers). If selected, you get a rent-free lease on one of the locations, large storefront windows, a location near a trolley stop, and access to employee bathrooms.

The speaker lineup has been announced for Ignite Memphis Food at Playhouse on the Square on April 12. Speakers will have 5 minutes each to speak on topics they are passionate about, with slides auto-advancing every 15 seconds. Tickets include beer and lots of food samples.

Felicia Suzanne Restaurant is celebrating its 16th anniversary with complimentary dessert bites for all guests who dine there this weekend.

Major, major respect to Shelby County Schools superintendent Dorsey Hopson. This week he announced a minimum $15/hour salary for all SCS employees. Then he announced that no SCS student or employee will be punished for a planned April 20 orderly walkout to protest gun violence.

Loflin Yard will host Easter Hoppy Hours on Saturday, March 31, the day before Easter. From 11:30 to 8 there will be an Adult Easter Egg Hunt. The eggs will be filled with candy and some will have drink cards. From 3 to 6 there will be an Easter Bunny dog costume contest.

Max’s Sports Bar will have another crawfish cook by Glaze tomorrow with the first batch coming out about noon or 12:30. Crawfish are sold by the pound and come with sides of corn, taters, sausage and mushrooms.

The river has receded enough that the Arkansas side of Big River Crossing is being re-opened today. Watch out for damage to trails across the bridge, though.

A third Maciel’s is coming to the Broad Avenue district but this one won’t be exactly like the other two. It will be a coffee shop/bodega kind of place with Wi-Fi and items like breakfast burritos.

Big weekend coming up for the BBQ team! We have our team Meat & Greet tomorrow, a chance for teammates to get to know one another, sample a competition shoulder, drink some Ghost River beer, and get their questions answered prior to BBQ Fest. We will also have news about a new sponsor, news I will be posting in several locations next week.

You know, it’s interesting talking to other BBQ teams about how they run various aspects of the team. I recently talked to members of two teams who hire professional bartenders to work the busy nights, Thursday and Friday of BBQ Fest.

Team A: “We don’t pay our bartenders anything. They’re there because they want to party with us. They get to eat and drink for free. If we have a really good night we might give ’em 100 out of the tip jar at the end of the night.”

Wow. That’s a wide range. However, both of the people I spoke to agree (and I do too) about the concept of the “courtesy 20.” If you’re on a team, and you go and visit another team, even if you only stay long enough to have a plate of food and one beer, you drop a 20 in their tip jar.

Apologies if I am slow to answer emails and texts this weekend from non-BBQ team members.

We have breakfast in the office on Friday mornings, so I’m not hungry enough for a big lunch today. Going to go get a few of those stuffed peppers from the olive bar at Bougie Kroger and that should be enough. Back tomorrow with more news.