The final two Memphis in May events happen this Saturday.

Great American River Run is a half-marathon and 5K taking place on the banks of the Mississippi and through Downtown Memphis. After the run, there is a post-race party with food, drinks and live music.

901 Fest is a celebration of our great city at Tom Lee Park Saturday afternoon and evening, with local live music, local food for sale, and local vendors. There will also be an air show, fireworks, knockerball and Zorb ball, a creative arts tent, and a cornhole tournament.

Most people have Monday off, and if you’re looking for something fun to do late night Sunday, I have a suggestion: FreeWorld is having a grand celebration for their founding father Dr. Herman Green’s 88th birthday at the Blues City Band Box. The evening will be full of surprises and musical guests honoring Dr. Green. Should be a special night.

Classic film To Kill a Mockingbird will be shown at Cemetery Cinema at Elmwood Cemetery this Friday from 8:30 to 11 PM. The La Guadalupana and MemPoPS food trucks will be on site, and libations will be available for purchase. Children 12 and under are not permitted at Cemetery Cinema, nor are pets.

I hate to post bad stuff about Downtown, but this time it’s necessary: Police are showing photos of a person of interest in a sexual assault investigation. The assault happened in an alley near Front and Vance Sunday, May 6 around 5 AM. That would be Music Fest weekend, a prime weekend for predators looking for victims.

Also, shots were fired at a horse carriage Saturday night of BBQ Fest near Front and Pontotoc.

One of my most treasured moments in the booth this year was when the family of a team member who passed away came to visit. I realized I taught his sister math at the U of M in the 1990s. His 18-year-old son, planning to major in computer science, asked if I had any advice. “Do some side projects, projects that interest you,” I told him. “That’ll build up a portfolio for you that you can put on your resume, giving you an advantage over other new graduates when you finish school.”

“What if a project I want to work on is not related to my career?” he asked.

“Then ESPECIALLY do it,” was my reply. I know a guy who has been doing a side project for 14 years, and while not related to his career it has brought him much success, happiness, and connectedness to the community. In case you haven’t figured it out, you’re reading that side project right now.

It still makes me laugh that the troll recruited two of our members. It started with a conversation at Bardog on a day when I had forgot to take my troll out of my pocket and set her on the bar. “Where’s the troll?” I was asked, and that led to a conversation about BBQ. (The troll is Deputy Director of Public Relations for the team.)

I’m also very happy that I recruited my friend Mac to join the cooking team, consisting of our members who had previously competed in regionals as Memphis Squeal and our 2015-17 pitmaster Frank. From what I’ve been told, Mac was a fantastic addition to the cook team, and he said he learned a ton from the others because he’d never done shoulder before. “I’m so happy to be back cooking and I can’t wait for 2019,” he told me Saturday after the festival was over.

Thursday night was the best, dancing with teammates and their guests until midnight. Wait, no, make that second best. Nothing beats finding out we had a trophy that wanted to meet us.

I apologize to anyone who I cut a conversation short with Friday night. I was feeling sick and it was a combination of the heat and too many people being around. I left the park around 9 that night.

Back to my East Memphis lunches

Yesterday I tried another new place (new to me) not far from my office, Amerigo Italian Restaurant in East Memphis. I got the Cannelloni al Forno, an egg pasta stuffed with roasted chicken, spinach, ricotta cheese, fresh herbs and Parmesan; topped with mozzarella, tomato and cream sauces. 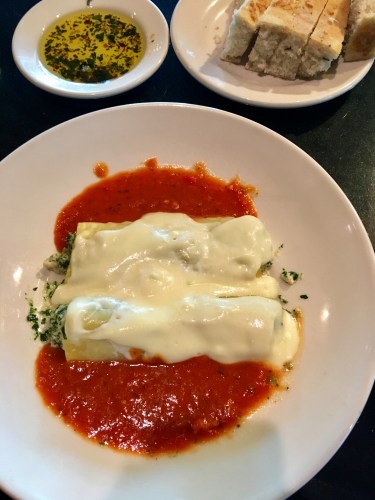 It came with bread and oil for dipping. My entree was out quick and I was in and out in 40 minutes. I will be back to try other menu items. I like it that they have their full dinner menu available at lunch and not just the lunch menu.

Plans for tonight: Given my commute from Germantown, I don’t get out until around 5:45 these days. Sleep Out Louie’s will probably be packed with ServiceMaster folk around that time, so I will lead off at Blind Bear then head over to hear Pam & Terry 7:00-7:30ish after the place has cleared out a bit. Back tomorrow with more news.