Downtown took a major step forward yesterday: The State Building Commission’s executive committee approved the addition of Mud Island and the riverfront to the city’s Downtown Tourism Zone. This will pave the way for an aquarium to be built on Mud Island, and for the Brooks Museum to move Downtown. Of course, there are many more steps ahead, the next of which is a feasibility study, but the first hurdle has been cleared.

I headed over to Sleep Out Louie’s for their grand opening last night. Pam & Terry had already wrapped up their performance, but good news: They’ll be performing at Sleep Out’s every Friday and Saturday in June from 7 to 10 PM. I’ve already been talking to a couple of the original Sleep Out’s regulars/employees about finding a night to meet up.

Explore Bike Share launches today. You’ll be able to rent a bike by the ride, day, month or year and pick up a bike from one of dozen convenient locations. Here is a station map showing where you can pick up and drop off bikes.

The Redbirds host Oklahoma City tonight at 6:35. They’ll have a treat for Thursday’s game: Alex Reyes, one of the top Cardinals prospects, will be pitching a rehab game here.

The tickets for Nine Inch Nails: Cold and Black and Infinite Tour that did not sell last Saturday will be put online for sale Thursday at 10 AM.

The Grizz Den, the Grizzlies store in FedExForum, will extend its hours to 7 PM today through Friday, with most merchandise 50% off.

Belle Tavern has Maker’s Mark Cask Strength half off this week through Sunday.

Oshi is adding a bingo night on Sundays at 6 with host Pattie O’Furniture.

Some of the Start Co. tech startups are looking for summer interns. In the past talented high school students have gained valuable experience working for Start Co.’s affiliated startup companies.

2018 BBQ Fest winners have been posted. I forgot to congratulate another of our local BBQ teams in my posts this week. Porkosaurus tied for first in tomato-based sauce. If you didn’t get to try it at BBQ Fest, you can buy it on Amazon.

Interesting wrestling fact I came across today: WCW held Great American Bash 1986, one of its major events of the year, at the Liberty Bowl. The event had all the big names: Ric Flair, Dusty Rhodes, the Road Warriors, the Midnight Express, the Rock ‘n Roll Express. Yet it drew less than 2000 fans. The reason? No Jerry Lawler and no promotion on Memphis Wrestling TV. Memphis wrestling fans are loyal. Credit to Jim Cornette for tweeting that information.

For yesterday’s lunch I went to Asian Eatery, one of the few Asian places near work I haven’t yet tried. I ordered the Tom Yum soup, also known as Thai gumbo. 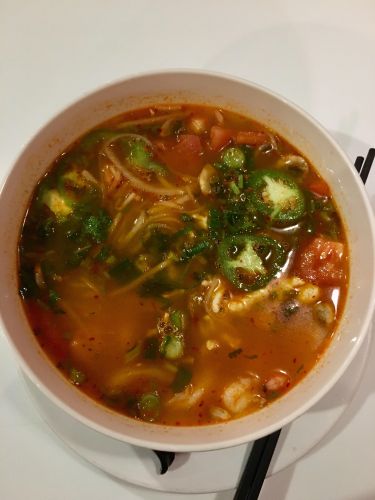 This is a soup with thin rice noodles, chicken, shrimp, bell pepper, onion, scallion, tomato, bean sprouts and mushrooms topped with cilantro and jalapeno. “It’s spicy,” the server warned me when I ordered. I ensured her I was fine. It was hot when it came out – not in terms of spice but temperature. I had to stir it for about 5 minutes to let it cool down. Once I finally started eating, I found that the soup was in no way overpoweringly spicy. If you can tolerate spice at all you will be fine. A delicious and filling meal. Asian Eatery is in the same center as West St. Diner on West Street in Germantown.

Going to hit happy hour at Max’s Sports Bar after work, then over to Blind Bear to hear Charvey at 10. Back tomorrow with more news.