What a morning I had yesterday. My troll kept asking me, “Paul, can I stand on a butcher board to practice for the festival next Sunday?” I had to explain to her that the Butcher Board Festival is not a cooking competition, and even if it was, we are not competing; we will just be there to eat and drink and socialize. I also told her that her standing on various objects at BBQ Fest contributed absolutely nothing toward the Moody Ques’ 7th place shoulder finish. I think that hurt her feelings a bit.

So, by the time Bardog opened at 11 yesterday, I was in quite the mood. Usually I turn down shots, but when offered at Bardog I downed a Jameson. Next stop was the Blind Bear and by 1 PM it seemed like my head was spinning and I needed to get something to eat.

Now, normally when I need food on Saturday afternoon I walk over to Oshi, but that’s not an option anymore. The Bear has great food but I’ve eaten it so many times that it’s too familiar. Same with Majestic down the street. So I decided to take a walk down to Pontotoc Lounge at 314 S. Main. They have the brunch menu on Saturdays as well as Sundays now and I ordered the Chorizo Scramble. 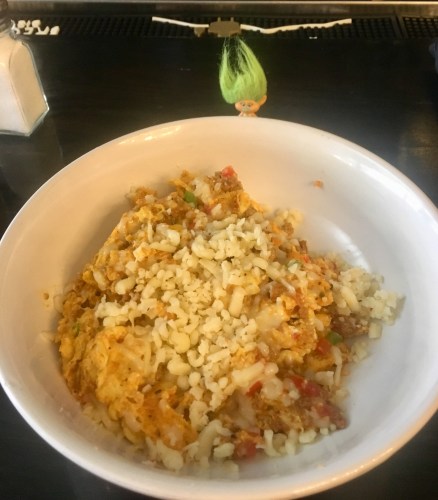 Cheesy, cheesy scrambled eggs with a generous portion of chorizo sausage mixed in. This is the first dish for City Tasting Tours‘ Brunch So Hard tour and now I understand why. I was never into eggs growing up, but then, I never had eggs like this before. Give this dish a try the next time you find yourself on South Main on a weekend.

No news to report today, other than I’m way more excited about the WWE Extreme Rules pay-per-view tonight than I am about the World Cup finals. While everyone else is cheering for France or Croatia, I will be cheering for Bulgaria, hoping that Rusev unseats A.J. Styles as champion. Back tomorrow with more news.