As a fan of spicy foods and drinks, I was intrigued by a cocktail my friend Jennifer ordered at the Silly Goose yesterday. 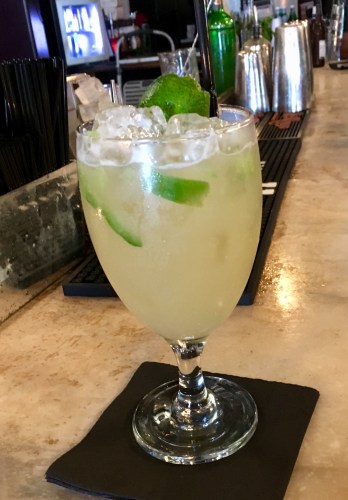 This is the Paloma, made with tequila, grapefruit juice, syrup, and jalapeno. No kidding, the bartender used an entire jalapeno in the making of this drink.

Holly from the I Love Memphis Blog checked out The Pocket, the speakeasy at 115 Union which will become a members-only establishment on September 14. She got great photos of the upstairs, downstairs, cocktails, and food, and her post will help you decide if you want to become a member. Right now it is open to the public, and it opens today at 4.

The annual Beale Street Cigar Festival is coming up one week from today. This year’s festival will feature a performance by Biz Markie.

Tonight is the final regular-season post-game fireworks display at AutoZone Park as the Redbirds host Nashville (first pitch 6:35, gates open 5:00). All fans will receive a voucher for a Field Box ticket to a 2019 Redbirds game, excluding fireworks games and other select games. $2 beers in the Plaza prior to the game.

Spincult, the new gym/physical fitness center/spin cycling center at 700 Madison next to Trolley Stop Market, has its grand opening today 10 to 3. Take a class today on a pay-what-you-want basis, with money raised being donated to LeBonheur.

The Orpheum is hosting a haunted dinner on stage Wednesday, October 24. Learn about the Orpheum’s paranormal activity over a three-course dinner, a tour, wine, haunted trivia, and more.

Memphis Made has its posters ready for the Cooper-York Festival.

Got our posters working for this fall’s Cooper-York Festival. Thanks, Weston! pic.twitter.com/vpQxXiokki

One last reminder – the Kooky Canuck Double Your Dollars gift card sale is coming up this Wednesday at both locations. Twice the poutine, twice the maple flank steak, twice the Yonge Street Burgers (my personal favorite).

I mentioned the other day that there’s a new restaurant, Global Cafe, in Crosstown Concourse serving Nepalese, Sudanese, and Syrian food. They have a website where you can see photos of their food and their menu. Search “global cafe memphis” and it will come up. Why am I not linking to the menu here? Because I can’t. Their URL contains a special character (the e with the accent mark over it) and it won’t copy and paste correctly. Business owners: Avoid special characters in your domain name. Anyway, the menu has a diverse array of food, about 7-8 dishes from each country, and it’s all very reasonably priced.

I saw another very interesting political “what if” on Twitter yesterday. Article I, section 5 of the Constitution requires a majority (51 members) be present for the Senate to conduct business. With American hero Sen. John McCain stopping brain cancer treatment and likely not returning to the Senate, Republicans only have 50 members. Democrats might be able to block the nomination of Brett Kavanaugh by simply not showing up. And this would not be a case where the Republicans could just vote to make a rule change to get around it – it’s in the Constitution.

That’s all for now. Time to go spread a little sunshine. Back tomorrow.