My apologies for the lack of a post yesterday! My air conditioner wasn’t running well. I don’t really like being in my apartment when maintenance people are in there, so I took a shower, reported the problem, and then got out of the apartment for the day as quickly as I could.

The conversion at AutoZone Park has begun, transforming the park from a baseball field into a soccer pitch for Saturday’s exhibition game between Tim Howard’s Colorado Rapids and the USL’s Tulsa Roughnecks FC this Saturday. If they are going to have baseball and soccer games in the same time frame next year, I wonder what the turnaround time will be on the conversion? I imagine it’s not as simple as pulling up the Tigers floor and putting down the Grizzlies floor at FedExForum.

Buy tickets to Saturday’s game here. Start time is 7 PM. Memphis USL supporters the Bluff City Mafia are having a prematch party at the Brass Door at 2 Saturday.

In other Memphis sports news, G-League team the Memphis Hustle has announced their regular season schedule.

King Jerry Lawler’s Bar and Grill on Beale will be closed today and will reopen tomorrow, August 30. I don’t know the reason for the closure but I saw a tweet from Randy Hales saying he is no longer the GM of the restaurant. I hope they find somebody who can replace Randy’s deep knowledge of Memphis wrestling. Too bad I don’t know how to run a restaurant, or I would apply!

Yesterday the City Council voted to approve a variance that will allow a surface parking lot at Main and Beale, where the Tri-State Bank used to be. Belz owns that property and originally planned to put a hotel there, but with the recent spurt of hotel construction in the Downtown core they don’t feel the timing is ideal. The variance is for 10 years and can be extended another 5, giving Belz time to figure out the best use of the property. The Orpheum was a supporter, citing the need for more parking, although the Downtown Memphis Commission opposed, saying a surface lot in that location did not fit the master plan for Downtown.

Skate night is back at Tom Lee Park this Friday at 7:30 PM for River Glow Night. Skate rental is free.

The Memphis Union Mission has some rare opportunities for teams of people to volunteer to provide and prepare meals in the Men’s Emergency Shelter on various dates in 2019.

Rudolph the Red-Nosed Reindeer Live on Stage will come to the Orpheum on December 15. Tickets will go on sale this Friday.

Congratulations to Redbirds manager Stubby Clapp on being named the Pacific Coast League’s Manager of the Year for the second year in a row. It’s great for Memphis, but also possibly dangerous… Major League Baseball teams are paying attention to his success here and one of them may poach him away to manage their team. Then again, the Redbirds have a great record of grooming managers, as former ‘birds manager Mike Shildt had “interim” title removed and was named manager of the Cardinals yesterday.

The Flyer’s Michael Donahue has photos from Monroe Avenue Fest including the meatball eating contest.

The Broom Closet at 546 S. Main has announced that it has tarot readers on site every Friday and Saturday from noon to 6, and readings can be arranged on other days by appointment.

For those of you who have been missing beer on draft at the Blind Bear, it’s back. They got a new kegerator installed and are now pouring beers, including some locally made beers, from 5 taps. They are also making some other upgrades. The poker tables have been re-felted with some snazzy new purple felt. Next week they are getting a new pool table which will also have purple felt.

I had a very happy troll last night when her favorite candy showed up at the Blind Bear. 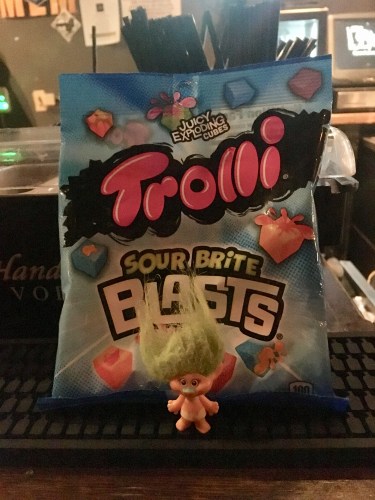 I haven’t played bar poker in about a year, but Monday I decided to play the Silly Goose’s weekly 8:30 Texas hold’em game. I won a hand early on, bumping my initial 5000 stack up to 7200. Later, at blinds of 400/800, I was second to act, with my right-hand opponent folding to me. I looked at my cards.

With the third best starting hand in Texas Hold’em, I was quite happy to play. I bet 2500, slightly more than a third of my stack. By betting that amount I was more or less committing to go all the way with the hand.

Three people called. ARGH! Pocket pairs do not play well in multi-way pots. I was hoping with my strong bet of more than 3 times the big blind, combined with early position, people would believe I had something and I would get only one call. Even zero calls, picking up the 1200 in the pot, would have been acceptable. But this is bar poker and people call with a wide array of hands.

ARGH again! This is just about the worst flop possible for my hand. Two overcards, a flush draw, and if QJ is out it already has a very strong made hand.

I decided my best option was to represent that I liked the flop. Representing strength in early position before the flop, AA, KK and AK would all be within my range of hands, giving me a set or two pair. All the poker players at the table were regulars and skilled enough to know I didn’t have QJ.

I decided to take my chances and went all in for 4700.

My left-hand opponent called – I would not be surprised if I had a tell when I saw the flop, having been out of practice playing for a year. She had AJ for top pair. Turn and river were no help and I was out. Stupid overcards!

Now I’m looking back wondering if I played the hand right. I could have check-folded that bad flop, but it would have left me with less than 6 big blinds, putting me in a pretty desperate position. I think, given my pre-flop bet, I had no choice but to go all the way.

The trouble with the way I played the hand was, I was forcing my opponents to bet 4700 for a chance to win 15,900 (2500 times four plus my post-flop bet plus the blinds). That gives them more than 3-to-1 odds, and if they have anything they should probably call.

I think what I should have done was shoved the entire 7200 pre-flop. Shoving 9 big blinds is not ridiculous, and it would have communicated strength in a way a 3 big blind bet does not in bar poker.

Okay, that’ll do it for this post. Back tomorrow with more news.