USL’s new soccer team in Memphis, debuting in 2019, has a name as of 9:01 this morning: Memphis 901 FC. The Memphis metro has long been referred to as “the 901” by Memphians, and I can’t think of a more appropriate name for the new team. The exhibition match featuring the Colorado Rapids of Major League Soccer (with Tim Howard) vs. the USL’s Tulsa Roughnecks FC is tonight at 7 at AutoZone Park. Pre-match alley party this afternoon nearby at the Brass Door.

I’m really happy for the Door. There have been times when they have struggled to get business, not through any fault of their own but because Monroe has long been perceived as the northern boundary of the scene in the Downtown core. Now Brass Door is going to be Memphis’ soccer pub. I don’t think Seamus and the staff there will have any problem packing the place now that professional soccer is here.

Here’s a photo that illustrates my distaste for the Bird scooters. 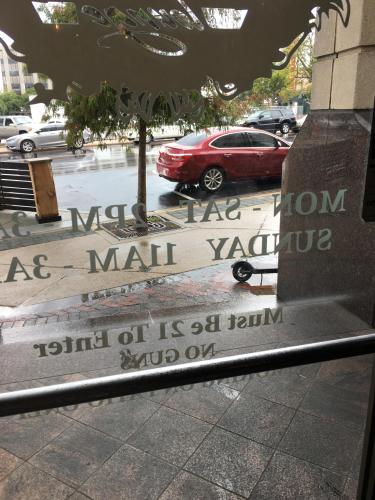 See it? This was taken about 3 PM at the Silly Goose. I can easily see someone going outside to take a phone call, walking down the steps, and tripping over that Bird.

It’s not that I think the Birds are inherently bad, and I wouldn’t be in favor of banning them as Nashville did. They help a lot of people get where they need to go, faster, without using a car, and in a very affordable fashion. It’s just that Memphis has a lot of careless, inconsiderate people, which leads to situations like the one photographed above.

In other Silly Goose news, the new patio is ready: 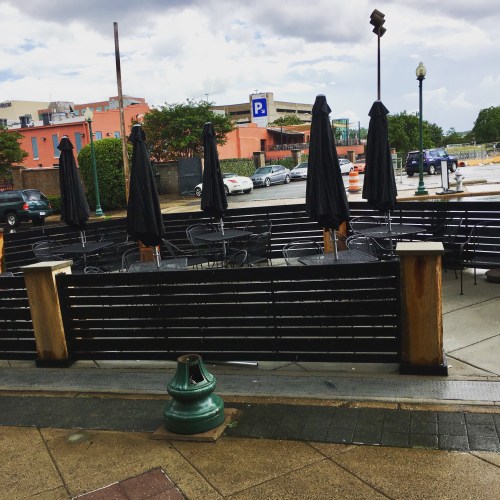 This is a second patio, in addition to the one they have always had. It is across the sidewalk from the original patio. It was installed to make up for the patio area lost when the pedestrian promenade on Peabody Place was removed. The patio space is necessary because the Goose will lose part of its original patio, as the kitchen expands to incorporate a new $65,000 pizza oven.

Over at the Goose’s sibling restaurant Pontotoc Lounge, there are some great lunch deals going on. 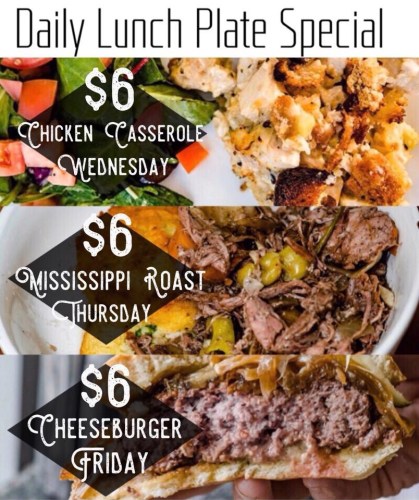 Mississippi pot roast. Get it. I haven’t had the cheeseburger yet but everyone I know who has tried it loves it. Any of those are a screaming value at $6.

Last night I went to South Main Trolley Night, and I mean, I actually walked around and visited the shops of South Main, rather than just sitting in Max’s Sports Bar all evening. I stopped by Stock & Belle because they always have great snacks. After that I wandered down to the 409 South Main food hall where the City Block butcher shop was open for business. I asked if I could take a photo of their case in order to show my readers what they’ve got. (Click for a larger size) 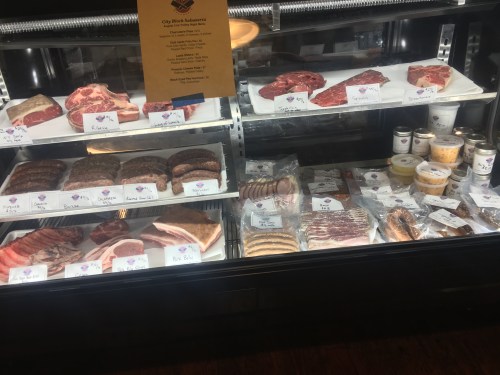 I did make a brief stop at Max’s Sports Bar, where I confirmed he will have the Arkansas-East Illinois game on today at 3. Got a stop at Nate’s bar at Earnestine & Hazel’s in too.

We have an opening date for the Germantown Trader Joe’s grocery: September 14. For those of you who have never been inside a Trader Joe’s, it is worth the drive out there. Great wine, great chocolate, great frozen food selection, great place to get ingredients if you like to cook.

This week, friends and I were discussing where Trader Joe’s might open a second Memphis location, and I have an idea for the perfect spot: There’s a building at Tennessee St. and Huling Ave. that formerly housed a Spaghetti Warehouse. It’s just about the size of the Trader Joe’s locations I have been to, and there is ample surface parking. That area of Downtown is about to go through a boom phase, with a hotel and a Malco movie theater going in nearby on G.E. Patterson. The Tennessee Brewery apartments right down the street are opening at full occupancy. The National Civil Rights Museum draws plenty of visitors to the area. The location is a short drive from Midtown, home to many vegetarians who would embrace Trader Joe’s.

I know Trader Joe’s corporate officials will be in town this month for the Germantown opening, and if any of my readers have connections to those officials, please pass along this offer: I would like to give you a tour of Downtown, and particularly the area within walking distance  of Tennessee and Huling. I would like to tell you why I love the area and can’t imagine living anywhere else. I would also like to explain to you why Trader Joe’s would be a natural fit for the neighborhood. I’d also be happy to address any criticisms you have heard about Downtown from the folks out in Germantown or elsewhere. Just to make it clear, I do not get paid to do this. I am not part of a marketing department that promotes Downtown. I am just a guy who has paid rent down here for 16+ years and who discovered the place where he best fits in. For that reason I think I am the ideal person to show you around. Hit me up at paul@paulryburn.com if you want to schedule a time.

College Football Saturday! Memphis opens with a home game against Mercer at the Liberty Bowl today at 6. Bet the tailgating at Tiger Lane will be off the chain this afternoon. Got a couple of games today where I will be cheering against the SEC. I’ll be rooting for Texas Tech against Ole Miss at 11 this morning. At 2:30 Tennessee hosts good ole West Virginny. Almost – almost – all WVU fans I’ve met have been extremely nice and down to earth, including a couple of my BBQ teammates. As for the Vols, I remember the night of Veterans’ Day 2016, when a very drunk Vols fan kept repeating an extremely vulgar two-word nickname (including a slang term for a part of the female body) he privately had for a female who hangs out with his group of friends. That kind of sums up my impression of UT fans. So I’ll root for the Mountaineers. Of course, it goes without saying that I will root for my Hogs against Eastern Illinois. Please don’t blow this, Arkansas.

I have a few more news items, but they’re not time sensitive, so I am going to defer them until tomorrow. See you then with more news.