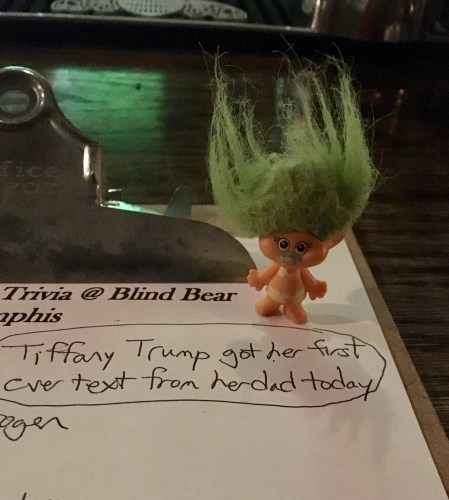 In case you can’t make that out, it says, “Tiffany Trump got her first ever text from her dad today.” I had posted that test emergency services messages would go out at 2:18 and 2:20, but I forgot to take into account that those were Eastern times. So yesterday a little after 1, I was in Kroger buying drink mix and hitting up the $5 Wednesday sushi when the alerts went off. I keep my phone’s ringer off because I get so many telemarketer and spam calls, but that thing was vibrating in my pockets for a good two minutes.

“Presidential Message.” If anyone else were president it would have said something like “Emergency Services Message.” Trump has to make it all about him though.

Phil Trenary will be laid to rest today. The Greater Memphis Chamber president was shot on South Front a week ago today, walking home from a Chamber event at Loflin Yard.

The sold-out Memphis Madness event is tonight at FedExForum. The Memphis Tigers men’s and women’s basketball teams will be introduced in this massive pep rally. We’ll get our first look at Penny Hardaway as Tigers men’s head coach. There will be live entertainment (exactly who shows up is a source of great speculation, with Justin Timberlake and Drake being two of the bigger names that have been put out there). There will be a 3-point contest and a dunk contest among the activities involving the players.

Here are the event maps for #MemphisMadness tonight at the @FedExForum! We can’t wait to see everyone there! 🐯#GoTigersGo #StripeUp pic.twitter.com/c4IYUyFJ7C

An electrical fire has left McEwen’s and Curry N Jerk closed for longer than previously thought. The outside fire entered Curry N Jerk, causing water and smoke damage, closing the restaurant indefinitely. McEwen’s will be closed until electrical repairs are made.

In lieu of our Sandwich of the Month, we are offering two Soups of the Month! Stop by and enjoy our house-made vegan lentil chili or white bean chicken chili today. Available in 8oz, 12oz, and 16oz servings. pic.twitter.com/l0UGAvuiix

There will be a Blessing of the Animals today at 5 at Church Park, Fourth Street at MLK Avenue. Bring your pet and have them blessed by Msgr. Val Handwerker and Deacon Eugene Champion from St. Patrick Catholic Church.

The CA reports that the Brooks Museum has taken a major step in its plan to move Downtown. They’ve issued a request for qualifications for design architects to create “Brooks on the Bluff.”

A new pop-up shop, Wanderlvst, is coming to 100 Peabody Place starting tomorrow. This shop will bring global fashion to Downtown Memphis with a curated selection from Europe, Asia, and Africa.

That’ll do it for now. I’ll be under a time constraint tomorrow because I’m doing lunch at Felicia Suzanne’s again, but hopefully I’ll be able to get a post in before I go over there.