Sad news this morning about one of our Downtown community. The Krewe of DejaVu Facebook page reports that Chef Gary Williams has died. Williams came to Memphis after Hurricane Katrina and opened his restaurant on 936 Florida 10 years ago. In 2013 he opened a location on the Main Street Mall but it closed last year. Williams’ specialties were Cajun and Creole cuisine.

Flight has been named one of the top ten fine dining restaurants in the country by TripAdvisor. Flight is known for its “flights” where you can try three portions of different entrees. There are also dessert flights and wine flights. The restaurant is in the ground floor of the Broadnax Building at Main and Monroe.

Speaking of Flight, it appears that a movie was filmed there yesterday. Uncorked is a movie made for Netflix. Courtney B. Vance stars as the patriarch of a family that owns an iconic BBQ restaurant here in Memphis. The son of the family, however, was not feelin’ the whole BBQ thing, and chose to go in a different direction, becoming a wine sommelier.

I found out about the filming because my troll and I decided to walk over to Bardog to see what the lunch specials were yesterday. It was a good day, with a fried pork chop on the menu. 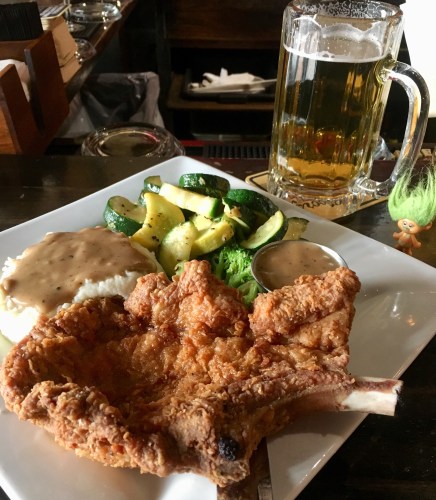 This was a huge, meaty pork chop that was so big I barely finished it. It came with a good-sized portion of mashed potatoes with gravy. My troll, who likes foods that are the some color as her hair, really liked the vegetable medley.

Going to the Memphis Tigers men’s basketball game Saturday? You’ll want to get there early.

For the first 7500 at Saturday’s UAB game Thanks Regional One Health #GoTigersGo pic.twitter.com/OIrH2Mw6oX

The game is against UAB at 12 noon. Saturday is a doubleheader day at FedExForum, with the Grizzlies hosting LeBron and the Lakers at 7.

The City Council is still at a stalemate trying to fill the District 1 seat. They voted over 100 times two weeks ago but failed to reach the needed 7 votes for a candidate. They tried again Tuesday and failed, after which Council meetings were scheduled for every day until the seat was filled. Yesterday four members walked out, making a quorum impossible, and now there may be court action to compel those members to attend meetings. Even after they fill the District 1 seat, there are two more seats to fill. A local activist I’m friends with on Facebook referred to the body as “the City Clowncil,” and more and more I am beginning to think he has a point.

Locally made Delta Sunshine beer is now available in Memphis bars. They had it at Bardog yesterday when I was in there.

The Green Beetle is hiring a restaurant server.

Those of you with kids, fifth grade and up: CodeCrew has some very cool afterschool programs.

Newly announced afterschool programs! We are back this January with 3 classes, the titles may sound the same but the classroom activities are not.

Open to girls and boys, grades 5 and up.

Students can sign up for more than one class.

Wagner Place, the street that runs parallel to Riverside Drive between Union and Beale, is getting a look by the Memphis River Parks Partnership. Currently it is hardly the prettiest street in the city, and as a connector between the future Brooks Museum and Tom Lee Park, improvements are needed. In other news, a cafe will be coming to the new River Garden in Mississippi River Park.

Wiseacre is gearing up for the yearly release of Astronaut Status beer on December 21.

Burger King is trolling McDonald’s with a penny Whopper deal through the 12th.

All right, that’ll do it for this post. Back tomorrow with more news.