Penny Hardaway’s Memphis Tigers are back at FedExForum today, hosting Florida A&M at noon. It’s another doubleheader day at the arena, with the Grizzlies taking on the Boston Celtics at 7.

Ghost River is giving you a reason to delay your New Year’s resolutions for a day on January 1. They will open at noon that day and will be serving their craft beer. If you want to bring wine or champagne, they will open it for a small corkage fee. They will have the college football bowl games on, and Yippie Trippie and the Porkstars will be parked outside with a special New Year’s Day menu.

Your Inner Yogi, the yoga studio at 10 N. Second, will be starting a book club in the new year. They’re asking yogis to drop them a line and let them know what kinds of books they’d be interested in reading and discussing. BOOKS!

Baby formula Pedialyte has long been used by adults as a hangover cure. Pedialyte is finally giving into this trend and is releasing a product targeted as adults who drink. It will be called Pedialyte Sparkling Rush and will be a packet of powders that you pour into water, like Emergen-C or Alka-Seltzer.

People are getting all worked up because it’s believed that blue Muppet Grover, who we all watched when we were little, might have dropped the f-bomb on TV. Seriously, with all the problems we face as a society right now, we’re concerned with whether a Muppet said a variant of the word “fuck”? No wonder this country is such a mess.

I went to Max’s Sports Bar last night to watch the Camping World Bowl. While there, Perjorie T. Roll got to enjoy a Dreamsicle slushie, and also got to meet Christina, Max’s employee who created the slushie recipe. 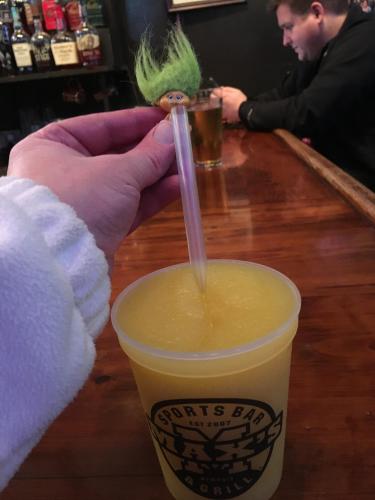 My enjoyment of the game was somewhat dampened by two boorish, drunk old men at the corner table who kept yelling out “WE’RE GOING TO THE CHILI’S IN SOUTHAVEN TO WATCH THE TIGERS GAME TOMORROW. HUH HUH HUH HUH” as though they thought they were funny. Well at least I now know what Beavis and and Butt-head will sound like in 50 years. I hope they remember to ask for their senior discount on their buckets of Miller Lite at Chili’s.

Three of the Big Six bowl games are today. We start off with the Peach Bowl at 11 on ESPN, Florida vs. Michigan. Apologies to my friend Jason but I will be rooting for Florida in this one. My general philosophy is to root for SEC teams not named Tennessee or Ole Miss as long as they are not playing Memphis or an undefeated team from Memphis’ conference.

Next up will be the Cotton Bowl at 3 on ESPN, featuring playoff semifinalists #2 Clemson vs. #3 Notre Dame. I will be rooting for the Irish here. I admire the way Notre Dame has maintained its conference independence in football without giving up any of its status as a national power in the sport.

After that we have the other playoff semi, the Orange Bowl on ESPN at 7 PM. #1 Alabama vs. #4 Oklahoma. Although I like Oklahoma a lot and had it as a backup option for my own college attendance, I have to root for Alabama here. Not only does the SEC rule mentioned above apply, but my friend Bama Lawdog would kill me if I didn’t roll with the Tide.

Time to get out and watch some sports. Maybe I’ll get the corner table by the door at Max’s, so those old coots will have to find a different spot if they deviate from their supposed plan to watch the game at Southaven Chili’s.

The news cycle tends to be really slow around New Year’s, so it’s possible I will take a day or two off here and there. Don’t worry if I do, I’m not sick or anything, just out enjoying the Downtown life. Back with more news when I have it.