Yesterday was a fantabulous, superiffic kind of day for me! I started off at Pontotoc Lounge for D-RANKS with B-RAD.  No women came in, asking Brad about me, asking to be introduced to me as has sometimes happened at Brad’s bar in the past, but it was a good day nonetheless. The jazz band was playing and by 1:00 every table in the house and every seat at the bar was full.

They had the NFL games on. I’m not big into watching the NFL so I spent a bunch of time surfing Twitter on my phone. I picked up a couple of things while doing so that I want to pass on to my readers. First of all, if you haven’t been to Sunrise Memphis, the breakfast place out on Jefferson in Victorian Village yet, here’s a reason to go:

Can’t decide what to order? Can’t go wrong with the King Biscuit! With fried chicken, country ham, fried egg, sausage gravy, this is what breakfast dreams are made of ✨ #sunrisememphis pic.twitter.com/MhAairUUi5

Now that’s the way to do it! If you can’t decide what you want on your biscuit, why not get everything?

About 1:45 I tabbed out at Pontotoc and walked north to Beale Street to watch the Liberty Bowl parade. Since I moved down here in 2002 the King’s Palace Tap Room has been my preferred spot to watch parades. Although I got there an hour early, there was only one seat open, but it was the best seat: the seat right by the front door. I turned the chair around so I could look outside. Some people mistook me for the doorman. Maybe I should’ve charged them a $5 cover.

Of course, you just can’t visit Beale Street without getting a Big Ass Beer: 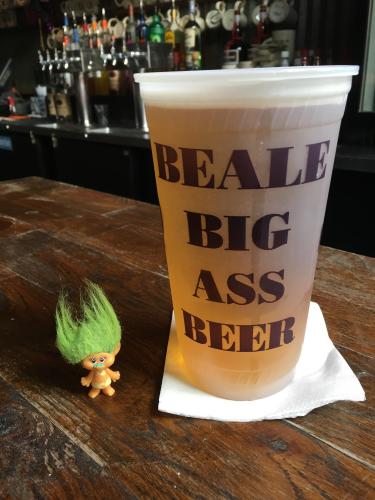 A group of people who usually watch parades at the Tap Room came up and briefly looked inside, then kept walking. That made me laugh. Good riddance!

I got to talking to two Missouri fans who are staying at an AirBnb in Midtown. The lady is into real estate and she had been scoping out the neighborhoods in Memphis that she thinks are the next big thing. It was a pleasure to talk to them. While I was neutral about the Liberty Bowl, that conversation convinced me to root for Mizzou.

Around the time the parade ended, my neighbor Buddha stopped by briefly and mentioned that he was on his way to see our friend Christina who bartends at Flying Saucer Sunday nights. That sounded like a good plan, so I went up there as well. The Memphis Saucer (unlike many Saucers) doesn’t carry PBR, so I ordered the Fire Sale, the daily beer on tap that they discount to $3.50. Back in the day my friend Mikey (who I saw very briefly yesterday) and I used to gripe about the Saucer putting uninteresting beers on Fire Sale. They have gotten better since making some management changes. Yesterday’s Fire Sale was a Belgian Dubbel! I think it was called Black Amber The Special, but don’t hold me to that – I could barely read the menu after a few sips of that thing, it was so strong!

Christina, who is a big fan of my troll, asked “Where’s Perjorie?” and I got her out and stood her next to my beer. 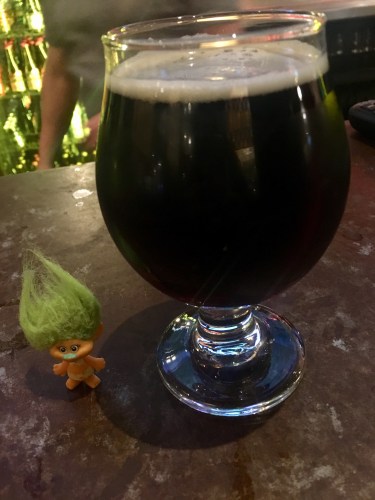 Whoo! After two of those Dubbels my head was spinning. Christina said “You need to start come seeing me on Sunday nights” and if they continue Fire Sales like this one, she can count on it! I was in bed by 9 PM, thanks to those beers.