Given the holiday week, yesterday didn’t feel like a Thursday, but it was, which meant it was once again time for the lunchtime food truck rodeo in Court Square. I walked up there with my meal already in mind. By this point I have ordered from most of the food trucks that come there. However, I have avoided getting BBQ. “Why would I buy BBQ from a truck when Central BBQ is within walking distance?” I wondered.

“Well, you might want to make one exception,” a friend advised. “Smurfey’s Smokehouse is really good. They have BBQ nachos and potatoes.” I love a good potato with BBQ. I walked up to the window and ordered a pulled pork smoked potato with veggies. After a few minutes they handed me a box that felt like it must have weighed 3 pounds, and I walked it home. 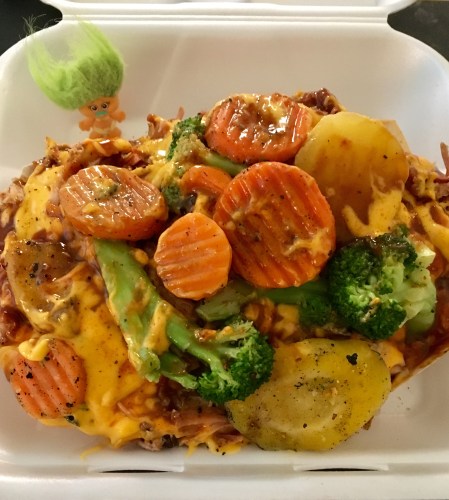 This meal was outstanding. I had a huge smoked potato, topped with some of the best pulled pork I have had in my life. It was topped with melted cheese, Smurfey sauce, and an assortment of vegetables. Even the heartiest of appetites should be able to get two meals off this. The potatoes can be ordered with or without the veggies, and they also have chicken and steak if you prefer one of those meats to pulled pork. They have sandwiches and BBQ nachos too.

Smurfey’s is not the most noticeable food truck in Court Square on Thursdays. No flashy colors or big signs, just a black truck pulling a black trailer with “Smurfey’s Smokehouse” painted on the side. Don’t make the mistake of overlooking Smurfey’s for as long as I did. It is the real deal.

The Memphis Redbirds are hosting three job fairs to hire for event staff for Redbirds and Memphis 901 FC games. The job fairs will be on the Club Level at AutoZone Park  at the following times:

Downtown Nutrition has opened at 95 S. Main. They have high protein, low sugar energy drinks, shakes, and coffee. They envision themselves as a place that will build a healthy community Downtown.

Penny Hardaway’s Memphis Tigers enjoyed a fine start to conference play with a win over Wichita State last night. Penny made some lineup adjustments that no doubt contributed to the victory. I hope this will shut up the Negative Nellies who say Penny can’t coach. The Tigers face a stiff challenge on Sunday, taking on undefeated #19 Houston at Houston. The game will be at 6 PM and will be on ESPNews.

There will be a wine tasting dinner at Paulette’s over on Mud Island the evening of Tuesday, January 8. Wines from Italy, Argentina, New Mexico and California, all which have scored 90-93 from The Wine Enthusiast and Beverage Tasting Institute, will be featured.

Congratulations to my Congressman, Steve Cohen, who became chair of the Constitution, Civil Rights and Liberties committee under the House Judiciary Committee yesterday. I cannot think of a more capable person to take on that role. Go get ’em Steve!

That’s it for now. Going to spend a few hours reading a Kindle book I bought and then get out. Back tomorrow with more news.