Got some good news for my Midtown readers this morning. For those of you who enjoy the great food at Westy’s, you no longer have to make the drive Downtown to get it. Westy’s Express is now open at 1667 Madison, offering the same menu as the Downtown location, and they deliver. They have a huge menu and everyone should be able to find something they like. Never been to Westy’s? I recommend any of the wild rice dishes, the open-faced chili cheeseburger, and the world-famous hot fudge pie.

The Commercial Appeal did a profile of Brandi Marter, owner and chef at Bedrock Eats & Sweets. Bedrock offers a menu that is made up of foods that have not been processed or modified, and it’s all gluten-free. You can dine in, get something to take home from their grab & go, or order delivery. Bedrock is at the corner of South Main and Vance next to the Green Beetle.

Chef Kelly English tweeted a request yesterday to local Memphis diners that I feel is worth repeating. Please eat one meal out at a local non-chain restaurant this week. This is the slowest week of the year for restaurants, and your patronage will help ensure that all the cooks and staff get a full week’s pay.

Elmwood Cemetery will host The Emerald Isle on St. Patrick’s Day on March 17. This will be a special tour to learn about the Irish and the Scots who are buried at Elmwood. Tickets are $20.

Ghost River is bringing back Drink-N-Draw, its popular event that is part art class and part game show, to its taproom on Friday, January 11. Prepare to laugh a lot and compete to win some prizes.

Cozy Corner, the BBQ joint on North Parkway, has new hours as of today: Tuesday-Saturday 11 AM-8 PM.

My friends at RAWK’n Grub are having a tasting party tomorrow, Friday, January 4, from noon to 3. Come try some of their best items. RAWK’n Grub used to be a food truck, but it is now based out of the Citgo at 630 N. Highland. Best gas station food in town!

The Memphis Tigers host Wichita State tonight at 8:30 at FedExForum. The game will be televised on CBS Sports Network.

I played trivia at the Blind Bear last night, and after the first round of questions I came up with my team name: 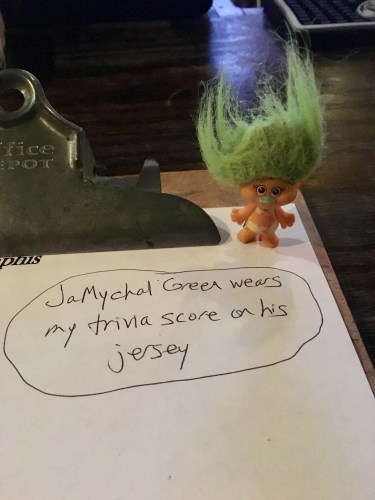 JaMychal wears the number 0 for the Grizzlies. The first round was all characters from movies or fiction based in 2019, and I am terrible at that. The second and third rounds were not such a bust for me, though, and I ended up finishing third.

Oh MAN did it ever suck to watch the Grizzlies blow that game against the Detroit Pistons last night. Something’s got to change, and it’s not firing Bickerstaff. Not that he should get a pass, but Memphis is becoming known as the place where there’s a coaching change every year to year and a half. No head coach worth his salt would want to come here knowing that.

Here’s the way I see it: The Grizz experienced their first taste of success during the era of Z-bo and TA. It continues, to an extent (remember, we were first in the Western Conference at one point earlier this season), in the present era of Mike and Marc. However, the Grizzlies will be Dillon and Jaren’s team in a few years, and the future just looks so bright that it seems worth it to start acquiring assets to build around those pieces. My suggestion is to do something I previously would’ve thought unthinkable: Shop Marc around on the trade market. If we can get a first-rounder or a young up-and-coming big man to put alongside JJJ, I think it’s at least worth considering.

Donald Trump said yesterday that he thought he would have made a good general. No kidding, he really said that. Trump may be the most incompetent and corrupt president in U.S. history, but at least he has some unintentional comedic value from time to time.

All right, I’m going to hit Publish and then walk up to Court Square to see what food trucks are there. Back tomorrow.