Yesterday I went over to the Court Square food truck rodeo with no particular lunch in mind. After looking over the selection, I decided to visit the Soi Number 9 food truck. I went up to the window and ordered the Khao Soi Noodles – egg noodles with stewed chicken in a yellow curry sauce with onion, pickled greens, onions and a lime. The lady at the counter asked my name so she could call it out when the order was ready. When I told her it was Paul, she said, “You write a blog?” Yep, this was not my first visit to Soi Number 9 and I have blogged about good past experiences with them.

My food was ready in about 10 minutes and she asked if I wanted a cup of Thai hot chili sauce to take with me. I love spicy, so of course I’m not turning that down! 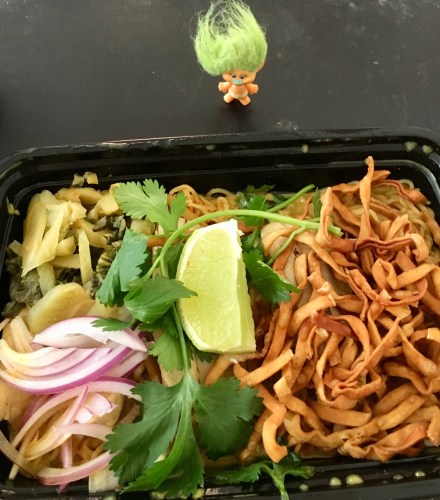 What a beautiful presentation! As it turned out, I did not need the hot sauce. I don’t eat a lot of yellow curry and was pleasantly surprised to find it was hotter than I expected. All the flavors worked so well together and it was a delicious lunch. As is often the case with food truck Thursdays, I couldn’t finish all my food so I had leftovers.

The CA reports that the historic Ambassador Hotel on South Main will be renovated into apartments, about half of them being rented out using AirBnb, with a restaurant on the ground floor. The developer says there is a high demand for short-term rentals in the area, which is true, especially during Music Fest and BBQ Fest. A “well-known hospitality company” is said to be interested in opening the restaurant and further developing the South Main food scene.

The Man of the Woods is back at FedExForum tomorrow night at 7:30. Justin Timberlake already made one tour stop here in 2018, but demand was so high that he added a second date. There’s always some excellent people-watching Downtown on the nights of JT concerts. Many women tend to dress to the nines for his shows.

Great post by Holly of the I Love Memphis Blog on the soon-to-open Greyhound, a new craft cocktail bar in the Downtown core. What’s up with the name, you ask? The bar is inside the new Hilton Garden Inn across from AutoZone Park on Union, on the site where the old Greyhound bus station used to be located. Holly reports that gin drinks will be a specialty.

Vance Lauderdale of Memphis magazine has a look at Madison and Main in the early 1900s.

Classic 1952 movie Singin’ in the Rain plays on the Orpheum’s big screen tonight at 7.

The Andrew Michael family of restaurants is having a Guest Chef Series in 2019. This will include two of their Downtown restaurants. On Sunday, January 27, Kevin Nashan of Sidney Street in St. Louis will be in the Gray Canary’s kitchen. On March 4, Catherine & Mary’s will host Rebecca Wilcomb of New Orleans restaurant Gianna.

The MBJ has a sneak peek at what is going on with redevelopment of the former Wonder Bread bakery space over in The Edge. The project’s 290 apartments should be ready to be occupied by May of next year.

Downtown Yoga is having a Galentine’s Day Celebration on Wednesday, February 13 at 6:45 PM. This is a 45-minute restorative yoga class that will be a celebration of female friendships. After the class there will be sweets, beverages, and flowers. Everyone, both women and men, are welcome. YOGA!

Well here’s something new and different: There will be a Water Lantern Festival at Dr. Martin Luther King, Jr. Riverside Park, just south of Downtown, on Saturday, May 11.

If you live or work Downtown and have thought about purchasing season tickets for the Memphis Express, the city’s new pro football team, next week would be a good time to do it. Call 901-881-3344 between 9 AM and 5 PM January 14-18 from a Downtown location to order season tickets, and a special gift will be delivered to you within 30 minutes or the tickets are free. Certain restrictions apply.

Bluff City Life has a segment introducing viewers to the owners of the new Downtown Nutrition shop on the Main Street Mall.

That’s it for now. I read a life-changing book this week, a book that made a lot of things make sense that previously made no sense. I may talk about it on here at some future point, but for now I want to get out and tell my friends about it. Back tomorrow with more news.