Two Girls and a Whip will host a Cupcake Dinner in the Underdog Room of Bardog Tavern Sunday, April 14 at 6:30 PM. You already knew you could have breakfast for dinner, but did you know you could have it in the form of cupcakes? Here are the courses:

Each course will be expertly paired with wine or a cocktail by Bardog’s very own Melissa. Cost is $40 and seating is very limited so an RSVP is required. Call 901-472-2253 to make your reservation.

For my friend Katie Mac:

If you need a reason to smile then remember that someone built a water slide for ducklings & they are totally here for it😃 pic.twitter.com/k6GKiT3IGU

The Withers Collection Museum & Gallery on Beale Street, featuring the work of photographer Ernest Withers, will host commemorative history tours on Thursday, April 4, the anniversary of Dr. Martin Luther King Jr.’s death. The tours will begin on the hour 10 to 3, and will include a short lecture, a guided tour of the Civil Rights Exhibition, and a collectible takeaway. $7 adults/$5 students.

Edge Motor Fest, celebrating the new automotive history museum opening at 645 Marshall, now has a website and it’s a very good one. As your #1 source of news and information about The Edge, I plan on being there!

While we’re on the topic of The Edge, Evelyn & Olive on Madison is having a jerk chicken festival there today from 4 to 8. While there, enjoy their signature cocktail “The Crazy Jamaican.” Or in some cases, “The Batshit Crazy Jamaican.”

Huling Avenue will be blocked between Tennessee and Wagner while the railroad works on repairing an overpass. The closure will start this morning at 9 and is expected to last until Monday, April 1.

Yesterday I tried the Grub food truck at the Thursday Court Square food truck rodeo. I got the Korean beef quesadilla. 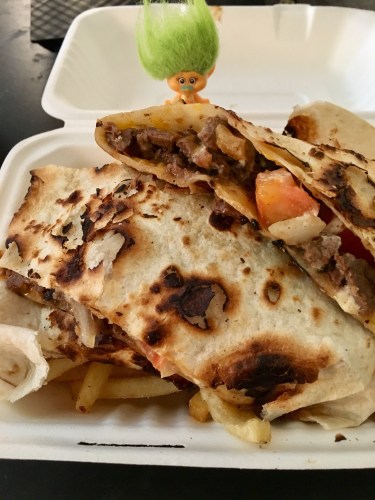 Absolutely delicious! One of the very best Thursday food truck meals I have had. The Korean beef is also available in the form of a sandwich or burrito. All entrees come with fries. The truck has a variety of hot sauces, and there are to-go cups with lids to make it easy for you to take hot sauce back home or back to the office.

The Grizzlies’ G-League affiliate the Memphis Hustle has advanced to the second round of the G-League playoffs. They play the Rio Grande Valley Vipers tonight at 7 and the game will be broadcast on Facebook Live. I saw that in the last game, 6’9″ Yuta Watanabe got some time at point guard. The Japanese Magic Johnson?

If you love beer and people, as well as music, food, trivia, and good vibes, there may be a job for you. Ghost River is looking to hire a bartender for its taproom, 15-25 hours a week, mostly nights but some days. Come by and fill out an application, or email info@ghostriverbrewing.com.

Tomorrow is Ladies’ Day Out at Bass Pro at the Pyramid:

Ladies!! – This Saturday -3 /30 We have a day planned for you at Bass Pro Pyramid – From Archery to Fishing come shop the store, attend seminars and enter giveaways from 10 am – 2 pm. Archery and Bow, Knife Sharpening, Handgun Basics, & Casting Perfection. #Memphis #basspro pic.twitter.com/byAVpMBVQ1

YOGA! The Kroc Center will have aerial yoga on Saturday, April 13.

Hard Rock Cafe will kick off a weekly Open Mic Night hosted by Amber Rae Dunn next Thursday at 8. They’ll have a house guitar and expert sound. Performers get free parking and discount food.

With the baseball season under way, I’ve got a couple of baseball-related articles for you. JSTOR Daily has a look at how baseball became a profession. The first team to put all its players on salary was the Cincinnati Red Stockings in 1869. In the early decades, baseball was not looked upon as a worthy profession, but rather the work of ruffians and hooligans. It took decades of work to evolve the sport’s reputation into one of a gentleman’s game.

Deadspin opines that the best way to see America is to visit every last minor league ballpark. There are 159 of them total. Take on this task and you’ll venture not just to tourist towns like Memphis, but to smaller towns like Johnson City.

Memphis 901 FC has an Off the Pitch video series so you can get to know the team, the players, and the fans better during the soccer club’s inaugural season.

Don’t forget that you have a chance to try the Cousins Maine Lobster food truck without leaving Downtown today. The truck will be parked at Stock & Belle, 387 S. Main, for Trolley Night this evening.

If you want to get a sense of how a visitor perceives Memphis, check out Ned Plays Bridge, a Londoner who came to Memphis for the bridge tournament last week and this week. He’s staying in the Chisca while he is here.

I’ve been recommending The Gaslighting Effect to protect yourself from the worst manipulators. Follow the author on Twitter for lots of good quotes like this one.

A narcissist wants to know your deepest darkest secrets so they can Gaslight you with them. They will take those secrets & mix with lies to paint an unflattering picture.. this turns people against you; while your emotional reactions to the abuse are used to make you look crazy.

One of my Final Four went down last night, as Michigan lost to Texas Tech. There was some good news though… Tennessee lost! Purdue beat the Vols in overtime. UT’s ranking prior to the tournament would have suggested at least an Elite Eight finish. As usual, though, they underperformed. Typical Tennessee. I think the Vols are so bad for so long that when they finally hit a decent stretch (like their football team beating 5 cupcakes and getting lucky in a 6th game) that people give them too much credit. But then once reality sets in (like getting shellacked by South Carolina), expectations come back down to earth.

That’s it for now. I’m going to spend the next several hours on my new interest: Data Science. It’s field that blends software engineering, math and statistics, and human behavior, all interests of mine. Much of it is a practical application of graph theory, which was one of my favorite math classes in college. It also gives me a reason to pick up the Python programming language, which has never crossed my path previously. The nice thing about installing Linux Mint on the laptop I inherited from my mom is that Python is part of the default installation. So I’m going to have some fun nerding out, and tonight I plan to head south to Trolley Night. Back tomorrow with more news.