If you were planning to go see the Redbirds play this weekend, listen up: I have news on schedule changes. Due to the threat of inclement weather from Tropical Storm Barry, Sunday’s game has been canceled. To make it up, tonight’s game will be turned into a doubleheader, two seven-inning games. Gates will open at 3:30, with the first pitch of the first game at 4:05. It didn’t say in the press release, but I am assuming the fireworks show will go on as planned after the conclusion of the second game. If you already had a ticket for today, your ticket is now good to see both games.

If you had a ticket for Sunday’s game, it can be exchanged at the AutoZone Park ticket office for a ticket to any other game this season, including today’s doubleheader. Sunday’s game was supposed to have a promotion where the first 2000 fans would receive a Redbirds waffle bat from Prarie Farms Dairy. That promotion has been rescheduled for Sunday, August 4.

The Weather Channel projects the center of Barry will go to the west of Memphis, coming close to Shreveport and then Little Rock. However, the fact that the center of the storm will miss Memphis is not good news. The heaviest precipitation from a tropical cyclone tends to fall to the east of the center. TWC has Memphis on the very northern edge of the area where 5 to 8 inches of rainfall is expected through Tuesday.

Looking at the path of the storm, I would guess both Monday rush hours and the Tuesday morning rush hour could be particularly challenging. Downtowners who take the interstate south to work, those two mornings I recommend you take I-240 South and stay off I-55. There’s a place on 55 around the McLemore Avenue exit where 18-24 inches of rainwater has been known to pool during and shortly after heavy downpours.

I always struggle to report things that make my neighborhood look bad, but this time I’m going to. At 2:23 AM today I was lying in bed, trying to get back to sleep when I heard a single gunshot (the first one I have heard Downtown in a long, long time by the way). From the sound I would estimate this happened at approximately Main and Union. About 2 minutes later I heard a police car siren, not constantly blaring but rather the officer just tapping the siren button a couple of times, as if to get someone’s attention. About 3 minutes after that I heard the honking and siren of a single fire engine or ambulance. I wonder what that was. If there were multiple shots, I’d tend to guess it’s thugs who have issues with each other, or maybe fireworks I’m mistaking for gun shots. However, with only one shot being fired, my gut feeling is “robbery.” If anyone knows what went on, shoot me an email at paul@paulryburn.com.

The Daily Memphian has an article and photo gallery about what’s going on at Anime Blues Con at the Cook Convention Center this weekend.

The Bluff City Mafia will host a watch party for Memphis 901 FC’s away game this evening against Charleston Battery. The party will be at the Brass Door and will begin at 6:30. This is Memphis’ only away date during the month of July. If you can’t make it to the Door but want to watch, all matches are broadcast locally on CW30.

Yesterday about 10 AM I was typing my Friday Update post, when the weekly email from Memphis Farmers Market arrived. I use that email to provide my readers a summary of what will be happening at the Market that Saturday. I saw that the theme of the week was berries, and it mentioned they are mini-superfoods and I thought that would be a fun fact to share with my readers. I finished the post and hit Publish. Important fact when you read what’s coming next: Although I sometimes share my posts to Facebook and Twitter, yesterday I did not. I did not share the post on any social medium.

About two hours later I was playing around on my phone. I opened Facebook and started scrolling through my News Feed… and there were sponsored posts about superfoods. H-how??? If I’d shared the post on there I could understand how they mined the data… but when all I did was read an email and make a post to my blog, and then opened Facebook on a different device that then one from which I made the post? I don’t know if Big Brother is watching, but Mark Zuckerberg certainly is. Facebook is scary, man. I totally understand the “quit Facebook” movement but it’s too valuable of a source of information for this blog.

Now that I think about it, I did pull up my blog on my phone before I started surfing Facebook. Maybe that’s it. Still scary that it plucked “superfoods” out of a post that had over 1000 words.

The inflatable water slide at Loflin Yard turned out to be much larger than anyone thought it would. 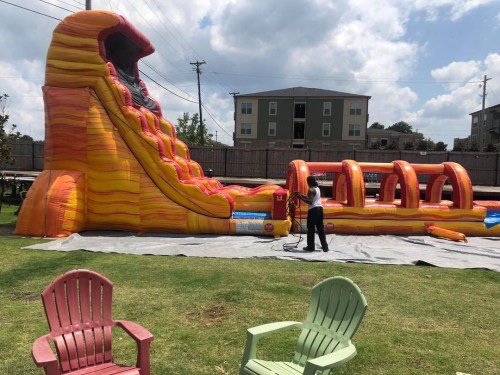 You know who else likes water slides? Crocodiles.

The World Champion Squirrel Cook-Off returns to Bentonville, Arkansas on Saturday, September 21. They say they had a team enter squirrel ice cream one year. Yeah I think I’ll skip this one.

It became official Thursday: Former Tiger Jeremiah Martin has signed with the Miami Heat. He will probably be assigned to their G-League affiliate, the Sioux Falls Skyhawks. His base salary will be $50,000 but he could make considerably more than that if he gets called up to play in even a couple of Heat games. With the rookie minimum salary projected at $898,000, each game played, given the NBA’s 82-game schedule, would pay off more than $10,000.

Downtown cigar shop and bar Robusto by Havana Mix will host a Foundation Cigars Smoker Event next Saturday, July 20, and Sunday, July 21. Foundation rep John Graves will be on hand to answer any questions smokers have.

Amazon Prime Day is coming up next week, and Gizmodo advises, don’t open emails that appear to be from Amazon about Prime Day. There is an Amazon Phishing Kit being used by hackers, one that sends out emails with an attachment directing you to what looks like Amazon’s login page. It isn’t! If you enter your information into the fake login, scammers will have various pieces of information about you including your Amazon password, your date of birth, your Social Security number, and your credit card information. If you want to know what’s going on for Prime day, just type www.amazon.com in your browser’s address bar and don’t allow an email to direct you there.

That’s all for this post. Back tomorrow with more news.