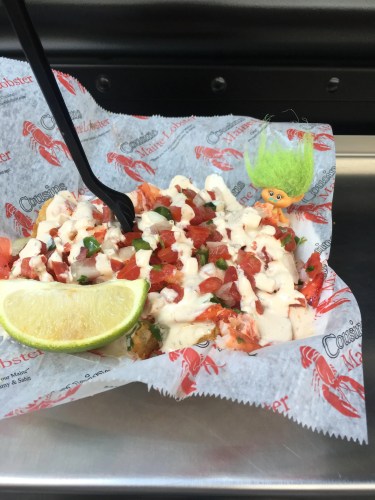 There was NO LINE!

I couldn’t believe it. Previous times I have seen this truck around Downtown, there has been a line of 15, 17, 18 people or more. Sunday, though, I hit it at exactly the right time. I knew I had to order something. I decided a sandwich would be too hard to walk around with, so I got the Lobster Tots, totchos with big pieces of lobster. Let me tell you, this food truck absolutely lives up to all the hype it receives. It’s a bit pricey for food truck fare, but worth the money. If you get a chance to hit up this truck, by all means do it.

I had another yummy treat later in the day: Blackeyed pea fritters from Felicia Suzanne’s. Unfortunately I didn’t get a pic, but they were so much yummy, cheesy goodness. If you eat at Felicia’s and find these on the menu, do not pass them up! Don’t forget, Felicia’s has 25 cent martinis when you order lunch on Fridays.

My compliments to Aldo, Eric, Melissa and all the organizers for what seemed to be the best alley party Bardog has thrown in its 11 years. Everything ran smooth as silk. It’s just too bad it was so blasted hot. I’m sure that kept some people away.

Loflin Yard is doing White Claw Wednesday tomorrow starting at 7. $3 Claws. Ugh… this is the worst fad to hit the bars Downtown since people were hunting Pokemon on their phones. What sucks for me personally is that most of my trivia team will probably abandon me tomorrow night so they can go to Loflin and post videos of them shotgunning the Claw to Facebook.

That’s it for this post. Back soon with more news.