If you smoke cigars, there are events today and tomorrow that you will really enjoy!

The Beale St. Cigar Festival happens today in Handy Park (corner of Beale St. and B.B. King Blvd.), with the festival itself from noon to 6 and a 10-year anniversary party from 6 to 10 in the evening. General admission tickets are $10 and get you into both of those events. There are also upgrades:

I’m not a cigar smoker, but if I were, one of the VIP upgrades would sure sound like the way to go! There will be a cash bar, vendors, and food trucks. Park in the 250 Peabody Place parking garage across from Robusto by Havana Mix.

Then tomorrow, Sunday, September 1 from noon to 6, there is going to be a HUGE party at the Blind Bear. There will be someone there to hand-roll cigars, and DJ Big Sue and Karen Mus’sang Brown will perform. 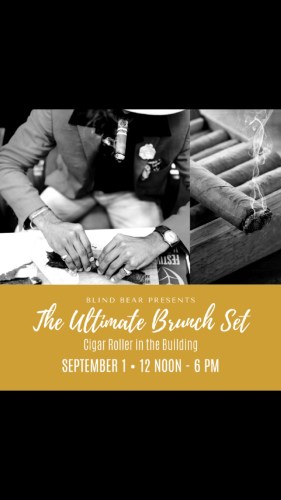 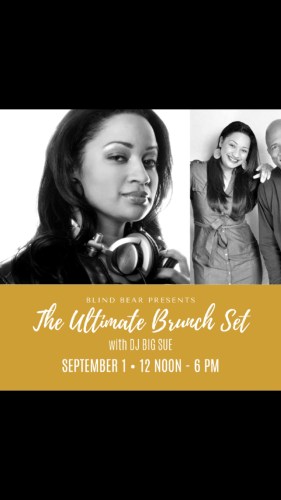 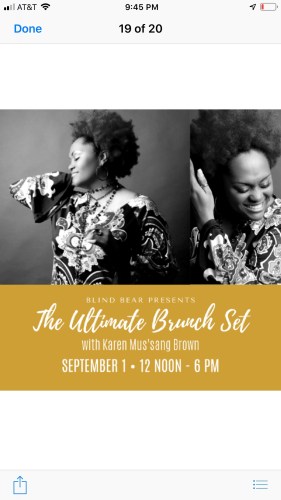 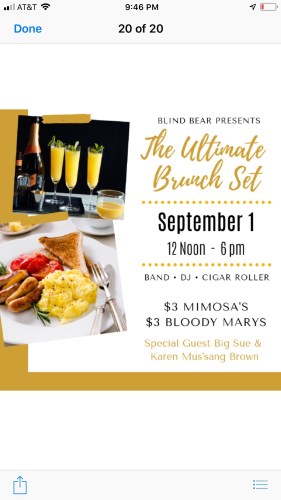 (Click the images to view them in a larger size; sorry for so much whitespace but that was how they were sent to me)

This event is expected to draw between 300 and 500 people. The Blind Bear is more or less bringing in every server and bartender they have to guarantee good service for the event’s patrons. If you enjoy listening to Big Sue on K97, this is your chance to see her do her thing live. I have personally spoken to the organizers and believe this will be an afternoon of the highest quality.

It’s College Football Saturday! Memphis hosts Ole Miss at the Liberty Bowl at 11 this morning. If you’re not going to the game, it will be broadcast nationally on ABC. Other than that, the best game of the day looks to be Oregon at Auburn, at 6:30 also on ABC. As is typical for the first week, most other schools have cream puffs scheduled to work the kinks out in a real game and to get a W toward that 6 needed to qualify for a bowl invitation.

Great quote I saw on Facebook the other day: “GBO” stands for “Got Blown Out” (“GBO” is what Tennessee fans say; kind of the equivalent of “GTG” in Memphis)

3:30 on a Wednesday will be released on a Saturday, specifically this Saturday. That is the name of the latest beer Memphis Made Brewing Co. is releasing. You can try it in the taproom today. This is a specialty beer for Music Export Memphis, an organization that promotes the music and bands of Memphis in other cities. The name of the beer is a reference to the time and day on which the emergency sirens are tested each week. The beer is a honey wheat, and in additional to the original, they will have raspberry and peach. The release happens today at 3:30.

A new restaurant is coming to the Downtown core. Stix is coming to the ServiceMaster building on Second Street, in the space occupied by Dan McGuinness Pub back when the building was a shopping mall. Stix is a small chain that started in Alabama, and this will be the 6th location. They tested out the Downtown market with a food truck in Court Square on Thursdays, and it did well so they are eager to get into a permanent location. They have pan-Asian food, hibachi, and sushi, and will focus on quick counter service for those looking to grab lunch and then get back to work.

In my Thursday post I mentioned my friend Mary who is a yoga teacher. I saw her yesterday and she told me she will be teaching kitten yoga at the Memphis Humane Society on Saturday, September 21. I guess this is kind of like goat yoga, except that kittens walk around while you do yoga instead of goats. I will try to get more info on this if any of you are interested. A previous version of kitten yoga happened 10-11 AM and cost $25. Mary says the class will happen in “that big open room.” They don’t have the September 21 event listed on their website yet so I can’t link to it.

Two Downtown Memphis restaurants that are normally open on Saturday, Sabor Caribe out in The Edge and River Time Market & Deli on Court Square, will close today so that their staff can enjoy a three-day Labor Day weekend. Both will re-open on Tuesday. River Time, by the way, continues to get a lot of love on the Memphis Sandwich Clique group on Facebook. It’s not on a major thoroughfare so I have a feeling a lot of people don’t know about it or don’t think to go there for breakfast or lunch. Don’t miss out!

Tomorrow is a special 901 Day themed Cerrito Bingo at Loflin Yard, 4 to 6 PM.  Wear any Memphis-themed shirt or outfit and get an extra bingo card. There’s a special prize if you bingo on a number ending in 9, 0, or 1.

Got a couple of pieces of Silly Goose news. Their new wood-fired pizza oven is now operational and they have rolled out a pizza menu. I didn’t take a photo of the menu because it said “Practice Menu” at the top and I am told it will change, but there are 5 pizzas on there ranging in price from $12 to $16. I didn’t order one, but the one I saw come out of the oven looked like it would feed 2 people or 1 really hungry person.

The Goose will host Shop Silly, a girls’ night out, Thursday from 5 to 9. Kelly.Boutique and Dream Lilly Boutique will be there with the latest fall fashions. There will be a DJ spinning a special ladies’ night playlists, and special cocktails for this event will be available for purchase. There will be a raffle where you can win percentages off your clothing purchases.

Congratulations to my friends Brittini and Donny, who got to lay eyes on their new baby boy for the first time yesterday afternoon.

All right. I want to give an update on my thoughts about the upcoming mayoral race. For the past several months I have been undecided between County Commissioner and local activist Tami Sawyer, and currrent Mayor Jim Strickland. My heart has been with Sawyer. I agree with her that Memphis can’t be a truly great city until there is opportunity for all Memphians, not just the ones who live in the right neighborhoods. Women and people of color should have a bigger piece of the city’s economic pie, and I believe Sawyer has the best ideas on how to bring that to fruition.

However, I believe that Mayor Strickland has done a good job in his first term in office, especially compared to predecessors Wharton and Herenton, and especially considering the mess he inherited when he took office. Two accomplishments of his administration I greatly appreciate are the massive reduction of 911 call response times, down to 10-15% of the time before he took office; and the improvements at the Memphis Animal Shelter, where a professional rather than a mayoral crony has been put in charge, greatly reducing the kill rate. Given our city’s history of mayors since I have lived here, I’m not particularly inclined to vote someone out who I generally believe is doing a good job. So, I was leaning toward Strickland.

However, it bothers me a lot that Strickland is refusing to debate Sawyer. It strikes of white privilege, as though he’s using his power to deny her the right to appear as an equal to him on a debate stage. It also makes me wonder if Strickland is scared to debate, sensing that Sawyer might be a good enough orator to tilt the vote her way. Therefore, if Strickland does not agree to a debate before early voting starts, I am swinging my vote over to Tami Sawyer.

By the way, an image of the latest cover of Memphis magazine was being posted on Facebook yesterday, and I hope it is a sick joke and not the actual cover. All three mayor candidates were portrayed in unflattering caricatures. The problem with it was, when I saw the caricature of Tami Sawyer, it immediately reminded me of renderings I have seen of what Australopithecus afarensis might have looked like. A. afarensis is a human-like ape that lived about 3.9 to 2.9 million years ago, and which is very possibly an ancestor of the Homo (human) lineage. If that is the real cover and not just a joke that went viral, Contemporary Media needs to issue an apology. Surely it’s possible to caricature a black person without likening them to an ape.

Programming note: There almost certainly will not be a blog post on Monday. That will probably be my last Bardog Monday before I begin making changes I need to make to get my life back in order. On holidays I like to get there super early to get a good seat. There will probably be a post tomorrow.

Bardog it is then.