Yesterday I saw something I haven’t seen in many years: a lemonade stand. Two little girls, I’m guessing about 10 and 7, set up a table in front of the Shrine Building, selling lemonade, sweet tea, lemon bars, and cookies as their father looked on from a distance. Their business didn’t last long as numerous people made purchases and they sold out. Downtowners are generous.

I have friends who like to shotgun White Claws on bar patios. They might want to know about this: 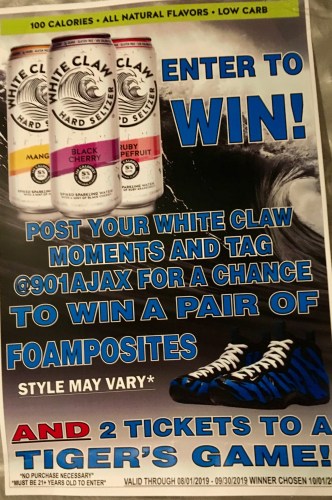 Let’s have a look at some of yesterday’s college football results:

Memphis 15, Ole Miss 10: Solid win for the Tigers but it bothers me a bit that they didn’t cover the spread, which was said to be 5 1/2 a few days before the game and 7 at game time. I’m not a betting man so it didn’t matter to me personally, but I would have preferred to see the Tigers overachieve. Next week they’ll play Southern and have an opportunity to fine-tune their performance.

Arkansas 20, Portland State 13: I didn’t know Portland State existed prior to yesterday. The fact that the score wasn’t more like 55-13 tells me Arkansas probably isn’t going to a bowl game this year. At least they beat their cupcake opponent, unlike some SEC schools, such as…

Georgia State 38, Tennessee 30: BWAHAHAHAHAHAHAHA! Tennessee lost to a Sun Belt team at Neyland Stadium! The Panthers probably got an appearance fee around $800,000 to come to Knoxville and lose… except they didn’t lose. I would love to have been a fly on the wall at Max’s Sports Bar yesterday, to see the look on all those Vol fans’ faces. “Well, things may have got off to a bad start at good ol’ Rocky Top, but let me tell you wut, boy… next year, 2020, that’s GONNN BEEEE ARRRRRRRR YEAR.” Yeah good luck with that.

Get your pets ready for The Blessing of the Animals on October 5: 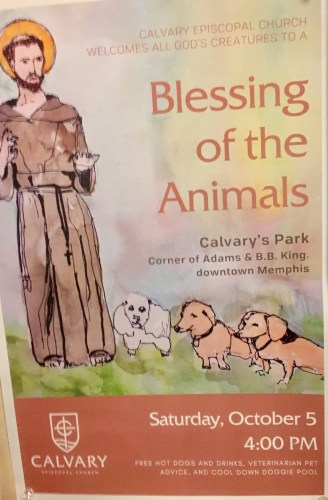 Tickets are now on sale for Cooper-Young Beerfest. Those of you who are longtime readers know what I am about to say. If you love beer and love learning about beer, this is the one Memphis beer festival you need to attend. It seems like the point of some beer festivals is to see and be seen and get your photo in RSVP magazine (is that even still around?) or Michael Donahue’s Memphis Flyer column. Not this one. CY Beerfest is different and better because

Well worth the cost of a ticket and a Lyft or Uber ride out there.

That’s it for now. Reminder: no post tomorrow. Back Tuesday (probably) with more news.