This morning I returned to River Time Market & Deli on the south side of Court Square. I knew what I wanted: One of their breakfast cornbread sandwiches. They come with

Your choice of meats

Your choice of cheeses 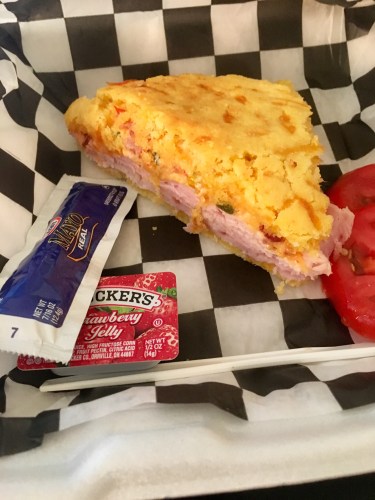 Look at that beautiful sandwich! They loaded that thing up with ham, and the bacon jalapeno pimiento cheese was a good call for sure. The price is $4.99 and if you showed me the photo above, I would think that was a fair deal. But this was only HALF the sandwich! I pulled it apart for photographic effect. Half the sandwich easily filled me up so the other half is in the refrigerator for breakfast tomorrow.

By the way, you may be wondering why the troll has not appeared in any of my River Time sandwich pics. That’s because I submit the photos to the Memphis Sandwich Clique Facebook group, and I want the attention to be on the sandwich, not the troll.

While Pam was making my sandwich, I took an inventory of what is in their grab & go case.

Yesterday I got an email from one of my readers saying, “You really weren’t kidding about River Time!” She got a sandwich from there and took it back to work, where she showed it to her co-workers. They immediately called in 4 orders. That makes me happy and is the very reason I write this blog. I don’t need to win the Memphis Flyer poll anymore; I’ve done that 4 times already. What gives me the fulfillment I need to keep writing is knowing that my posts make help those who live and work Downtown have a richer experience. It’s knowing that great local businesses do well because of what I wrote.

Really, though, the credit in River Time’s case should go to the Memphis Sandwich Clique. I know they are a polarizing group. I know some people get turned off by their insistence on locally-owned sandwich shops only, and the fact that the same restaurants (Sam’s, Mrs. B’s, RAWK’n Grub) get posted over and over again. But, the fact of the matter is, the Clique WORKS. Restaurants that might have gone out of business (and if not for the Clique, I would be seriously worried about that in River Time’s case) are now seeing lines out the door and making more profit than they ever thought possible. People are discovering sandwiches they never would have otherwise known about. I want to do everything I can to get River Time talked about on the Clique as much as Sam’s Deli is. And if my posts on my blog and on the Clique cause me to have to wait an extra 15 minutes in line to get my sandwich, you know what, I’m OK with that.

Yesterday some of us Downtowners were discussing the fact that in some years, the Southern Heritage Classic and Cooper-Young Fest fall on different Saturdays, while on other years (including this year) they fall on the same day. What steps could the organizers take to ensure that these two events never fall on the same day, avoiding traffic snarls in southeast Midtown and enormous Lyft and Uber upcharges?

In my opinion Southern Heritage Classic should not have to change dates in future years to avoid this conflict. As far as I can remember, it has always been the second Saturday of September, so the 8th through the 14th. Although Cooper-Young Fest is probably the more heavily attended event over the course of its 10 hours, Southern Heritage Classic has a much heavier economic impact on the city. Also, the Classic has to work around the Memphis Tigers’ schedule for booking the Liberty Bowl, and probably is already booked years out, making it harder to move. Whereas, I would venture a guess that very little planning has been done for next year’s Cooper-Young Fest.

Thinking back to previous years, and correct me if I’m wrong here, the organizers of Cooper-Young prefer a date in the teens, so September 13-19. Why couldn’t they always make their event the third Saturday of September, making it a day between the 15th and 21st? That way they’d never conflict with the Classic. The average high and low on the 21st are 83/63 I believe. There’s almost zero chance it would be so cold that people wouldn’t show up, and there would be a slightly greater chance that August-like weather with 90s and humidity wouldn’t stick around that late in the year.

Let’s get on to the news…

The Memphis Union Mission will start accepting requests to volunteer for their annual Thanksgiving Feast on October 1. The feast will be Wednesday, November 27, the day before Thanksgiving. The times for which volunteers are needed are

They ask that each person bring a cake or dessert in a disposable container (meaning, you won’t get the container back). Not every volunteer will have direct contact with those being fed; some will wash dishes, sweep up, or do other non-contact work. Email rdaniels@memphisunionmission.org if interested in volunteering, and provide the following information:

Atomic Rose restaurant & nightclub has announced that beginning next weekend, they will have drag shows every Friday and Saturday night from 10:30 to midnight. They encourage everyone to come out and see their new Saturday night performer, Bella DuBalle.

Meet Jason March, the new coach of the Memphis Hustle, the Memphis Grizzlies’ developmental G-League team. Follow the coach on Twitter at @jasonlmarch.

There will be a gin tasting at The Greyhound Bar on Tuesday, September 17 from 6 to 8 PM. Appropriate for newbies and experts alike, you will taste 4 different gins and each will be paired with a small plate. Tickets are $55 plus tax in advance and include up to 3 hours of complimentary parking. Seating is limited, so get your tickets early. The Greyhound is at 201 Union in the hotel across from the ballpark, its name a nod to the bus station that preceded it in that location.

Eric Gales is getting his note on Beale Street, and there will be a celebration at B.B. King’s today at 4.

If you need duck feet for your recipe, there’s now a place in Memphis where you can get them.

Avoiding the hustle and bustle of the festival and football game? It’s a great day to be Downtown, which will be much deader than usual. My recommendation? Come to the Silly Goose, and no I am not about to post another picture of my troll looking at one of their wood-fired pizza pies. We have a couple of guest bartenders today. First of all, Jessica, who normally bartends Wednesday-Friday happy hour and Saturday nights, will be behind the bar. She has a big following and a lot of the happy hour crowd is likely to make an appearance to see her. However, she’s not there just to pour drinks; she’s there to train another bartender from the Daniel Masters family of bars to work at the Goose. Who, you ask? Well, just let me say this…

Yes, that Brad. B-RAD. Currently the Sunday bartender at Pontotoc Lounge, formerly the Sunday/Saturday bartender at Blind Bear which is where I met him. He’ll be there from 2 to 8. There was a thread about it this week on Facebook, and they were trying to get the South Main clique to come up to the Goose after they get done at Cooper-Young. Betcha one of the people in that group will be vehemently opposed to entering any bar which Brad tends, even if she is 100% certain I am not there.

All right, time to get in the shower and start my day. For the first time in over a year, it feels like I have earned my Saturday, having put in a 5-day week. Back tomorrow with more news, if I can find any, and I will catch you up with what’s going on with me personally and where my mind is at.