River Time Market & Deli, the little shop on the south side of Court Square next to Blue Plate Cafe which has gained a reputation for its incredible sandwiches, is expanding its menu to include soups. They are going to start with two soups a day on the weekdays and will have four a day by the end of October. Once they get there, they plan for the soup menu to include

The Boos & Brews Bar Crawl benefiting Ronald McDonald House will happen Saturday, October 26. Tickets are $15 in advance, $20 at the door. Tickets get you free cover at all of the venues and drink specials. The crawl will begin at 8 PM at Bar 409 inside the Puck Food Hall. After that stops will include Slider Inn Downtown, Cafe Pontotoc, Silly Goose, and Bardog Tavern. The after-party will be at Momma’s Roadhouse. Best male, female, and couple/group costume will receive a prize. You must be at the first stop, Bar 409, to enter the costume contest. This event is organized by Red Shoe Society, a group of young professionals whose goal is to build awareness of Ronald McDonald House.

Also on October 26, Tin Roof will have its Haunted Asylum Halloween party. They’ll have Andrew Caibgao at 6 PM and Alex Butler Band at 10 PM. Over in the Green Room DJ Epic will perform a scary set. Costume contest with $250 cash prize, free candy and more.

There will be a port & chocolate tasting Tuesday, October 22 at 6:30 PM at Texas de Brazil. TdB will team up with the Fladgate Partnership and local chocolatiers for this event. Participants will enjoy bites of TdB’s meats paired with port and an educational evening with tasting notes and gourmet chocolate. Note that regular dinner is not included in the ticket price, but those who want to stay and have dinner after the tasting will get 25% off the purchase price.

Shelby County’s first lactation pad has been installed at FedExForum. At Grizzlies games, mama bears will now have a quiet and sanitary room where they can go to breast feed.

Raymond James is seeking a $3.2 million handout from the city to help pay for its move from its Downtown headquarters to the Poplar/Ridgeway area. The company is claiming that 100 new jobs will be created paying an average of $63,970 annually, but that average is skewed by a handful of executive and managerial jobs. The median salary will be $50,000.

When I was a teenager in Little Rock, my mom would get in the car on Sunday mornings and drive out to Broadway, returning home from a fast-food restaurant called Bojangles with the most amazing sausage biscuits and steak biscuits. Well, yesterday I saw an ad stating that Bojangles is looking to move into available markets and a search revealed that one of those desired markets is Memphis. Somebody needs to make this happen!

As your #1 source of news and information about The Edge District, it’s my pleasure to inform you that Juke in the Box happens today at 1 and will happen every Sunday at 1 at Kickspins Memphis, one of the stores in BOXLOT next to the former Kudzu’s on Monroe. They invite you to come spin your favorite record.

It’s Bring Your Dog to Bingo Day presented by Cerrito Bingo at Loflin Yard. Those with a dog get an extra bingo card. There will be prizes and treats from Hollywood Feed and a dog costume contest as well. 10 rounds of bingo from 4 to 6 PM.

Sunset Jazz returns to Court Square today from 5 to 7 PM. Today’s music will be by Neptune’s Army featuring Ed Finney, AKA Jupiter Sky-Fish. Food trucks will be onsite and picnic baskets and blankets are welcome.

Monster Market, the pop-up at 618 S. Main, will have a Whisks of Doom Chicken Biscuit Brunch today at noon. Your alternative to that other chicken place that closes on Sundays, they will have fresh marinated fried chicken on buttery Whisks of Doom Biscuits. I don’t know if I have any vegetarians who read this blog, but in case I do, I will mention that they will have vegetarian chicken available as well. Proceeds from biscuit sales will benefit Friends for Life.

Michael W. Smith performs at the Cannon Center this evening at 7:30.

Today is National No Bra Day.

Off to Silly Goose for D-RANKS with B-RAD. That’s his new Sunday home, it seems! I plan to stick around for the pizza party. 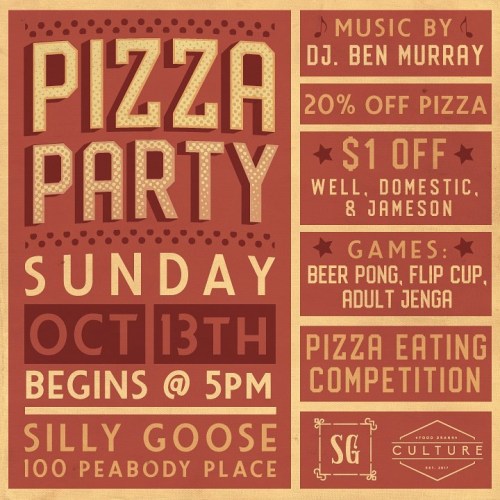 By the way, although it says 5 on the flyer, Daniel said the party would get started more like 3.