Yesterday afternoon I got off work and figured it would be business as usual, straying no further than a few blocks from home, hanging out at the same local spots where I’ve been going for years. My plans changed, though, when I saw on Facebook that Longshot would open for the first time at 4. I tabbed out of Blind Bear and headed down there at the top of the hour.

Longshot is in the new Arrive Hotel, in the former Memphis College of Art graduate school building at 477 S. Main. However, although the address is technically Main, the entrance is around the corner on Butler. It’s a ground-floor bar, giving the place a speakeasy feel.

When you step in the bar, you get a sense of why it has its name. It’s at least 5 times long as it is wide. That makes it perfect for the bar’s signature form of entertainment: shuffleboard tables. They have 5 of them. 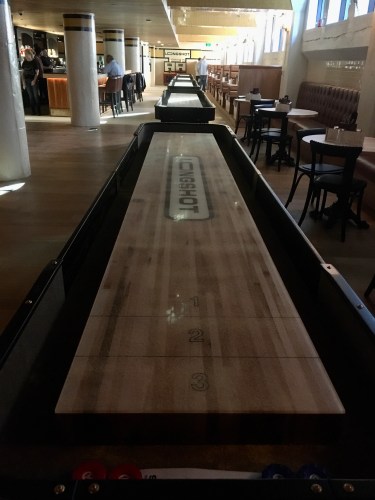 Yep, you don’t have to go out to Alex’s anymore to get a game of shuffleboard in. It’s free to play.

I took a seat at the bar and immediately recognized some familiar faces. Hannah, who I know from Loflin Yard, Aldo’s Pizza Pies Midtown, and years ago, the Flying Saucer, was bartending. She is one of my all-time faves and I am thrilled to see her working at a bar that is walkable distance from where I live. Also behind the bar was Keagan, who I recall from Bar 409 down the street. The other bartenders were super cool too.

The familiar faces didn’t end behind the bar, though. The GM is Dax Nichols, a Downtowner for many years, a former GM of the Downtown Huey’s and other Huey’s locations. His presence gave me high hopes for the place, knowing that someone who does the restaurant business right is in charge.

However, I also had doubts – no matter who runs the place, it’s still a hotel bar. Would the owners and investors force the place to cater to tourists, to be too uppity to appeal to locals? Let me post the cocktail menu and you’ll have your answer. Look for one line on the menu in particular (click image to view in a larger size): 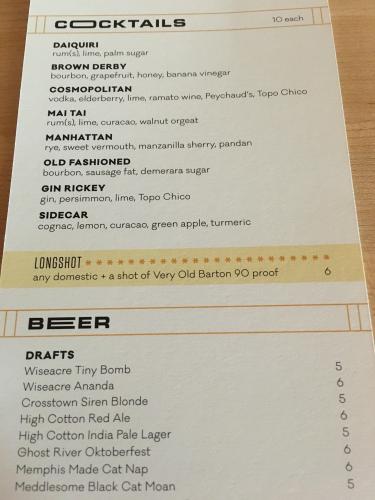 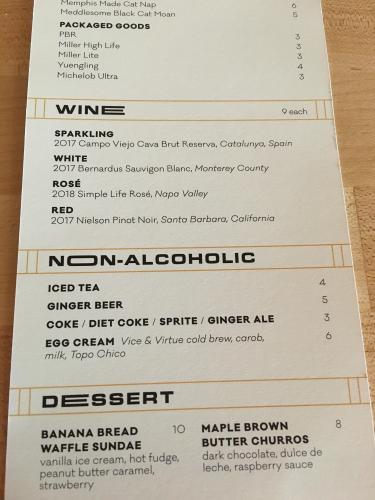 (Hint: Top of the “Packaged Goods” section in the second image above.)

They GET it! They have the Cadillac of beers at a reasonable price point. That’ll bring the locals in time and time again. It’s too bad some other Downtown bars (looking at you, SAUCER) can’t figure out how to do that. They also have Miller High Life (that’ll bring Buddha in, I’m guessing), Miller Lite,. and Mich Ultra for 3, and Yuengling for a very reasonable 4.

Now for the bad news: They don’t actually have those products yet, because the hearing for their beer license is not until Wednesday. So for now your choices are craft cocktails and wine. This is the first time I can ever remember a bar getting its liquor license before its beer license. Usually the ABC screws you around for weeks before granting the right to serve liquor.

I love a good Old Fashioned, so I had them make me one. Tasty indeed. Once I had drink in hand, I walked around the bar and took some more pictures. Longshot is known for their house-made sausages, with buns from the bakery upstairs. Here’s a look at the food menu (again, click for a larger size): 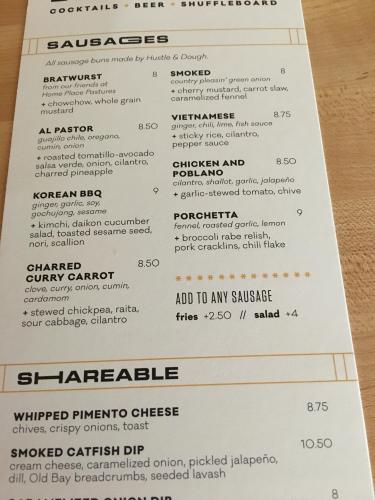 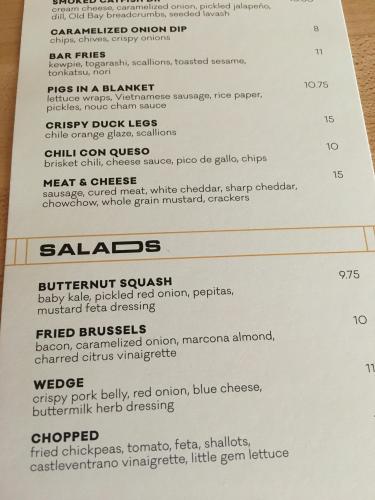 I was impressed with the variety of sausages they offered, including Korean BBQ style and Vietnamese style (and I’m pretty sure I know exactly which Downtowner influenced those making it onto the menu). Although I’d finished off my remaining half of a Smurfey’s Smokehouse baked potato for lunch, I couldn’t resist ordering Longshot’s signature food.

Here I messed up, though. I saw the “charred curry carrot” sausage with stewed chickpeas and raita, and figured it was an Indian take on Longshot’s house-made sausages. I love Indian food, and put in an order, with fries on the side. What I didn’t realize was, that is Longshot’s vegetarian offering, and the carrot is the sausage! 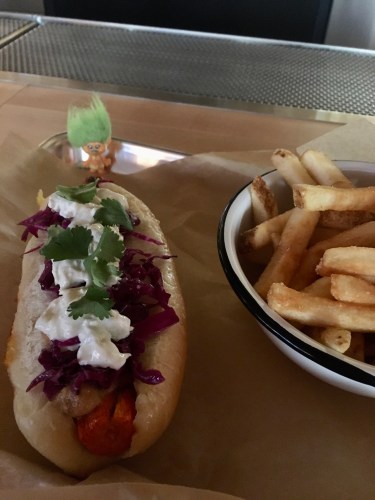 It wasn’t bad, but it wasn’t what I was expecting either. I ate it though. I’m not a believer in sending food back when I am the one who screwed up by ordering it. If you’re a vegetarian I think you will like it. Fries were really good.

I finished my Old Fashioned and it was time for a second cocktail. Knowing Keagan to be a master mixologist, I asked him what his favorite cocktail was other than the Old Fashioned. He recommended the Sidecar, with cognac, lemon, curacao, green apple, and turmeric. They have 3 TVs behind the bar, but as of last night they did not have cable hooked up.

You know, for years I have talked about my “Big Five” homes away from home: Bardog, Blind Bear, Flying Saucer, Silly Goose, and Max’s Sports Bar. Saucer got booted off the list when they insulted their customers by finally giving into demands for PBR cans but charged $5 for them. So I was left with three homes in the core, Bardog, Bear, and Goose, and one in South Main, Max’s.

Longshot felt like home the minute I sat down at the bar. It reminded me of my very first visit to Bardog the day it opened, in September 2008 – I immediately got the sense that I would be spending a lot of time there.

With Slider Inn/Out soon to open, I’m going to have as many homes away from home in South Main as I will in the Downtown core. I foresee myself spending considerably more time in South Main in the near future. Don’t worry, though, I won’t start hashtagging #southmainfam in my social media posts. Nor will I turn in my blue koozie for a green one, even though in 16 days I will meet the minimum age requirement to do so.

Longshot is open 4 to midnight daily. Hmmm staying at Longshot ’til close on a weekend night and then sliding over to Earnestine & Hazel’s… that’s a possibility.

I will be back, although I will wait until they get their beer license. Great job Dax and crew on an excellent addition to South Main.