The street was packed as early as 5:30. Memphis was well-represented on national TV, both in the morning on GameDay and in the evening with a victory over SMU, previously undefeated and the highest-ranked Group of Five team in the AP poll.

The Tigers will climb in this week’s poll, and we will see how they are ranked in the first CFP poll to be released Tuesday. Higher-ranked Appalachian State lost yesterday too, helping clear the path for Memphis to a New Year’s Six bowl. The Tigers will need to win their November 29 home game against higher-ranked Cincinnati for that to happen, and they may also need Boise State to take a loss sometime this month. Boise State’s remaining games are against Wyoming, New Mexico, Utah State, and Colorado State.

I looked up the Tigers’ bowl history and they have never been to a New Year’s Six bowl (Rose, Orange, Sugar, Fiesta, Cotton, Peach). Their most prestigious bowl appearance was probably in Memphis’ own Liberty Bowl in 2017. If the Tigers win out and win the AAC championship game, they could be romping in Cotton in a couple of months.

Just looked at the AAC standings… Memphis could have to go through Cincinnati twice in two weeks to make it to a New Year’s Six bowl. That will be rough. Cincy has only one loss, and it was to a team that is now in contention for a playoff bid, Ohio State.

Farm Fest is today 5-8 at Puck Food Hall. This is the Memphis Farmers Market’s end-of-season celebration and the Market’s biggest fundraiser. Come on out and enjoy food from some of the best restaurants in town, coordinated by Felicia Suzanne Restaurant. The beverages will be flowing and there will be live entertainment by Shufflegrit. Tickets are $50.

Memphis Farmers’ Market normally runs one Winter Market every year, and this year they are doing a really smart thing: They are having a Turkey Market Saturday, November 23 under the pavilion at Front and G.E. Patterson where you can buy everything you need for Thanksgiving dinner.

The bird has landed! 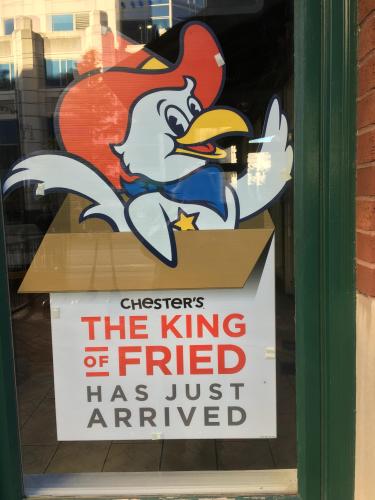 Yep, Chester’s fried chicken, sold in the better truck stops all over Arkansas, is now available at Bluefin, an Asian fusion restaurant. Why anyone would want truck stop chicken when Gus’s is three blocks away is a mystery to me, but hey, cheers to Bluefin’s owner for thinking outside the box… or should I say thinking outside the bucket.

Michael Donahue has a Flyer piece on Bailey Parks Patterson, the Gray Canary sous chef who heats things up on stage as well as in the kitchen.

Today is First Sunday artists’ market day at Westy’s. Things will get going around 2.

Memphis Made Brewing Co. hosts its sixth annual MALTED festival this coming Saturday, November 9. The fun starts at 1 PM with the first 100 people getting a commemorative MALTED pint glass. They’ll unveil a couple of new beers, including Stout Junt, a collaboration with Phillip Ashley Chocolate, as well as Memphis as Truck, a coffee stout brewed with French Truck Coffee. They’ll also have Nut Remix, Drew’s Day Off, and more malty beers. New Ballet Ensemble will perform parts of Nut Remix, followed by live music by Cassette Set and Relentless Breeze. At 7:30 Comma Comedians will take the stage for some stand-up comedy. The Grub food truck will be onsite for those who get hungry.

A work colleague told me Friday, “They say you’re a conglomeration of the five people you spend the most time with.” I guess that makes me a bartender then.

Memphis Brewfest 2020 has been announced for March 28 on the field of the Liberty Bowl. Man… they are gambling on the weather, putting a festival that early in the spring. Most of the time the weather is nice (normal would be about 68/47 I think) but it can be chilly… see today for example, when the normal high and low would be about 68/47 as well.

Are you a fan of chefs Andy Ticer and Michael Hudman (Gray Canary, Catherine & Mary’s, soon-to-open Bishop French brasserie)? Next year you can take a food tour of Italy with them.

That’s it for this post. Off to Silly Goose for D-RANKS with B-RAD. This week I made it a point to eat before going out so I won’t be tempted to order a pizza. Back tomorrow with more news.