I know I have many readers who read this blog Monday through Friday at work. If you’re one of those people, and you didn’t come here over the weekend, I encourage you to scroll down and read Saturday’s post. I know, I know, I said there wouldn’t be a post on Saturday, but Friday afternoon a great new locals’ bar, Longshot, with an emphasis on shuffleboard and house-made sausages opened for the first time. I have plenty of information and photos in Saturday’s post.

Today is one of my least favorite days of the year. It’s the first day since last winter when rush-hour commuters will drive home in the dark. For some reason it seems to make Memphis drivers even more crazy than they usually are. Remember, people:

The Salty Dogs running group is taking a run across Big River Crossing tonight at 7. It’s free to join them. They begin and end their runs at Bardog Tavern, and after the run there are specials for runners in the Underdog Room. The total distance of the run is about 6 miles.

Mystery Train, the 1988 movie that put Memphis and South Main on the map in the world of filmmaking, will have a special screening at Malco Powerhouse Thursday at 6. The screening will be just a short walk away from where much of the movie was shot.

The Grizzlies host the Houston Rockets tonight at 7 at FedExForum.

Eric Barnes, CEO of The Daily Memphian, answers subscribers’ question “Why can’t I stay logged in?” Folks, as someone who spent many years as a developer, I can tell you that the struggle is real and the folks at the DM are doing everything they can to ease your frustration. If everyone were viewing a website the same way, it wouldn’t be hard to keep people logged in. But when you have to deal with Chrome and Safari and Firefox and Microsoft Edge and people still using Internet Explorer 9 and iPhones and Androids and Apple computers and Windows computers (including a few still running Windows 95 – no kidding, I have seen this) and people opening subscriber-only links from their email app or their Facebook app or their Twitter app, there are a lot of subtleties that have to be addressed.

Yesterday I was at the Silly Goose and pizza masters Parker and Dylan were experimenting with the wood-fired oven. “Paul, come try a slice of our latest creation,” they said. “We’re calling it the Rajun Cajun or the Coon Ass. It’s a Cajun-inspired pizza with Creole seasonings.” 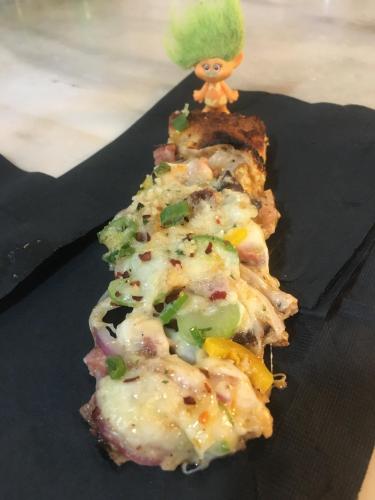 This was incredibly good! If you look closely, you’ll see jalapenos on there, which made me happy because it gave the pizza a bit of heat (it also made my troll happy because the jalapenos are the same color as her hair). Meat-wise, the flavor of the ham on this pizza comes through great. I hope this pizza earns a spot on the menu or at least the special board. You’ll definitely want a glass of ice water on the side for this one.

MakeUseOf has ways to find all accounts linked to an email address. This can be useful for not only privacy purposes, but if you need to update a credit card number for auto-payments.

I’m going to try to go through the Downtown Dining Week menus soon and do a Paul’s Picks list of places that really go out of their way to deliver a great DDW experience. DDW starts Monday, November 11 and runs through Sunday, November 17.

Off to work. Back tomorrow with more news.