I’ve mentioned Skrewball, the new whiskey that tastes exactly like peanut butter, on this blog a few times now. If you haven’t tried it yet, go to Quench, the liquor and wine store across Second Street from the Peabody, this Friday between 5 and 7. They’ll pour samples of Skrewball and also of Jack Daniel’s Apple Whiskey.

Big Cypress Lodge at Bass Pro at the Pyramid will postpone the opening of its outdoor bar until spring. Probably a good call. The low is supposed to drop to 22 one day next week. Not many people want to be outside when it’s 22.

Arrive Hotel will celebrate its grand opening tomorrow from 5 to 8, with Butler closed between Front and Main. If you go, be sure to check out Longshot, the new bar in the basement of the hotel with the entrance on Butler. Shuffleboard, house-made sausages, and craft cocktails.

The American Legion will hold its annual Veterans Day Parade Monday. It will begin at Second and Exchange, and go down Second until its end point at Monroe. Come out and thank the veterans for their service!

All Elite Wrestling, the new promotion broadcasting on TNT, will come to the Landers Center in Southaven for the Wednesday, January 8 broadcast of its weekly TV show AEW Dynamite. Stars like Chris Jericho, Kenny Omega, the Young Bucks, Cody Rhodes, Dustin Rhodes, Jake Hager (formerly Jack Swagger), Pac (formerly Neville), and Jon Moxley (formerly Dean Ambrose) will probably be there. AEW will be in Memphis only five days after WWE’s live Smackdown broadcast from FedExForum.

Save the date: Mix-Odyssey, the premier annual Memphis competition for mixologists, will return for its 7th year Friday, March 6 at the Botanic Garden. More details to come soon.

Central Station Hotel’s in-house restaurant Bishop is now hiring. The French brasserie needs servers and bartenders. I bet you would make some good tip money at this place. Email your resume to estamper@centralstationmemphis.com to apply.

Very cool story: A dog has learned to talk by using a custom soundboard. She already knows 29 words and can form phrases. When she was whimpering by the door, her owner assumed she needed to go out. But she got on the soundboard and indicated that she missed her daddy and wished he’d come home. When he arrived, she touched “happy” on the soundboard.

Primas Bakery + Boutique on South Main is taking advance orders for Thanksgiving dessert. This is what they have on their menu:

As of yesterday there were only two pizzas left on the Silly Goose pizza menu that I haven’t tried, and a friend offered me a slice of one of those two yesterday. I present to you the Mr. Peabody. 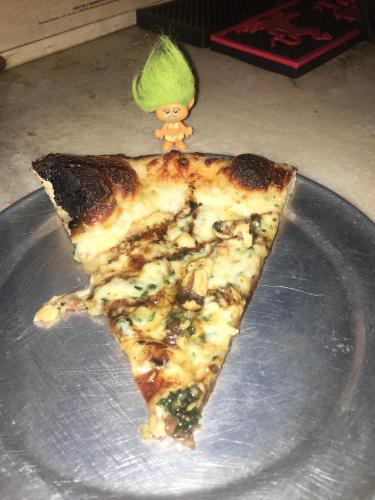 When you hear the word “Peabody,” you probably think of ducks. The Mr. Peabody is so named because the meat on this pizza is duck pastrami. Other ingredients include brie, honey crisp, arugula, balsamic, walnuts, and chili honey. The reason I did not try this one for so long was that I wasn’t sure about sweet-tasting items on pizza, nor walnuts. The kitchen staff nailed it, though, as they have every other pizza, the flavors all coming together and the texture of the walnuts adding to the experience rather than detracting from it. The Goose has pizza happy hour (any pizza on the regular menu $10) 2-5 Monday-Tuesday and 4-6 Wednesday-Friday.

Off to work. My job continues to get even more interesting. Back tomorrow with more news.