For the fifth time since September 21, a Downtown institution, a business that raises tens of thousands of dollars for the kids of St. Jude every year, Bardog Tavern, has been forced to close unexpectedly. For years – at least the past four that I can recall – the city has been digging holes in the streets and alleyways around Bardog, repairing their outdated sewer line. Five times their sewer line has collapsed, breaking into Bardog’s sewer line, and/or flooding The Underdog, Bardog’s downstairs bar. One of those times they had to close for almost a full week. As of this morning I am not sure whether Bardog will be open for my usual Saturday morning visit tomorrow.

11 years ago, Aldo had a vision for a bar where people who live nearby would come together for drinks, unusually good bar food, and conversation. He brought that vision to life, and it’s a big part of the reason Downtown is the most neighborly part of the city.

With Bardog, the two Aldo’s Pizza Pies, the two Slider Inns, Momma’s Roadhouse, and the Slider Rider food truck, Aldo has created many, many jobs; he has created multiple sources of tax revenue for the city; and he has made Downtown and Midtown more desirable neighborhoods for people to visit, work, and live. The city should be bending over backward to make sure a guy like this does not have any issues operating his businesses.

I have to wonder, if the first and basement floors of 73 Monroe were occupied by a bank or a prominent law firm rather than a bar, would the city devote more resources to the matter?

A new hotel has “arrived” on South Main. The CA has a taste (including photo gallery) of what you will find at the new Arrive Hotel, including Hustle & Dough Bakery + Cafe, Vice & Virtue coffee shop, Bar Hustle on the north side of the hotel lobby, and Longshot shuffleboard bar downstairs. See my post last Saturday for a look at Longshot. There’s a grand opening ceremony today with a ribbon-cutting and speeches at 4:30 and tours and samples of hotel food commencing at 5. Free food? Wonder if the Nuh-Uh Girl will… oops, forgot she’s in Europe.

I’ve heard that Longshot now has beer in bottles and cans, with taps to go in today. I plan on making a stop down there today to try one of their house-made sausages (made by sausage master John Haley) on a Hustle & Dough bun. I’m going to be sure and ask, “This isn’t vegetarian, is it?” this time when I order.

Tom Intrator, the developer who is remodeling the building at 18 S. Main (and let me tell you, as a resident of 10 S. Main I know that a lot of that remodeling happens at 5:30 AM), has a few more projects up his sleeve. Blighted, abandoned 107 S. Main, which sticks out like a sore thumb on a block that is mostly thriving, may finally be turned into something. He’s also got some ideas for South Main and the area near Gus’s Fried Chicken.

As we get closer to turkey day, we’re starting to see more restaurants advertise “let us do the cooking for you to pick up and take home. Regina’s Cajun Kitchen at 60 N. Main is running such a special. Choose from

Orders must be placed by November 19 and must be paid in full at the time of the order. Visit Regina’s Cajun Kitchen Facebook page for more information.

For a computer nerd like me this is a very cool development: The Daily Memphian reports that the city is now offering a data hub where you can access data on things like code violations and police calls. Since I have to be at work shortly, I don’t have time to investigate this hub as much as I like, but I see links to “API Docs” for various types of data. Holy crap, can you pull back JSON-formatted data from this thing? I will dive deeper when I have the time. Exciting!

I was in the Silly Goose yesterday afternoon when their order of printed menus for Downtown Dining Week came in. Here’s a look: (click to view in a larger size) 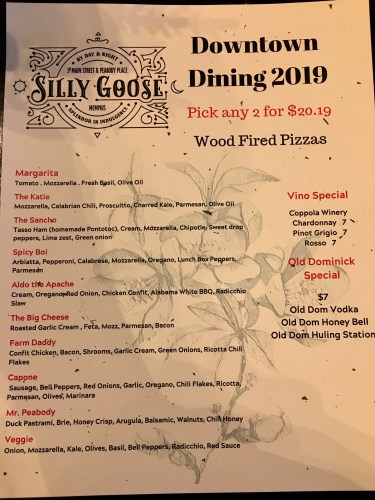 These pizzas run up to $14 each at regular menu price, so you’re getting up to a $28 value for $20.19. I’ve had at least a slice of every pizza on this list except the Margherita, and let me tell you, they’re all good. They have $2 domestics (including 16 oz. cans of PBR) during happy hour which lasts until 8 on weekdays, which will save you even more money.

I LOVE the new feature for iPhones on AT&T, where you have the option to send calls from numbers not in your contacts directly to voicemail, without even a ring. Now I don’t have to keep my phone in Silent Mode all the time to avoid getting distracted by spam calls.

Off to work… I’ll be down at the Arrive Hotel and particularly Longshot this afternoon. Back tomorrow with more news.