Mike Conley returned to Memphis last night, where his new team the Utah Jazz lost to the Grizzlies in a thrilling 107-106 game. Here are some video highlights from the NBA. In particular, watch the second video, the Grizzlies tribute to Conley played during the first timeout.

Listen in to @MCONLEY10 mic’d up before tonight’s action in Memphis! pic.twitter.com/yytHMOmfQU

End of the 1st on @ESPNNBA pic.twitter.com/vAkt8fmuwO

Solomon Hill pokes it away to secure the @memgrizz victory! #GrindCity pic.twitter.com/oZxwYy0Jcp

One last weekend in my 40s before I enter the land of AARP memberships, denture grip, prunes to keep me regular, AOL email addresses, afternoons at the bridge club, 4:15 Early Bird dinners with senior discount, and warm milk before an 8 PM bedtime. Let’s see what’s going on…

There’s a big event at the Blind Bear this afternoon. Having seen the success of The Ultimate Brunch Set back on Labor Day weekend, the organizers decided to do it again. There will be five DJs over the course of the afternoon. Art will be on display, and there will be someone there who can hand-roll your cigars. $3 mimosas and Bloody Marys, and the Bear’s fabulous brunch menu including crawfish mac & cheese and chicken and waffles.

If you haven’t checked out the new Slider Inn at Mulberry and Talbot yet, and you’re trying to figure out a good time to go, may I suggest this Sunday evening? The reason why is that this lovely lady posted that she will be working: 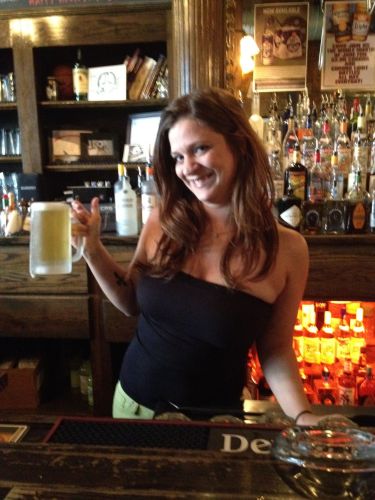 That’s right, it will be PANDA TIME tomorrow evening! Since Slider Inn is open 11 AM to 3 AM, I am assuming the evening shift would be 7 PM to 3 AM. I plan on being there, although not until 3 AM since I didn’t ask for my birthday off work this year.

Your Inner Yogi at 10 N. Second will hold a Winter Ayurveda Workshop today from 1 to 3. Ayurveda is described as the science of understanding your unique self and who you are meant to be, and participants will learn how to adjust lifestyle and food choices to be in harmony with the changing of the seasons. Kandace Stewart will guide you through this transition of the seasons. Reserve your spot YOGA!

Okay. The Saturday news will continue in a minute. Right now, though, I just returned from a run to Family Dollar and I have to go on a bit of a mini-rant. CANDY MAKERS: Stop replacing candy flavors in this list

Then there are candy flavors I’m indifferent toward, like grape, strawberry, and raspberry. Candy makers, I don’t care what you do with those. I’ll eat them if they’re in there. But stop replacing the best with the worst!

Free event at the Halloran Centre today at 3 PM and Monday at 7 PM: From Where I Stand: Stories from Home. The Centre will partner with the Refugee Empowerment Program to let youth explore the basic question: What is home? Home means different things to different people. Sharing their concept of home will empower the participants in this event. The Saturday performance will be interpreted in sign language for the hearing-impaired.

While we’re on the subject of free stuff, let’s check in and see how the Nuh-Uh Girl is doing. For my newer readers who aren’t familiar, the Nuh-Uh Girl is a friend and former neighbor of mine who was a fixture on this blog from 2006 to 2014. She was known for showing up at any event where there was free food. In buffet situations, she would sometimes go back for as many as nine plates. For Downtown Dining Week she would have a spreadsheet of all the restaurants and would squeeze two and sometimes even three dinners into one evening. If you were out with her and you ordered food, she’d ask, “Can I have a bite???” with a big smile on her face. If you posted a photo of food to Facebook, she’d comment, “Leftovers?

The Nuh-Uh Girl embarked on a fall tour of Europe a couple of months ago. She went to Oktoberfest in Germany. After that she went through Italy, then France, and now she has made her way to Spain. Let’s see what she thinks of that country:

Oof I can already tell Granada is going to be rough in the best possible way. You get a free “real” tapa with every drink. So you either buy food or just keep buying cheap drinks and getting delicious snacks. E.g. all this for less than 7€!

Elmo & The Shades play the Folklore Hall at the Center for Southern Folklore tonight at 7. To get to the Hall, enter the Gayoso House/Pembroke Square complex through the doors just north of the Center, and go all the way to the back. I’ll give you an additional reason to go besides blues and R&B… it’s your chance to get One & Only BBQ without leaving Downtown! They will be there serving dinner.

The Grizzlies will be back in action tomorrow vs. the Denver Nuggets at FedExForum at 5. The Grizzlies are at 5-7, which isn’t great but I think it’s better then what was expected early in the season from this young team. If the season ended today, the Grizzlies would finish 9th in the Western Conference, only one game out of the playoffs and in a position to CONVEY THAT PICK they owe Boston for the Jeff Green trade.

For those who prefer to watch games at the Blind Bear, you’ll be happy to hear that Jeannette has fixed the Bear’s deal with Xfinity, and Fox Sports Southeast 831 is once again working. In other Bear news, Jeannette also told me I’m the password next Friday, November 23. Tell the doorman that Paul sent you that evening and you don’t have to pay cover to come in.

Two events happen at Loflin Yard today beginning at 11 AM. First of all, it’s SEC Saturday with games on big screens with sound. They’ll have Bama vs. Mississippi State and Florida vs. Missouri at 11, Memphis vs. Houston (not an SEC game but we’ll let it slide) and Georgia vs. Auburn at 2:30, and LSU vs. Ole Miss and Oklahoma vs. Baylor at 6 (that last one is not an SEC game either, but who cares, by then everybody’ll be too drunk to notice).

During halftime, or whenever if you’re not a football fan, check out the Modern Market happening at Loflin Yard today 11-5. Over 20 local vendors will be there. Good chance to buy some unique Christmas gifts and avoid having to drive out to suburbia to shop at the big-box retailers.

Man… I bet the big-box retailers HATE the calendar this year. With Thanksgiving as late as it can possibly be this year, the Christmas season doesn’t really begin until the 29th. That leaves people only 26 days of Christmas shopping. Another interesting fact… this year will be a rare occurrence (a 1 in 7 chance) of the Thanksgiving weekend extending into December.

I wonder if anyone has done a research study comparing how much revenue retailers take in the last two months of the year when Thanksgiving falls on the 22nd vs. when it falls on the 28th? That would be an interesting data visualization project.

Then again, some big-box retailers don’t wait until Thanksgiving to come and go before getting started. Santa arrives at Bass Pro at the Pyramid today at 5.

Crosstown Brewing Co. will have a dog event this afternoon. You know the deal, ugliest dog contest, looks most like their owner, and all that crap. Sorry, I don’t own a dog so I don’t get all that excited about these things. There needs to be a “which dog can eat a shoe quickest” contest and they need to allow betting on it, because I’m pretty sure I know who would win.

A “which dog makes the most noise at 4 AM” contest would be a good one too. I have some former next-door neighbors whose toy poodles would be sure winners.

I have not had a chance to listen yet, but The Daily Memphian interviewed Henry Turley on how Downtown development began for this week’s “Extra” podcast.

Don’t forget that tonight is the appearance of nationally-known video DJ, DJ Rons, at Atomic Rose Club & Grill. There will be a drag show by Atomic’s Angels tonight there as well.

Over at the Blind Bear tonight, The Rusty Pieces perform 10 to 1.

The Hello Kitty Cafe Truck will be at Wolfchase Galleria today. Normally I wouldn’t mention an event out in suburbia but I’m sure it’s of interest to one of my readers. He’ll surely stop at one of the Asian places on Germantown Parkway afterward and post pics of his food to Instagram. Bet a friend of his will be interested in tagging along to see if Wolfchase still has that hair extension vending machine.

There’s a Fall Color Cruise at Shelby Forest today at 3:30. Cruise on Poplar Tree Lake is limited to 12 people, so it may be full already; in case it’s not and you want to go, better reserve your spot ASAP.

You, too, can make a difference in this world, thanks to the power of the Internet. Pancho’s recently changed the look of the mascot on its cheese dip tubs, and there is a Change.org petition to persuade the company to revert to its original mascot. Let’s show the world that Pancho’s is The People’s Cheese Dip!

Central BBQ has opened a fifth location – and this one is not in Memphis. If I have any Nashville readers, go to 408 11th Ave. North to get your fill of BBQ nachos and wings and all their other goodness.

Tin Roof, the club on Beale known for great live music, is hiring servers and security.

Edible Memphis returns to Downtown with its latest installment of its Familiar Faces series. This week they interview Jared Summers who works at Hustle & Dough, which recently opened its first brick and mortar location in the Arrive Hotel, 477 S. Main. Jared is the sous chef and assistant baker. Did you know that Hustle & Dough is the first sourdough bakery in Memphis? When not baking, Jared plays the upright bass. Slider Inn is one of his favorite places, and now he can walk to the second location after he gets off work.

Almost Bardog time. I will do my usual and come early to hang out with my “DAWG” John D when they open, and stick around to see my friends Randy and Theresa mid-afternoon. I’m conflicted about whether to head over to The Ultimate Brunch Set at Blind Bear late in the afternoon… the people behind the event, and the people who attend the event, are really awesome. However, if I go I’ll be a nonsmoker in a room full of cigars. Maybe the trick is to get enough beer and shots in me at Bardog that I won’t notice the smoke at the Bear. No matter where I end up, my second to last day in my 40s will be a great one.

Posts may be intermittent and spelling/grammar may be hit or miss between now and Tuesday, but I’ll try to be back as often as I can with more news.