Down to my final 24 hours in my 40s. Yesterday at Bardog, this came out: They all sang happy birthday to me and then it was time for cake. 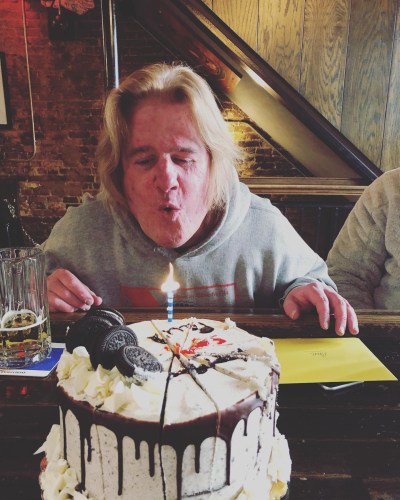 Photo credit Brittany Bloom on that last one.

My friends Randy and Theresa gave me a birthday card and look what I found inside! Half the cake is in my refrigerator. (It’s surprisingly hard to give away birthday cake.) Between that and all the shots I had yesterday, my sugar intake this weekend is through the roof. When I get to D-RANKS with B-RAD at the Silly Goose this morning, I’ll balance it out with a pizza… I can afford one, as you can see, I have Goose Bucks!

Speaking of the Goose, give Edible Memphis a Like on Facebook if you haven’t already… they recently interviewed Daniel, got a look at the wood-fired pizza oven, and sampled three pizzas: Aldo the Apache, the Sancho, and the Mr. Peabody.

You know, yesterday I mentioned the hair extension vending machine that may or may not still be at Wolfchase Galleria. After I published the post, I got thinking about that. Back when I taught at the University of Memphis, I had hair down to the middle of my back. I thought, maybe I could get hair extensions put in and look like that again.

Random thing I learned this weekend: There’s a restaurant in Minneapolis called Bacon Social that serves flights of bacon. A flight consists of applewood, candied, BBQ, habanero, paleo, and chef’s special. For the first time in my life, I want to go to Minneapolis!

For those of you who are fans of the holiday drink, egg nog, it’s now available in the slushie machine at Max’s Sports Bar.

I’d like to congratulate my friends Tree and Prez  who organized Ultimate Brunch Set II at the Blind Bear yesterday. I hear it was a stunning success. Maybe I need to let those guys introduce me to the world of cigars so I can come to their third edition of the party.

The Peanut Shoppe at 24 S. Main has restocked just in time for the holiday season with the following:

Please support this great local business! They are SO NICE and they have lost a bit of street visibility due to the construction a couple of doors down. They have decorative holiday tins, sectioned off so you can include multiple items in one tin. I used to go there all the time to get my mom treats for Christmas. If she were still alive, I would get her a tin that is a sampler of all the different types of pecans. The Peanut Shoppe is located at 24 S. Main, just north of the Starbucks at Main and Monroe.

There will be trolley detours and trolley stop closures on the Main Street line between November 14 and March 2. Read more here.

Sad to hear of the passing of Memphis-area bluesman Zeke Johnson this past week.

Memphis Bartenders Group has announced an event called Quick Draw: Battle of the Spirit Slingers to be held at the Silly Goose Sunday, November 24 at 5 PM. 8 bartenders will compete, and the fastest time wins a championship belt. There will be specials: 20% off pizza, and $1 off all domestic beers, well drinks, and Jameson. David Yancey III will do tattoos at this event. There will be games including beer pong, flip cup, and Jenga.

Today is Bring Your Dog to Bingo Day at Loflin Yard. Those with a dog get an extra bingo card. 10 rounds, 4-6 PM.

Time to get this day started. Back tomorrow or Tuesday or Wednesday with more news.