Yesterday my umbrella, my troll and I braved the rain to make a trip south to Longshot, the new shuffleboard bar in the basement of the Arrive Hotel at Main and Butler. I wanted to try something else on the menu, and this time I strayed away from their signature house-made sausages. My choice was the chili con queso, with brisket chili, cheese sauce, and pico de gallo. 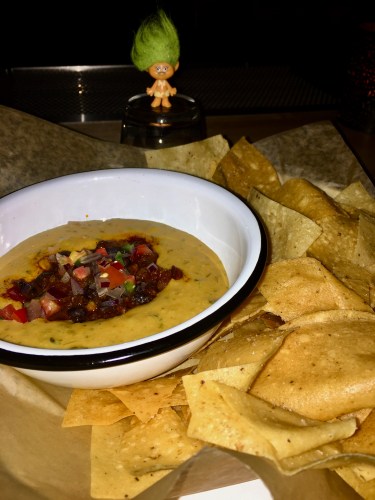 This was SO good! The chips seem to be house-made, fresh and thin, but not so thin that they break in the cheese dip. As for the cheese dip – wow! Even without the brisket chili, this would be a huge hit. With the brisket chili, though, the flavor is outstanding. Although listed under the “Shareables” section of the menu, I had the queso all to myself, and it was just the right amount of food. This may become my go-to when I order food at Longshot.

I was there from about 5 to 8:15, and let me tell you, every time I have gone to Longshot, except the day of Arrive Hotel’s grand opening, I have thought, “Surely the place won’t be busy.” I mean, think about it – last night was a rainy weeknight in mid-late November – who would want to get out, to go to a relatively unknown bar with an entrance on a side street that’s easy to miss?

Well, a lot of people wanted to! By 6:30 or so the place was full! Nearly every bar seat was occupied, nearly every booth was occupied, and four of the five shuffleboard tables were in play. A handful of people there were South Main locals, but the vast majority of the crowd were people I had not seen before.

My next stop was Slider Inn Downtown. Another packed bar, every seat at the bar taken, nearly every booth and table full. That was fine, though, because there was room at the community table in the middle. I grabbed a spot and ordered from the server. I was happy to hear that they now have PBR 16 ounce cans, reasonably priced at $3.50. 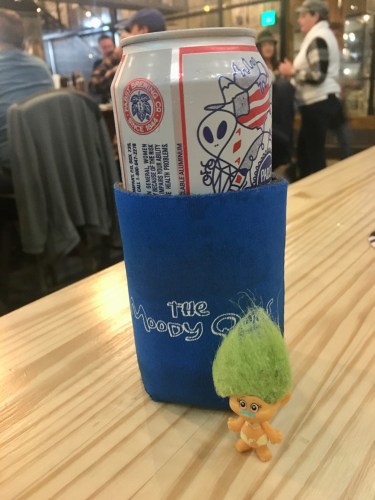 Funny thing about the community table – Bardog regulars took it over! If you looked at that table, you might think you were in Bardog at 4 on a Friday or Saturday afternoon.

Looking around the crowded room, guess how many people I recognized who live in Slider Inn Downtown’s South Main neighborhood: one. Now, I’m sure there were more South Mainers there than that, but I feel fairly confident in saying that the majority of the people there were from an area other than South Main. It’s happened – South Main has become a destination. Very good to see.

Panda is in town, bartending the late shift at Slider Inn through Saturday. Before I left we got a picture together. 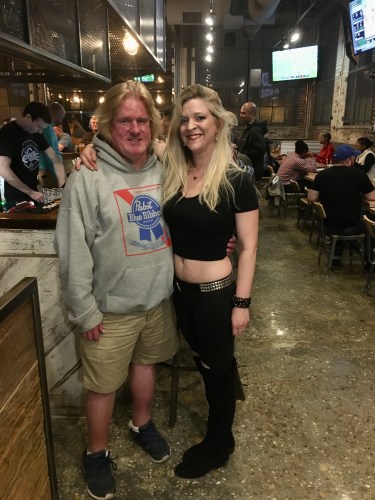 On to the news… Downtown may soon get another place to have a beer. A notice of beer permit application has appeared in the window of 51 S. Main. That’s the former site of DejaVu, Krispy Krunchy Chicken, and other restaurants that didn’t work out. Let’s home this next one, whatever it is, makes it.

Tomorrow is the Turkey Day Market at Memphis Farmers Market, the annual holiday market where you can buy fixings for Thanksgiving dinner as well as decor for your home and holiday gifts. Live music by Charlotte Taylor, food trucks, hot cocoa. Cossitt Library will have a table there where you can do arts and crafts or sign up for a library card. The Market runs 9-1 under the pavilion at Front and G.E. Patterson, behind the Malco Powerhouse. I’m going to try and make it down there before my usual Saturday Bardog stop.

Yesterday I mentioned that a onesie holiday brunch will happen next month at Tin Roof. Get this bean bag onesie and be guaranteed a seat!

That’s it for now. I know this post is a bit short on news today but there’s a reason for that… Comcast was out in the Downtown core much of yesterday, so I didn’t have an Internet connection for parts of the day. Back tomorrow with more news.