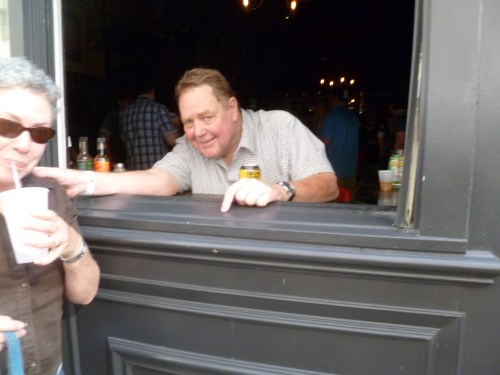 A member of our Downtown community has suffered a setback. On Friday, October 18, Ray Werfelmann, known to many of us as Uncle Ray, was hospitalized with what doctors believed to be pneumonia. However, the following Tuesday they ran an MRI on Ray and found that he had a massive stroke. Ray fully understands everything that is going on around him, but he cannot talk and he is paralyzed from the neck down. He’s said to be a prisoner in his own body, suffering from a condition called “Locked-In Syndrome” similar to what Stephen Hawking had.

It’s said to be unclear whether Ray will ever come home, although knowing Ray to be a fighter, I predict he will. However, even in the best case he will need a nurse around the clock. He and his wife Ruth have insurance, but insurance has lifetime caps and Ray will reach that cap. His friends have set up a GoFundMe to help cover expenses that insurance won’t pay. If you are a friend of Ray’s, please share this link to social media, and if you feel so inclined, a donation would be very appreciated.

One more thing… please keep Ray’s wife Ruth in your prayers. Ray handled all the finances for many years, and now she’s having to figure everything out.

Keep fighting, Ray. We need your reports on the benches and street preachers in Court Square. I believe it is possible we will one day get those reports again. Last night I predicted that I’d be taking photos of you in our booth at BBQ Fest 2021.

The NCAA finally issued a ruling about James Wiseman’s eligibility. The Tigers do not have to vacate the two games in which he played, but he has to sit out 11 more games, making him eligible January 12. That means Big Ticket will miss games against Ole Miss (Saturday, noon, FedExForum), NC State, Tennessee, and Georgia. He’ll also miss conference games against Tulane and Wichita State.

Wiseman also has to donate $11,500 to the charity of his choice, approximating the amount Penny Hardaway gave his family to move to Memphis. How does a kid like Wiseman come up with $11,500, without borrowing it from somebody, which would be another NCAA violation? Is the NCAA willing to let the donation slide until after he signs his first NBA contract?

If you’re a soccer fan, The Brass Door is the place to be tonight at 7:30. They will host a Memphis 901 FC Fan Forum, with Tim Howard, President Craig Unger, and Coach Tim Mulqueen. Come hear what plans are for the 2020 season and there will be a Q&A session.

Check out this beautiful charcuterie plate from my friends at Feast & Graze. 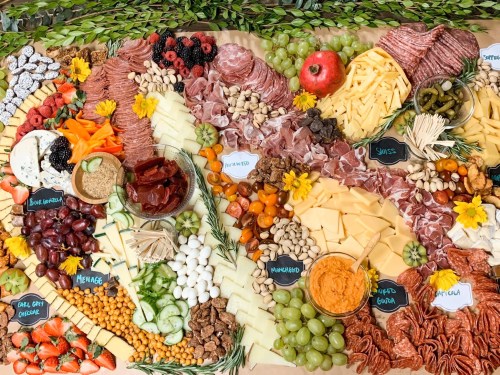 They make custom charcuterie boards and deliver them to your door. Keep them in mind for upcoming holiday parties. You’ll be supporting an awesome local business that makes the Memphis food scene richer.

The Memphis Grizzlies’ G-League team, the Memphis Hustle based in Southaven’s Landers Center, is looking for people to sing the National Anthem at home games.

If you’re a Daily Memphian subscriber, Otis Sanford has a good op-ed piece on why Berlin Boyd lost his city council seat in a runoff. “Council members had their own agendas and were not interested in what the community wanted.” That sentence says it all.

You can own a model replica of National Lampoon’s Christmas Vacation‘s Christmas village, complete with Christmas lights on the Griswold house that actually work.

The kitchen at the Silly Goose did some experimenting yesterday, and my troll and I got a sample: 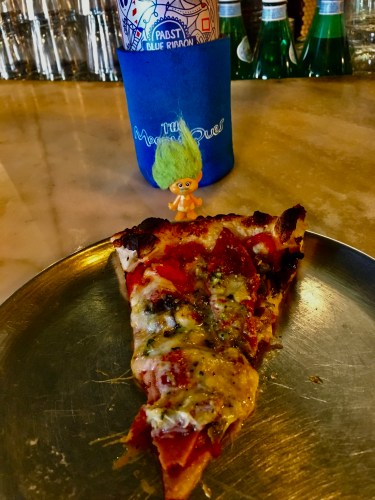 This was The Mighty Muff, a muffaletta on a pizza. I didn’t get the complete list of ingredients, but I heard the chef say it had several types of olives, Fontina, Sopressata, mustard, and more. This is being considered for a place on the regular menu and I hope it makes it.

Convicted felon John Ford, barred running from public office, is trying to run for general sessions court clerk anyway. GO AWAY dude! The city can do better than you. If you want to work in government, ask the Trump administration for an appointment. You’d fit right in!

IrishCentral.com published results of a study that found you’re likely to be happier if you live near a pub.

Cedric the Entertainer and Friends have a show at the Orpheum tonight. Tickets are $60.50 to $90.50.

That’s it for this post. Please don’t forget to share the link about Ray. I’ll be back tomorrow with more news.