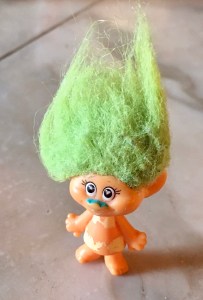 NOTE FROM PAUL: Perjorie T. Roll is my personal assistant and Senior Deputy Director of Public Relations of the Shoulder trophy-winning Moody Ques BBQ team. Today is her 3rd birthday. I asked her what she wanted for her birthday and she pointed out that it’s been a while since she did a guest post. So here we go. I hope I don’t regret this.

Howdy everyone! I’m Perjorie, Paul’s troll. Today is my birthday! It’s also St. Jude Marathon day. I decided not to run this year because my legs are not that long. Massive respect for all the people and trolls who are pushing it to the limit for the kids today.

Yesterday a friend told Paul and me that he recently went to Flava House Lounge, a new restaurant at 95 S. Main #105, next door to Local in what Paul believes is the former Downtown Nutrition space. It’s owned by the same people who run Flava House on Kirby Parkway and our friend said the food is quite good. Here’s a look at their menu. They have a pretty wide range of chicken wing sauces to choose from. When Paul orders chicken wings, I like to stand next to them because the celery is the same color as my hair. They’re BYOB and have set-ups with cups, ice, and juices. Also, they’re a hookah lounge with happy hour hookahs only $15.

Insomnia Cookies on Beale Street is now open. You can get warm cookies to go with your Big Ass Beer or Call-a-Cab until 3 AM.

And now, I would like to present to you my top five bridges to stand under in the city of Memphis.

Turn your TV to ABC for Cincinnati vs. Memphis in the AAC championship game today at 2:30. So many teams named Tigers and Bulldogs and Cougars… and yet not one team named Trolls. You’d think someone would seize on to such a fabulous marketing opportunity. Perhaps the Tennessee Vols wouldn’t suck so much if they changed their name to Tennessee Trolls.

Oh, who am I kidding? Yes they would. In other football news, I’m rooting for Oregon in the Pac-12 game and Baylor in the Big 12 game because their uniforms are the same color as my hair. In tomorrow’s NFL games, I like the Seahawks, the Packers, and the Jets.

The MBJ has an article on Rizzo’s riding the wave of Downtown with Chef Michael Patrick’s decision to open for lunch Tuesday through Friday. With Arrive Hotel open across the street and Central Station Hotel open a block away, foot traffic on South Main has picked up considerably. The meat-and-three for lunch is outstanding. I like the veggie plate because the foods are often the same color as my hair.

The Blind Bear put up its Christmas tree yesterday. 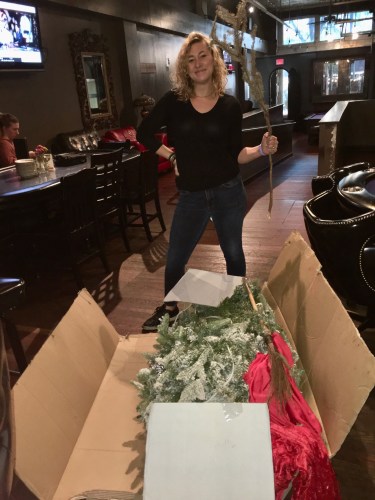 This is a photo of Mary dragging the tree from the storage room to its location up front. Mary: “This is what you get when you get a bunch of drunk people trying to put a Christmas tree back in the box.”  I like Christmas because the trees are the same color as my hair.

Fun for the entire family down the street from the Orpheum, at the Halloran Centre at 3 PM, for a performance of A Cup of Tea at Christmas. Each character in this 4-part show has a particular present they want for Christmas… but they have to remember it wouldn’t be Christmas without peace, love, joy, and trolls.

A poverty expert says that funding public transportation is critical to bringing the city out of poverty. So true!

We’re a little over two months away from Trolls LIVE! at the Cannon Center. Do you have your tickets yet?

One high school has added an adulting class where students learn to do things like paying bills, cooking for themselves, and changing tires. I wonder if there’s a high school somewhere that has a trolling class?

As your number-two source of news and information about The Edge District, it is my pleasure to inform you that Venezuelan restaurant Sabor Caribe is now baking ham breads (panes de jamon). If you don’t like raisins or olives in your bread they can customize it to your taste. Call 901-425-5889 on 901-303-2886 to order.

Recommended: Mondays with Q Whiskey Tastings at Belle Tavern. You can choose from two whiskey tastings:

These tastings are only available on Mondays. Q is so sweet. She always asks “where’s the troll?” when Paul forgets to take me out of his pocket and stand me on the bar.

Stumbling Santa, the annual Downtown pub crawl, starts at the Flying Saucer tonight at 7. Dress up as Santa and bring a toy for the Porter-Leath toy drive.

The Memphis Tigers basketball team has an away game at UAB at 4:30. The game will be broadcast on CBSSN.

That’s the news for today! Paul says we’re leading off at Blind Bear today because Bardog tends to get overrun (pardon the pun) with runners on marathon day. We may wander over to Bardog later in the afternoon once the crowd has cleared out. Paul will be back tomorrow with more news. If anyone wants to buy me a birthday drink today I like PBR and shots of Jameson.