Yesterday I thought to myself, “What am I going to do with my day off? Also, I’m hungry.” I remembered that my visit to Slider Inn on Christmas Eve had been a success, so I decided to give it a try on another holiday. I considered ordering the Nachos For The People, add chili, but I didn’t feel hungry enough to finish an entire plate of nachos. So I picked the Reuben and Cuban instead. 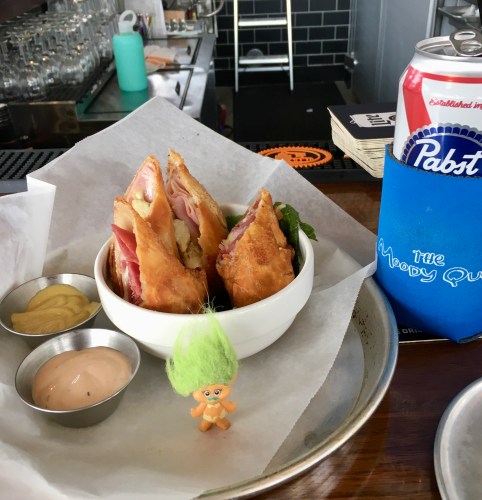 At the time I ordered, I was looking forward to the Reuben egg roll a little bit more than the Cuban, but both were excellent, and the spicy yellow mustard that came with the Cuban roll was the hit of the day.

Due to the proximity to the MLK Day celebration, Slider Inn got busy, and the people around the corner of the bar from me ordered Nachos For The People. I’ll just say this – it looked like it was for at least THREE people! That plate was huge.

While there, I tried a sample of Shiner S’more chocolate marshmallow beer. 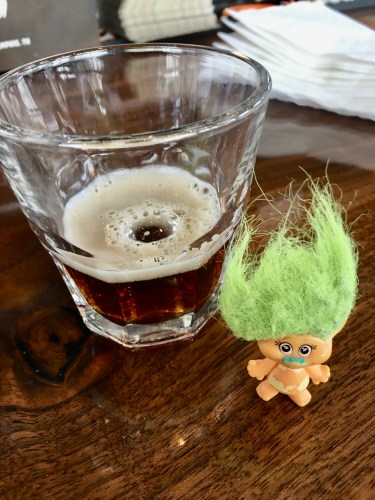 It was good, although I thought it tasted more like root beer or maybe sasparilla than it did a S’more.

Memphis Black Restaurant Week returns March 8-14. African-American owned restaurants all over the city will have 2-course lunch specials for $15 and  3-course dinners for $25 to help raise awareness of their businesses. This is a great week to discover something new. As time draws closer I will compile a list of Downtown restaurants that are participating.

Memphis Symphony Orchestra will perform Stravinsky’s tribute to a great Pontiac sports car of the 1960s through the 1990s. On February 29 and March 1, MSO will give performances of The Firebird Suite at the Cannon Center.

At this point in time I am ready to announce my pick in the March 3 Tennessee Democratic presidential primary. I will be voting for Joe Biden. He is not my ideal candidate, but this is a special election. More important than any single issue, more important than the candidate’s age, is that the Dems need to nominate someone who is appealing enough to the general public (not just their own party) to win in November and drive that fat, illiterate orange fuck out of the White House. America can’t handle four more years of this. I think Biden has the best chance to turn Pennsylvania, Michigan, and Wisconsin back to blue. I also think we need someone with experience in the executive branch to repair all the damage that Trump has done.

The U.K. election is why I can’t support Warren or Sanders. Boris Johnson is not a likable fellow in the least, and he has some scary ideas, but Labour nominated someone who was so liberal that they scared the general public even more. I fear the same will happen here if either one of those two is the Democrats’ nominee. Also, if you’re a Sanders supporter, I encourage you to look up his record in the Senate on votes concerning Russia. It’s not good.

Back to work. I may take a day or two off from going out this week to work on my data science projects and also to offset some of the money I spent this past weekend. Back tomorrow with more news.