Happy MLK Day everyone. I’ve got 30 minutes until Bardog opens, so let’s see how much news I can squeeze in. 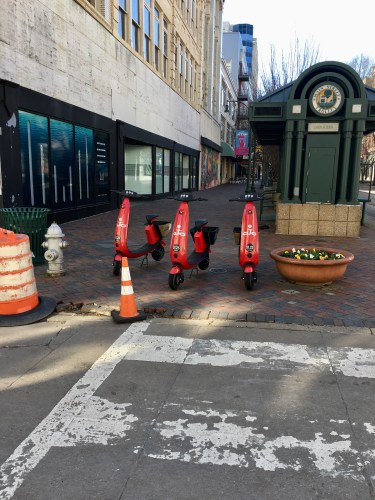 If you look closely when walking down the Main Street Mall, there are markers indicating the path a person in a wheelchair should take. But how is a person in a wheelchair supposed to get by this? The thing that really infuriates me is that I don’t think these were parked by careless riders. They appear to have been parked by an employee of the scooter company for maximum visibility at one of Downtown’s most prominent intersections… but parked with a complete lack of consideration for everyone but those who might want to pay to ride on a bright red scooter.

I watched the Kansas City Chiefs-Tennessee Titans game at the Silly Goose. General consensus was that nearly everyone in the room was for the Titans. “I’m not for the Titans so much because I live in Tennessee,” I explained. “It’s more because there’s this guy who wears a really stupid looking Kansas City hat.” About half an hour later Rahul came in… 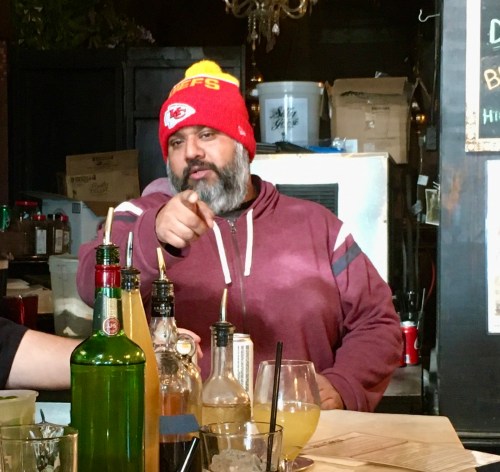 … and people were like, “Is that him?” Yes, that’s him. I guess Rahul is one of those people to whom the phrase “too many Chiefs and not enough Indians” doesn’t apply.

Indie Memphis will host a one-night-only international film screening of The Chambermaid Wednesday, January 22 at Malco Powerhouse on G.E. Patterson. The central character is Eve, a chambermaid who works long days at a hotel in Mexico City. The movie is said to be “a salute to “the invisible women caretakers who are the hard-working backbone of society.” The movie starts at 7:30 and you can purchase tickets here.

A construction worker was left hanging from a rope Friday at St. Jude after scaffolding collapsed. He was rescued without injury.

All right, time to get out. None of the remaining news is time-sensitive so I’ll push it back until tomorrow.