A big THANK YOU to one of my Facebook friends for sending me the photo below, proving that the King’s Palace Cafe Tap Room was charging nearly $14 for a Big Ass PBR on College GameDay, November 2, 2019. (Click the image to see it in a larger size) 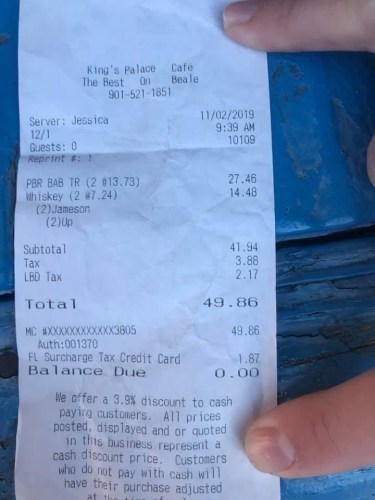 I’m not going to speculate whether they upcharged for the special event, or whether this was an every-day price. I don’t go there enough to know. Nor am I going to tell you, do or don’t go to the Tap Room. That is for you to decide. All I am going to do is point out that the Tap Room has been known to charge nearly $14 for the same amount of domestic beer you can get for $6 not far away.

Got news on a couple of service industry open positions. First of all, Cafe Keough is hiring and is willing to train. That’s a neat job because you’d be part barista and part bartender. Also, Keough does not stay open late at night so you wouldn’t be getting home at 3 AM. It’s at its busiest during morning coffee time and at lunch. Cafe Keough is located in the ground floor of the Number 10 Main apartments.

Secondly, The Nine is hiring servers. This is the Thai restaurant on Union just west of Huey’s.

I went to the Silly Goose yesterday to hang out at B-RAD’s bar, and discovered that Dylan had been experimenting with sandwiches in the wood-fired pizza oven. He brought out a sample for Perjorie T. Roll to try. 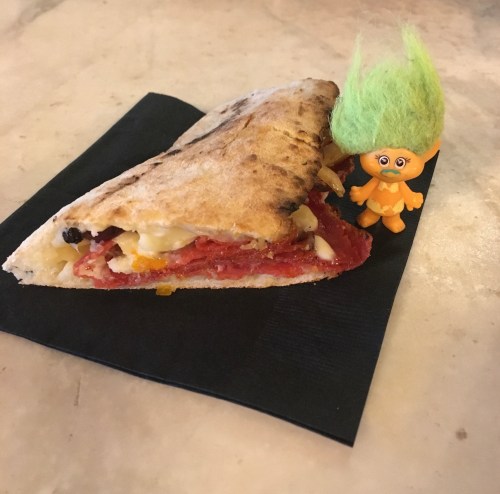 This is the “Bitch, Please,” named for Tony, one of Brad’s Sunday regulars. It has Calabrese, pepperoni, mozzarella, house pickled peppers, olives, and mayo. Damn was it good! The potential of that wood-fired oven seems practically unlimited. They plan on doing some experimentation with pasta too.

The Daily Memphian has a really good piece on the history of the Bluff Walk, now beloved by Memphians but at one point a controversial proposal.