Looking for a superb Valentine’s Day date night? Look no further than Rizzo’s by Michael Patrick. Chef has put together a special Valentine’s Day menu with a cost of $65 per person.

After you’re done with Valentine’s Day dinner, head on over to Longshot for some disco-style Friday Night Fever on the 14rh. There will be ’70s music, food specials, drink specials, a $50 bar tab for the best-dressed group, and a free night’s stay at the Arrive Hotel for the best-dressed guy or gal. Longshot is the shuffleboard bar in the Arrive, entrance just off Main on Butler Ave.

If your Valentine is the four-legged kind, bring him/her to Fido Friday at Loflin Yard on V-Day. This is a happy hour where dogs are invited, so bring your pup and enjoy 2 for 1 prices and swag for the dogs. Can’t make it on Valentine’s? No problem. This will be a weekly Friday event.

The Rusty Pieces play the Blind Bear tonight. This is the first time Jessi will perform following her hiatus, and she and her husband Weston have a whole new sound that they’re ready to share with their fans. Should be a great show.

Lil’ Jon was seen in town this week, shooting a video at various locations including the Arcade restaurant. Facebook and Twitter were full of photos. The Daily Memphian has a report.

As your number-one source of news and information about The Edge District, it’s my pleasure to tell you about an event happening at Wonder / Cowork / Create at 340B Monroe 2 to 4 tomorrow afternoon, Sunday, February 9. It will be the first in a Women Who Rock series, a conversation with Memphis musician Grace Askew. If you’re not familiar with her work, you can read all about her in this High Ground News interview.

Hair extensions have been around for a while, but now there’s a related beauty trend: nose hair extensions. Oh my God. Just don’t do it.

Wilons Woodwork Creations will be the featured vendor at Small Shop Saturday at the Ghost River taproom today from 1:30 to 6 PM. They have some cool Valentine’s Day gifts, including 6-pack holders, wine racks, cigar holders, cutting boards, and a variety of other handcrafted goods.

There’s a gala at the Puck Food Hall tonight at 6:30, put on by Merge Memphis, that benefits Clares House. Clares House is a homeless women’s facility that assists its clients with safety and stability issues, getting employment, and more. Get tickets here

River Time Market & Deli on Court Square has created another new sandwich that sounds really good, but it doesn’t have a name yet. 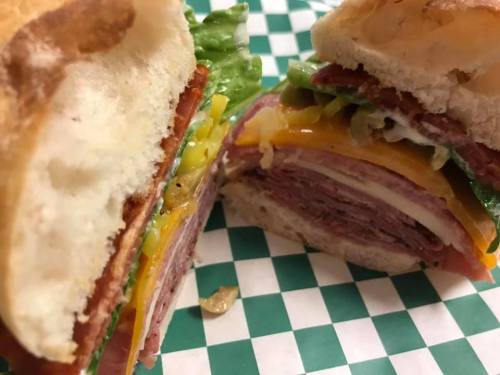 Yesterday I had people tell me, “Paul, I thought you Photoshopped that photo of Bluefin until I walked by and actually saw a Chester’s Fried Chicken serving station, just like the ones you see at gas stations, sitting on the main bar, first thing you see when you look in the window.” Yep. They really did that. However, I will point out that I have a BBQ teammate who drives trucks for a living and he says it’s really good truck stop chicken. He rates it above Popeye’s.

There will be an exhibition opening party at Art Village Gallery, S. Main at Huling, tonight from 5 to 8 PM for Out of Africa. This is the seventh year for this theme, bringing contemporary art from Africa and its Diaspora to Memphis for Black History Month. This year the exhibit features the work of Gerald Chukwuma. His creations depict scenes from Igbo Landing in St. Simons Island, Georgia, in the year 1803. The landing was the scene of a mass suicide of Igbo people who took control of their slave ship from their captors, refusing to submit to slavery in the United States.

Union Row developers have purchased the Hunt-Phelan Estate at 533 Beale. Built before the Civil War, the mansion served as General Ulysses S. Grant’s headquarters for a while. Later, Andrew Johnson, one of three presidents to be impeached, stayed there several times.

The Memphis Tigers host the University of South Florida Bulls today at 3 at FedExForum. The game will be broadcast on CBS Sports Network.

I’ve been hearing of a string of restaurant robberies in the Downtown/Midtown area (2 Downtown, 2 or possibly 3 Midtown) since the first of the year that may be related. Here’s what I’ve been told these robberies have in common:

The NBA All-Star Game will be next Sunday, February 16 on TNT at 7 PM. This year the format of the game will be quite different. Each of the first three quarters will be a mini-game unto itself, with the score reset for each quarter. The winner of each of the first three quarters will have $100,000 donated to the charity of the team captain’s choice, with LeBron supporting Chicago Scholars, and Giannis supporting After School Matters.

At the start of the fourth quarter, the scores will be reset to the combined totals of the teams’ scores for the first three quarters. The teams will then play without a game clock (but with a shot clock) until one team reaches the score of the leading team at the end of three quarters plus 24. This is a version of the Elam Ending, designed so that the teams play real basketball right up to the end, rather than spending the final minutes fouling and shooting free throws. The number 24 was chosen in memory of Kobe Bryant, who wore number 24 for the Lakers. Winning team gets $200,000 donated to their captain’s charity. In the event that one team runs the table and scoops the entire $500,000 in donations, the losing team will still get $100,000 to its captain’s charity.

The main post office for Memphis, at 555 South B.B. King, is one of the select post offices the U.S. Postal Service will keep open on Presidents Day, Monday, February 17. Hours will be 10 AM to 5 PM. Regular mail will not be delivered that day but Priority Mail will.

The XFL season starts this weekend. 411Mania has information on where and when to watch the games.

I’ll end this post with links to two interesting psychological studies. The first is a look at why people don’t return shopping carts to the proper receptacles after loading their groceries into the trunk. Turns out there are five categories defining what people do with the carts. Also, people are less likely to return the carts if there is evidence in the surroundings that people can get away with violating social norms.

The Political Compass is one of the best tests I have encountered to measure a person’s true political leaning. It is not just a liberal vs. conservative spectrum. Rather, it is a two dimensional graph, measuring liberal/conservative on one axis and libertarian/authoritarian on the other.  I took the test and was scored as a liberal libertarian: 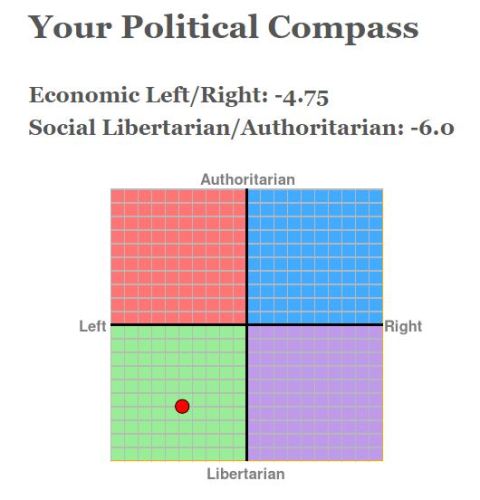 Take the test for yourself and see where you score. Then read this article that explains why those with authoritarian tendencies, represented in the upper half of the graph above, have gravitated toward the Republican party in recent years and have seen their influence as a bloc in the Republican party grow.

This post went a little long today. Time to eat some lunch then head to Bardog. Request for my Bardog friends who read my blog: I need to take it pretty easy on shots today. I have a friend’s going-away party at 5 that I absolutely cannot miss. Back tomorrow with more news.