Well, I got to Walgreens at 8:01 this morning, but none of the 50% off candy appealed to me. Mostly all of what they had left was the heart-shaped boxes of mixed candies. It seems depressing to buy one of those for myself, and besides, I don’t like half the candies in the box anyway. And let’s face it, what would happen is that Perjorie T. Roll would wait for me to go to work Monday morning, and then eat all the candy while I’m gone.

Professional Bull Riders return to FedExForum this evening. The Daily Memphian has a look at what life is like when your job is to hold on for 8 seconds.

A national TV audience will watch the Memphis Tigers fight for a top seed in the NIT as they travel to Hartford to take on UConn this afternoon at 2. You can watch the game on ESPN.

I tried another new pizza at the Silly Goose yesterday: 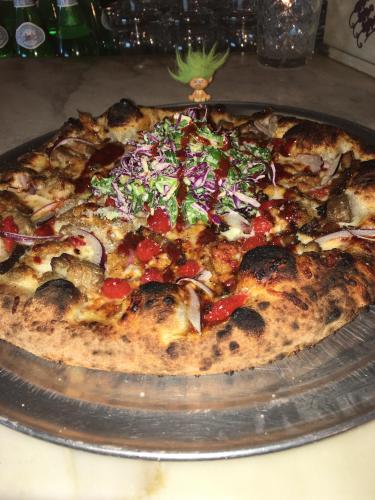 This is the Low and Slow, the Goose’s approach to a Memphis-style BBQ pie. It comes with sweet Guajillo BBQ sauce, Pontotoc pulled pork, chicken, onions, sweet drop peppers, slaw, Parmesan, and mozzarella. This is the messiest Goose pizza to eat, but the flavors come together really well. If you like hot BBQ sauce, you’ll appreciate the Guajillo sauce and the peppers. I’m having a leftover slice as I type this, and it’s almost as good cold as it is fresh out of the wood-fired oven.

I had good reason to eat a BBQ pizza yesterday… I gotta get fired up for BBQ season! We finally herded the cats and the Moody Ques are having a board meeting tomorrow afternoon. We’ll set the dues for 2020, discuss booth design and T-shirt design, decide which ancillary cooking competitions to enter, and whatever else a BBQ team talks about. Team members, expect an email Monday or Tuesday.

Anyone else Downtown having trouble with Comcast Internet being extremely slow this morning?

Memphis Made Brewing Co. hosts Beers for Beasts today at 5. Memphis Made has a reason to take the loss of millions of animals in the South Australia fires seriously – one of their bartenders, Damien Klingberg, is originally from that area. A minimum $5 donation is suggested at the door, to go toward rescue efforts for the koalas and other animals that lost their habitat. You’ll get live music by Jeff Hulett, The Switchblade Kid, Piper Down, and Solar Powered Love, and Goner Records’ DJ Zach Ives will be there as well. A portion of the amount for every pint sold will go toward the relief effort.

You remember last year when an airline passenger’s emotional support peacock was denied entry to the plane’s cabin? Well, this goes even a step farther. A man in Port St. Lucie, Florida was upset that he was not allowed to carry his life-sized emotional support cardboard cutout of Donald Trump on the plan with him.

The Downtown Neighborhood Association reports that cigar bar Robusto by Havana Mix is seeking a development loan to get an expansion that will triple the bar’s size. Wow… that’s quite good, going from Bar Rescue to an expansion in two years! Let’s hope they get it done.

The U.S. Civil Rights Trail added two Memphis locations this week: WDIA Radio and historic Beale Street. The trail consists of more than 100 locations in 15 states that were important to the Civil Rights Movement. This would be a really neat vacation to take, although one would probably have to take a month off work to have time to hit all the stops.

Many Memphians stop at Lambert’s Cafe, Home of the Throwed Rolls on their way to St. Louis. Well, bad news for Lambert’s this week: the founders’ son was arrested on sex trafficking charges.

Might want to avoid the 100 block of Peabody Place between noon and 2:30 today… vegan activists will be out.

Wow, that’s really bad news for Amy Klobuchar. If the primary is of interest to you, might want to bookmark that link.

I have not early voted yet and I still haven’t totally made up my mind. Biden, Bloomberg, Buttigieg, Warren, and Klobuchar would all make excellent presidents in my opinion; it’s just, who has the best shot of beating Trump?

Time to get out and about. I didn’t get to see The Rusty Pieces’ return to the Blind Bear last Saturday because I failed to heed the words of our BBQ team’s inspirational leader and father figure. “ALWAYS REMEMBER, PAULANER, IT’S A MARATHON, NOT A SPRINT.” The Rusty Pieces are back tonight and this time I’m going to try to make it. Back tomorrow with more news.