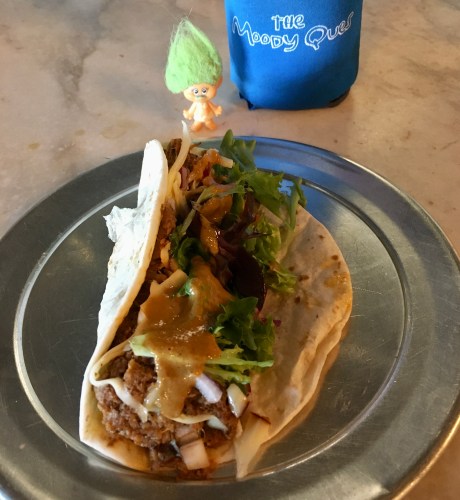 Pork with 8 spices, a fabulous sauce, onions and some green stuff. They were selling the tacos for $2.50 each. They were quite generous with the meat. This taco’s flavor was on point and I would even say that it could give Maciel’s a challenge for the title of Downtown’s best tacos. Not sure if these will become a regular menu item or will remain a special attraction.

After a couple of PBRs at the Goose, I headed to my “home away from home on the south side,” Max’s Sports Bar, which opened early at 1 yesterday for the Tigers-UConn game. On the way down there I noticed that progress is finally being made on One Beale: 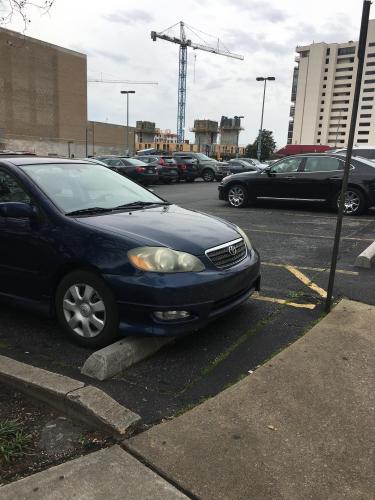 Nice to see that construction is actually happening on this project that has been talked about for, what, 15 years now?

While at Max’s, I got a tip on something fun to do in Memphis from Bjarni. He said that Hernando’s Hideaway, a dive bar near Graceland, has Chickenshit Bingo every Sunday. What that means is, they put ping-pong balls with bingo numbers in a big cage, and a real, live chicken selects the balls. Downtown group, we need to go in on a Lyft or Uber and check this out. Sounds like fun!

I had to leave Max’s at halftime for a Moody Ques planning meeting up the street. Probably a good thing that I left, because I would not have enjoyed seeing the Tigers lose to a mediocre UConn team. Damn, we’re not even going to make the NIT, are we?

Moody Ques team members, you’ll get an email today or tomorrow, but here’s a quick summary:

Okay. I have a couple of questions I hope my readership can help with. The application deadline for BBQ teams was last Friday. So my questions are:

First of all, did Weekend at Porky’s submit an application?

Word on the street is they were considering coming back this year. Weekend at Porky’s is the team that entered BBQ Fest 2015, threw a big party, and didn’t even try to turn in food. Later that year, they competed in Best Memphis Burger Fest, where they only turned in one of the three required burgers. The one they turned in was a veggie patty made by the mother of one of the team members, which they then cooked on a George Foreman Grill. I wonder if enough time has passed that Memphis in May will have forgotten who they are and let them back in for 2020. We like having Weekend at Porky’s in the competition because it practically guarantees we won’t finish in last place.

Then again, they may be too busy with their podcast to have time for BBQ. As much as I hate to admit it, their podcast is surprisingly good.

The last I heard (as of approximately February 6), they were undecided whether or not they were going to hand an application in. I have heard various things over the past 8 months – that 2019 was their last year, that they’re going to make one more go of it as a shoulder team in 2020, that they’re going to change their name and drop back down to Patio Porker division, where they enjoyed success (and trophies). Not sure what to believe. Part of the reason I went down to Max’s yesterday was to ask them, but they weren’t around.

Soccer supporters’ group Bluff City Mafia has announced the dates and locations for their preseason tour:

Come join us for the Bluff City Mafia preseason tour!!

The Broom Closet on South Main will have a Hoodoo Manifestation Workshop on Sunday, March 1. The class is for adults only and there is a $15 “energy exchange.”

All right. Time to start knocking items off my to-do list. Back tomorrow with more news.