Reminder to those of you in controlled-access buildings: The coronavirus outbreak is causing us to rely on deliveries more than normal. If you have your phone set up to send calls from numbers not in your contacts directly to voice mail, make sure your building’s call box numbers are in your contacts. Also, each call box may have a different number, so make sure you get them all if your building has multiple entry points.

Robinson Smokehouse has announced weekend specials, to be picked up at the Green Beetle on Saturday. A local says the pulled chicken is out of this world. 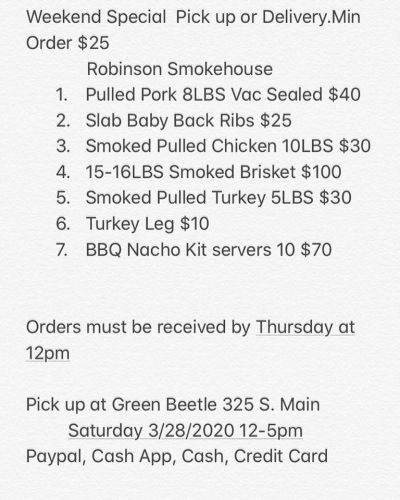 I’ve been told that the PBR Hard Coffee is available in Memphis, and that the Kroger on Trinity in Cordova has it. The friend who told me that commented that the hard coffee tastes more like the Starbucks in bottles found at gas stations than a coffee stout like Wiseacre Gotta Get Up to Get Down. I would agree.

The Orpheum announced its 2020-2021 Broadway schedule Monday. It includes

We love our neighbors and the community, and we know many are struggling right now. We want to help. For those recently laid off or furloughed, please find all of the details here: https://t.co/MHlJEtXuds pic.twitter.com/gHtSOJDPwo

Lori Turner-Wilson of Downtown agency RedRover is rolling out a series of advice on marketing and branding in the coronavirus economy. Volume 1 of the series discusses playing offense vs. defense.

From the MBJ: Meet Derk Meitzler, whose next project is Paramount, a restaurant at 262 S. Front in the old Bluff City Law office space.

Ditty TV has organized a virtual event schedule so you have ways of keeping yourself entertained while isolated.

WWE is making the WWE Network free for a limited time so wrestling fans have a way to entertain themselves while isolating. There you can find every WWE, WCW, and ECW pay-per-view ever made, as well as original content and classic wrestling TV shows from the 1970s to the 1990s.

The City of Memphis has launched its COVID-19 website.

MPD has closed all nine of its precincts to the public except for emergencies, including the North Main Precinct in the MATA bus terminal.

During this uncertain time, we are going to keep the music playing. FOR YOU. The health and well-being of our programmers is our top priority so all shows aired will be prerecorded instead of hosted live by volunteers. Tune in to WEVL FM 89.9 or stream on https://t.co/0cRsuklzjy.

Gould’s has closed all its salon/spa locations, including the one at Main and Union. Hair salons are not considered businesses that provide essential services under Mayor Strickland’s Safer At Home executive order.

I have to admit this thought had previously crossed my mind:

People don’t even put the grocery cart back after grocery shopping, but we think that they are just gonna stay in the house for the safety of others?

Lol this country has the most selfish people on earth.

I previously posted today about the Arcade’s lunch specials, Wiseacre delivering beer, and homemade dinners of beef cannelloni, Italian spinach garlic bread, and chocolate chip pie by my friend MK. Just about 10 minutes after that last post, MK messaged me on Facebook with the info about her dinners.

“Already saw it and blogged it

I started to type, “Naw, that’s not necessary,” but then I stopped and thought, what do I want to be eating Friday? Homemade cannelloni or a heated-up can of Beanee Weenee from Family Dollar? “Sure,” I messaged back. Can’t wait to try it!

I learned something this week… Perjorie T. Roll is not the only troll who perfers foods that are the same color as her hair. Mendatius got really excited about these Spicy Nacho Doritos: 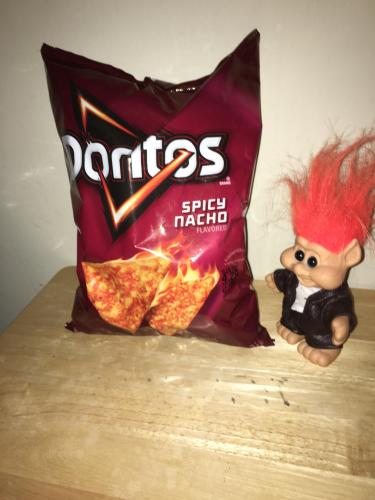 Well, this post is getting pretty long, so I’ll go ahead and hit Publish and start a new one. Back later today or tomorrow with more news.