After almost a year, construction barriers have been removed from 18 South Main! 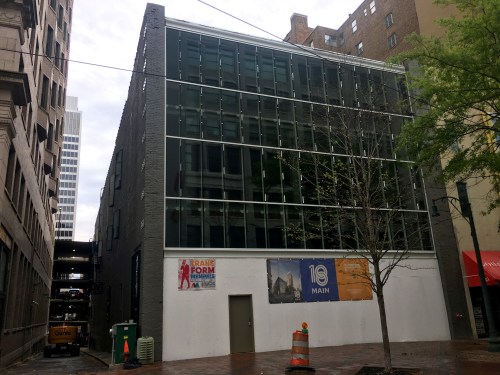 The former Murray’s/Jerry’s building looks different – and better. So nice to have that sidewalk unblocked. I’m sure the fine folks at The Peanut Shoppe are happy that the barriers are no longer blocking visibility.

Today would have been opening day for the Memphis Farmers Market, but it will be postponed by at least 5 weeks. In the meantime, the Market asks you to support its vendors directly.

Small businesses in the Medical Center District, which includes Downtown neighborhoods Uptown, The Pinch, Victorian Village, and The Edge, can now apply for up to $15,000 in grant money to help get through COVID-19’s economic effects. Food and beverage businesses can apply, as well as “third place” (places people congregate regularly that are not home or work) businesses. More info/application

I’m definitely not a karaoke fan, but if you are, here you go. (This was tweeted yesterday, so by “tomorrow evening” they mean tonight)

Tomorrow evening at 8PM we’ll be going LIVE on Instagram doing one of our favorite and normal things – karaoke! We have a few special guests lined up, and it’s bound to be silly if nothing else. We’ve been… https://t.co/UQ2j2tzaZt

Terri Clark, Lauren Aliana and Ashley McBride perform live tonight at the Grand Ole Opry at 7 PM. You can catch the performance on TV on Circle, on Facebook, or YouTube.

From The Onion: Southern governors argue that COVID-19 is a good Christian virus that wouldn’t dare spread during church

ArtsMemphis has created a fund to help artists who had work that was scheduled or contracted, but which was lost or canceled due to the coronavirus.

Embedded at the request of Perjorie T. Roll:

For a limited time you can watch HBO shows for free. Shows include The Wire, The Sopranos, Six Feet Under, Silicon Valley, Veep, and Ballers. Movies include Isn’t It Romantic?, Crazy, Stupid, Love, The LEGO Movie 2: The Second Part, and Pokemon Detective Pikachu.

The exact opposite of leadership:

Trump says he won’t wear a face mask, but you should https://t.co/OE4iSYNZmQ

From WMC Action News 5 on the Safer At Home order:

You can also report groups/gatherings by calling one of these numbers — anything you believe goes against state and local authorities’ safer-at-home orders. https://t.co/OAH0NnuwaI

That’s the news for this morning. I may try to mess around with my schedule this week and sleep 6 times in 7 days, so the timing of my posts may be affected. Back later today or tomorrow with more news.