Yesterday was a sad day to be on social media here in Downtown Memphis. People were changing their cover photo and profile pic on Facebook to images of Max’s Sports Bar and posting “greatest hits” photo and video galleries, to commemorate what may very well have been the limited service restaurant’s final day of operation after nearly 13 years.

When most businesses close, there is a “but.” That is to say, if you weren’t familiar with the situation, you might wonder if people were saying stuff like

No. None of that. The only thing Max was guilty of was creating a place where people could enjoy a tasty adult beverage, get to know their neighbors, and cheer for their favorite teams. Well, that and being a limited service restaurant, but during the time Max’s was back open, COVID-19 protocols were followed much more strictly than even most full-service restaurants.

It’s not for sure that Max’s is gone for good, but think about its business model. Max’s was open 365 days a year, but there were about 30 to 35 of those days that really mattered. Specifically

On those days, Max could count on having an ass in every seat from 30 minutes after open until the final whistle blew on the last game of the night. He could also count on there being a crowd 2-3 deep at the bar waiting to order drinks, and a packed patio out back. If you needed to get up and use the restroom, it took you 10 minutes to navigate the 30 feet from the farthest bar stool away because there were so many people. Such was football season at Max’s.

For that to happen, for Max to be able to make his money on the days that matter the most, we would need to get into and past Phase 3 and back to 100% capacity, no social distancing required, in four weeks. That is unlikely to happen. Even if we call the beginning of football season the first day of SEC conference play, now scheduled for September 26, we almost certainly aren’t gonna get there.

For those of you who have no medical background at all but nevertheless get on social media every day and preach that we aren’t doing enough in the way of COVID-19 restrictions, are you happy now? Is the CLOSED sign at Max’s a victory for you? Are you basking in the glory of your #PeopleBeforeProfit hashtag today?

On to the news… it’s National Coloring Book Day, so I will remind you that you can support local journalism and local artists by ordering the Memphis Flyer Coloring Book.

You can watch the final round of the WGC St. Jude Invitational today on WREG channel 3 locally. Brendon Todd, at 12 under, holds a one-stroke lead going into the day.

The Grizzlies play the San Antonio Spurs today at 3 PM in the second of eight seeding games. You can catch the action on Fox Sports Southeast.

Other NBA games of interest to the Grizzlies today:

You can get a free mask in Fourth Bluff Park this afternoon from 4 to 7, as well as free hand sanitizer, free school supplies and a free snow cone courtesy of the city, Memphis River Parks Partnership, and One Memphis One Vision.

I was at Slider Inn Downtown yesterday between about 12:30 and 2:30, and discovered that the full menu is back! I ordered the shrimp po’boy sliders. 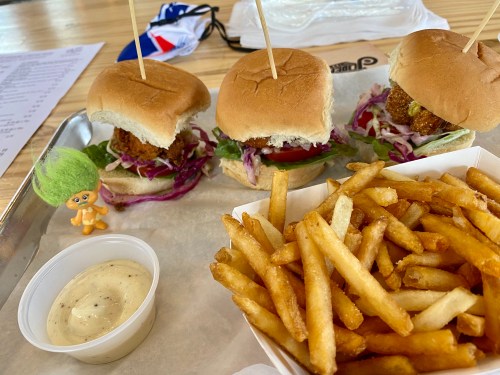 Cornmeal batter was excellent, as was the slaw that came on the sliders. I would definitely get them again, although it looks like I will not be at Slider Inn next Saturday. I’ll leave it as an exercise to the reader to figure out where I might be instead.

There’s been a suggestion on Facebook that the e-scooters be disabled at a certain time on Friday and Saturday night so teenagers can’t ride around Downtown and weave in and out of the drag racing traffic and come close to crashing into people. I would totally support that. 9 PM?

That’s it for now. I have absolutely nothing to do today, so there could be another post. Otherwise I will be back tomorrow.