Headline story in this morning’s Daily Memphian: Most bars remain closed after two months; a few have reopened with a new license

The Bardog Beer Dinner series is BACK with half the capacity & all the fun! We’re hyped to highlight some new brews from our friends at Grind City Brewing Company, paired with a special menu and a some surprises along the way. 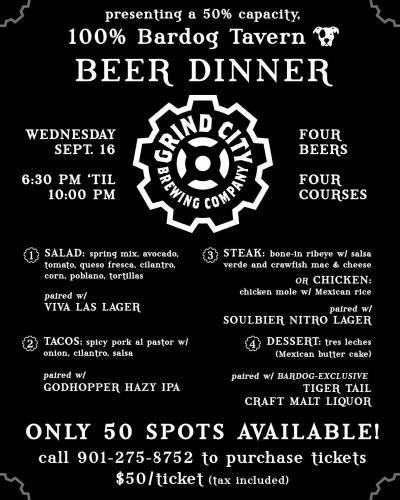 GoFundMe: Save the South Main stray dog “Stan.” Stan is a female. She has been hanging out in the area of West Carolina Avenue for a few months and was trapped last week. The money is needed for vet bills to treat her for infections, get her fully vaccinated, and get her spayed so she’ll be ready for a forever home.

If you only check my blog on weekdays, you don’t want to miss this video from my Saturday post: Brawl Leads to Shooting in Downtown Memphis. This was not the shooting that was reported at MLK and Orleans over this weekend; this appears to be at the intersection of Second and Peabody Place. Where were the police? Pretty sure there’s a Blue CRUSH camera on that block.

I’ve had the song “Train Kept A’ Rollin'” stuck in my head all weekend, so you get a video.

This is the 1968 version of The Yardbirds, shortly before they broke up. Jimmy Page shows early flashes of the brilliance he would later display in Led Zeppelin.

Ever wanted to be a volunteer gardener at Elmwood Cemetery? There’s an introductory webinar tonight.

I plan on going out a lot less this week. Probably Wednesday night at Blind Bear and Saturday at Bardog will be it. All these stupid health department regulations at full-service restaurants mean half the fun at twice the cost. I’ll be better off staying home and working on my writing.

If there’s a COVID-19 task force press conference today, I may be back this afternoon with a recap. Otherwise, I’ll be back tomorrow with more news.