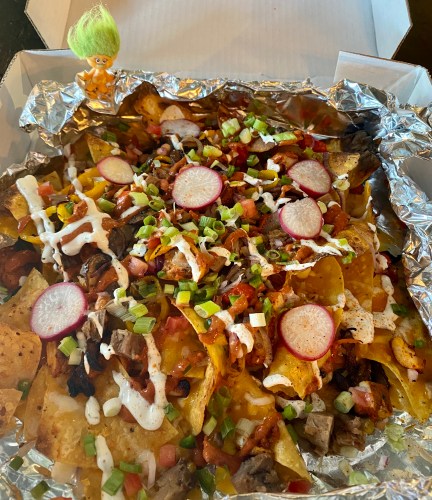 Looks yummy, doesn’t it? I stopped by the Silly Goose about 2:30 yesterday. Since I’ve been working on my writing, I’ve cut my bar visits way back, and it was only my second time at the Goose since it reopened for dine-in. They’ve expanded their indoor seating a little – you can’t sit at the bar, but you can sit at a table in the bar area. So they’ve set up four 3-top tables adjacent to the bar.

Dylan the head pizza genius was not working that day, but he had stopped by to check on things. When he saw me, he said, “Paul! Let me make you something!” He checked to make sure I like mushrooms (I do) and he went back in the kitchen. A short time later he brought out the nachos pictured above.

They were covered in scallions (which made Perjorie T. Roll happy because they’re the same color as her hair), radishes, the aforementioned mushrooms, peppers, plenty of melty, gooey cheese, and sour cream. The real stars of this plate (or actually, pizza box), however, were the pieces of chicken and pork that topped this masterpiece of cheesy goodness. They came from local wholesaler Black Sheep Meats and the flavor was out of this world, like nothing I had ever tasted on nachos before. Such a perfect counterpoint to the other ingredients. Put it this way, I could have brought those nachos into BBQ Fest and told people my team the Moody Ques made them, and no one would have questioned me.

Looking for something to do this afternoon or evening? Check out this announcement from the Goose’s sibling restaurant, Pontotoc Lounge:

BREAKING NEWS! Pontotoc has just found the cure for… your Monday Blues! We are now open on Monday’s and Tuesday’s for the first time since before the “C word” occurred. We have all the beverages, yummy food, and great energy to get your week started on the right foot! See you soon!

Today just seems like an ideal day to raise a craft cocktail as you say the “F word” to the “C word.” Just make sure to order a food item with your cocktail and be done eating and drinking in no more than two hours, so (according to the health department) you won’t catch COVID.

The Memphis-Houston football game has been rescheduled for December 5 at the Liberty Bowl.

Paul Staples, who is accused of pointing a gun at protesters outside his home in the 400 block of South Main, appeared in court yesterday. He was told to hire an attorney and will have another court date next month.

Memphis Tourism is spearheading an Eat Live Local rally for restaurants. Restaurants need our support more than ever in the face of COVID and regulations. There will be gift card giveaways, neighborhood restaurant spotlights, blog posts, videos, billboards, and more.

Trump and Biden face off in the first debate tonight. Here’s a presidential debate drinking game. For those who don’t drink, there’s also a bingo card. The debate will be on NBC, ABC, CBS, FOX, and PBS.

There were 4686 COVID tests reported yesterday and only 164 new cases reported yesterday, for a positivity rate of only 3.5%. ICU bed usage is down to 79% and the number of COVID patients in them remains below 60. Can we have our bar stools back now?

From POLITICO: The 10 biggest whoppers you can expect to hear at tonight’s debate. What? Are they suggesting politicians LIE to us?

Today’s COVID-19 task force press conference could be interesting, since testing has expanded and positivity rate has been low in recent days. I will try to tune in and will be back with a recap this afternoon if there’s anything newsworthy.