I want to start off today’s post by asking a question that is so, so, SO Memphis, but you’ll never see it asked in a commercial blog like I Love Memphis or Choose901.

What’s the longest street in Memphis that is NEVER not in the hood? Meaning, every single block of it is sketchy?

Let’s throw in a kicker that the street must operate under the same name at all points. So Stage/Delano/James/Scenic Hwy/Stage-James/James/Stage doesn’t count, nor does Frayser Blvd/Raleigh-Frayser/Yale.

This question came to mind yesterday afternoon. My friend Randy and I were hanging out at Bardog as per usual for Saturday brunch. We were coming up on the end of the incredibly stupid two-hour window for service dictated by the health directive, so we had to figure out our next move. “Why don’t we check out Grind City Brewing?” I suggested.

I showed Randy the way there. “The flashing red light is Chelsea,” I told him as we drove north on Second. “Once we pass that, we’re looking for Waterworks Drive about five blocks away, on the left.”

That made me think: Is there a street longer than Chelsea that is 100% in the hood?

(I’m probably going to get nastygrams from real estate agents trying to sell properties in Uptown, but I don’t care. They can come over and listen to the police scanner some weekend night.)

Lamar? Runs through sort of a nice neighborhood – the Annesdale Historic District – between Bellevue and Willett. Yes, there are some skeevy hotels, but if you have hipsters looking to buy houses in the neighborhood because they have hardwood floors and “character,” I think that disqualifies it.

Winchester? It’s hood for a long time, but when you get out by FedEx HQ it turns into a sort-of nice part of town.

Shelby Drive? Hmmm, never driven the entire length of it. I’ll have to get on Google StreetView and check it out, but I suspect it loses its hood distinction if you go far enough east.

Anyway… back to our trip to Grind City Brewery. It was a bit of a drive, but man, was it ever worth it. The place is spacious and beautiful. Best brewery taproom in Memphis by a mile (that I’ve been to; note that I haven’t been to Wiseacre 2 yet). 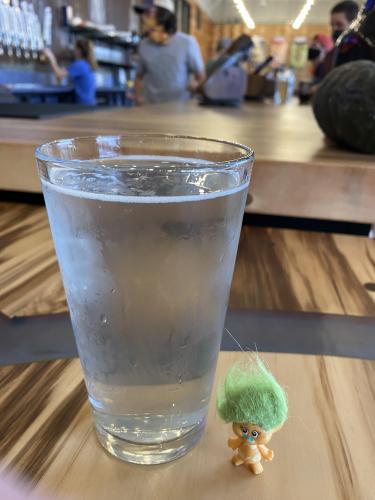 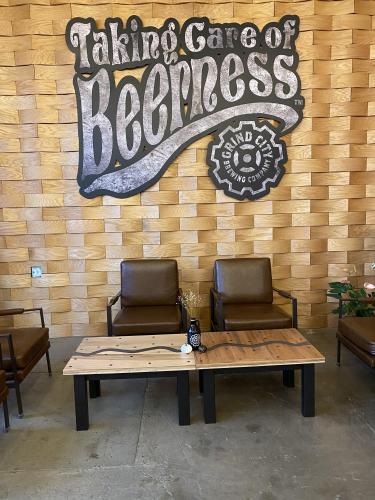 That’s a cherry hard cider Perjorie T. Roll is drinking. They had a citrus hard cider too along with about 15 different beers. I tried a lager with a lime as well (didn’t get a pic) and it was quite tasty.

What a gorgeous space! There were easily 150 people there, yet there was enough room for everyone to properly social distance. They had vendors on hand and Randy and I ordered a pizza and a quesadilla. Plenty of room for food trucks to set up out there.

I have to admit I was kind of surprised that Randy and I did not know a soul there. It was mostly a younger crowd, although I have seen photos of people from the corner table at Max’s Sports Bar hanging out at Grind City, so the geriatrics like the brewery as well.

I heard plenty of people griping about the new regulations that go into effect at midnight: At restaurants, bars, and taprooms you can only sit with people from your household, and you must keep your mask on even at the table, only pulling it down to take a bite of food or a sip of your beverage. To the people doing the griping, yes, the new regulations are unreasonable, untenable, and downright stupid, but look for the opportunity in them. There would not be names like Al Capone or Lucky Luciano in the history books had an unreasonable, untenable, and downright stupid regulation called Prohibition not existed 100 years ago. Channel your inner Capone. Channel your inner Lucky. Be the Meyer Lansky of your neighborhood. The Bugsy Siegel.

Here’s a link to James Aycock’s COVID week in review for November 21. Always a good read if you’re into data analysis.

WREG interviewed Halsey from Pontotoc Lounge/Silly Goose about the stupid new regulation that diners in restaurants wear masks between bites and sips. I guess restaurant employees are expected to be school lunchroom monitors now. Pull that mask up or I’ll send a Behavior Document home for mommy to sign!

From USA TODAY: How we celebrated Thanksgiving 1918 during the Spanish Flu pandemic

The Memphis Tigers rolled to a 56-14 win over Stephen F. Austin University yesterday.

Good news for Penny Hardaway and the Memphis Tigers basketball team: Center Moussa Cisse has been cleared for eligibility. Cisse was one of the top recruits in the class of 2020.

There’s a Fun Cow Painting Class in Millington this afternoon if you’re looking for something to do with your Sunday. I think they mean you paint a picture of a cow, rather than actually brushing paint onto a real, live cow. But it’s Millington so you never know.

That’s all for now. I could go out to Sunday brunch, but most likely I’ll stay home so I can value-signal all over Facebook that #IDidTheRightThing. I do need to get out to Walgreens because I’m out of sweets at home and that is clearly not acceptable. I hope they put the Christmas cookie flavored Blue Bell ice cream on sale this week. Back tomorrow with more news.