Well, yesterday was a newsy day. Let’s start off with a photo. 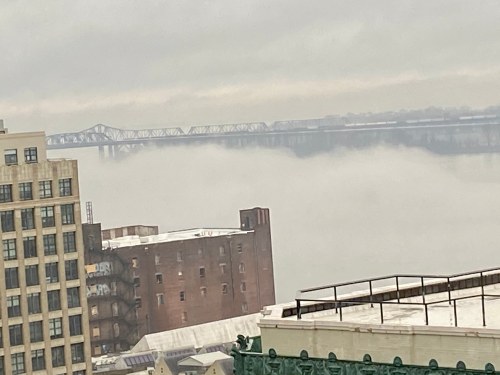 The river looked like a witch’s cauldron around 4 yesterday afternoon. I asked @memphisweather1 whether there was any particular name for clouds like these. He said I was simply viewing fog from the top down.

Let’s get to the great news first: Earnestine & Hazel’s has a new owner. That owner is Downtown Restaurant Corp., the partnership that owns The Vault and soon-to-open The Paramount, with Chef Derk Meitzler as the face of the organization. The dive bar will remain as we know it, with Soul Burgers downstairs, Nate’s bar upstairs, and Meitzler creating a menu similar to the old On Teur restaurant for The 5 Spot.

So relieved… I was worried a particular group of South Main people, a group known for bad ideas, would try to pool their money and purchase the place. Good to see people with proven track records running that type of business taking over.

Yesterday was one of those days when I mumbled “Daaaaamn” over and over as I updated the news. Things just kept looking worse and worse for the Health Department

Coverage of the first half of yesterday’s events here.

Then it was announced the FBI would investigate what happened with the SCHD, since theft of COVID vaccine is a federal crime.

Then Gov. Lee came to the Pipkin Building site and gave a news conference. He gave a political answer when asked if he thought Dr. Haushalter should resign, but it was an answer that was certainly much closer to “yes” than “no.”

By 2 PM the writing was on the wall for Dr. H. Around 3:30 Mayor Harris, addressing the County Commission, reported Haushalter had resigned – but not effective immediately. She will remain in office until March 15 and on the payroll through March 31 for a transition period.

Right now, Shelby County is at least an embarrassment of statewide proportions – Gov. Lee pointed out that 94 of 95 county health departments were distributing vaccines properly. I wouldn’t be surprised if this makes the national news.

So now we’re going to have a new health department director. It’s going to be kinda like the third season of The Real World where they kicked Puck out of the house and then Jo joined the cast.

The Memphis Tigers’ home game against Houston on March 7 is now a road game. The reason why is that the Memphis program’s COVID issues were responsible for the cancellation of the road game at Houston earlier this season. So now all three of Memphis’ remaining games are road games as the team tries to impress the NCAA tournament seeding committee.

Has February in Memphis been a shitshow or what?

Available for the first time in cans: Red Handed by Memphis Made, a 5.5% altbier.

From the CA: 5 things to know about the new Craft Axe Throwing location out in The Edge.

Tonight is Open that Bottle Night.

Temps will rise into the mid 60s today and stay there overnight. Shorts weather! Of course, I’ll bring a jacket since Bardog keeps its ceiling fans blowing. Back tomorrow with more news.