I rarely go three days without posting, and it prompted a few readers to send “you ok?” emails. Yes, totally. I’ve just been out in the world, living life and loving life.

I had a fantastic birthday on Thursday. I knew it was going to be a long day, so I needed to get a good meal in me as a base. I walked over to the food truck rodeo in Court Square. 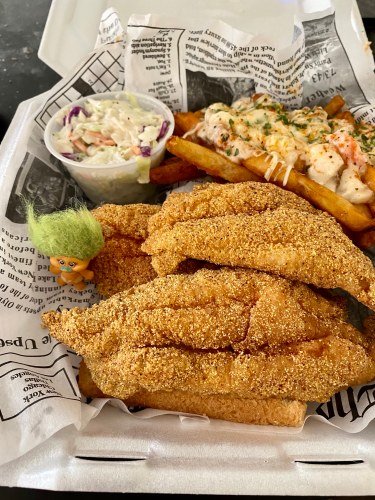 Fried fish from Mr. Frazier’s Fish Fry sounded like the perfect choice to soak up the shots that I knew were coming. Those are crabby fries in the upper right, fries covered in lump crabmeat in two kinds of cheeses.

After lunch it was time to get the day started. I led off at the Silly Goose. 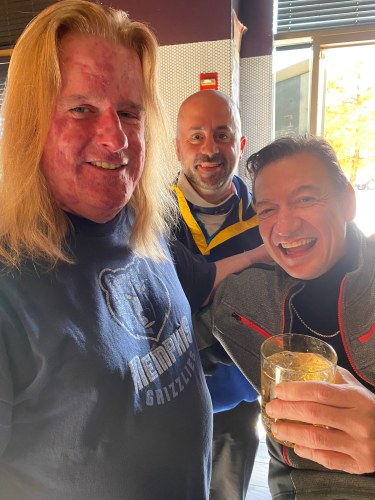 Nate (center in photo above) has a doppelganger who was walking around outside the Goose on his phone. We need to get a photo of them together. I think he works somewhere nearby. 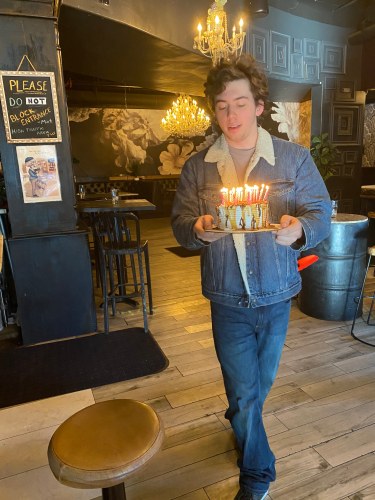 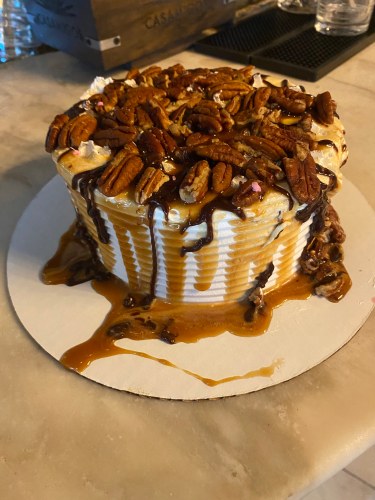 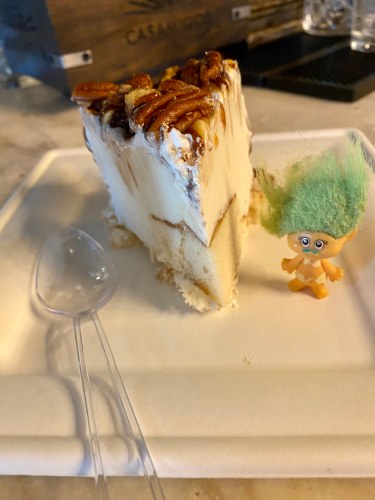 It was a turtle ice cream cake. I’m not sure where it came from (I think possibly Margie’s 901) but I will ask and let you know.

I told them I was limiting myself to one shot between noon and 8. Of course, that plan went completely out the window within 45 minutes of getting there. By the fifth or so shot I was looking a bit rough: 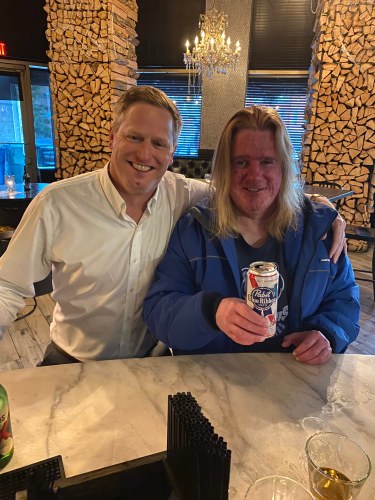 We weren’t done, though. From there, it was time for a quick trip around the corner to the Blind Bear. 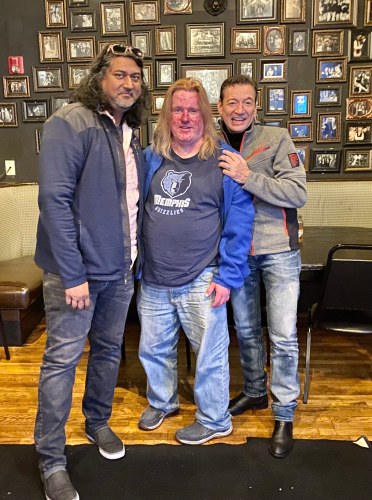 (Dammit – got one more that is a GREAT group pic of us at the bar at Blind Bear, but WordPress is giving me an HTTP error when I try to upload.)

Thanks to everyone who celebrated with me and/or wished me a happy birthday. I’ll repeat what I said on Facebook – To know that I am loved by so many amazing people is the best birthday present I could ever ask for.

Got a couple more pics too: 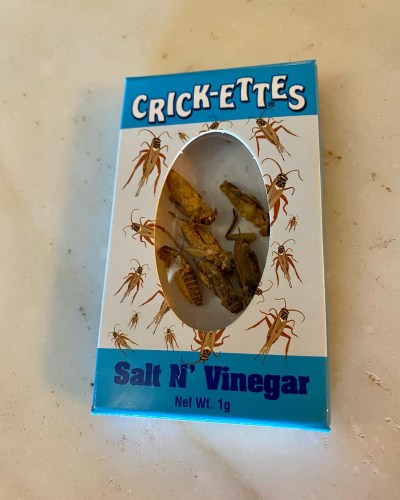 Crickets! This was our Friday adventure at the Goose. There’s a candy store on Beale Street between Miss Polly’s Cafe and the King’s Palace patio. They sell packs of edible crickets there. Someone brought them back and all of us (except one) ate a cricket. Even Jessica, the bartender, ate one. I have pictures of that but I’m not allowed to post them.

A few people commented, “Gross,” but they’re really not. The reason I wouldn’t pick up a cricket off the street and eat it is that it could have all kinds of bacteria and diseases. Commercially-sold food crickets have been sanitized, though. They’re as safe to eat as a Dorito. They’re an excellent source of protein and in some parts of the world, they are delicacies.

Here’s a recipe for cricket tacos that is said to be popular in Mexico. I have Mexican readers – do you eat these?

Next topic: Have you ever gone to a bar and the music is turned too loud? Or turned so low that you can barely even hear it? Well, there’s an app that you can install on your phone to measure how loud it is.

I got the Decibel Meter app for my iPhone on Saturday. Decibels are a measure of loudness. Here’s a chart for decibel levels of common sounds.

I started off by establishing a baseline. I set Decibel Meter on my kitchen counter, a few feet away from a humming refrigerator in an otherwise quiet apartment. It measured 47-51 db.

Then I took the app to Bardog. There had been a request to turn the music up and it was loud, but just slightly. The app measured 77-91 db with an average in the low 80s.

I turned it on once again as one song finished playing and another had yet to start – so I was capturing the loudness of only the ambient conversation in the two-thirds-full bar, without any music. It measured 75-81 db, not much lower than when the music had been playing. That surprised me at first, but thinking about it more, you want the music to be only slightly louder than the conversation around you, so you can talk to the person next to you without going “Huh???” over and over again.

I suspect the sweet spot is the low 80s, but I need to do a little more research. When the bar is packed, I would bet the ambient conversation noise alone would be in the mid 80s, so readings inching up to 90 and above would become more appropriate.

I have yet to use the meter in a bar where the music is playing WAY TOO LOUD, so I will have to come back with an update on that measure.

Anyway, just wanted to inform you that this thing exists. If you’re a bartender who constantly gets “the music’s not loud enough” complaints, this is a tool that would allow you to establish a definitive baseline for “loud enough.”

Word on Nextdoor is that thieves are stealing license plates in Uptown. Might want to bolt yours down with anti-theft bolts if you live in that area.

Starting November 24, you will no longer have to show proof of vaccination or recent negative COVID test to attend Grizzlies games. The Grizzlies are on the road tonight to face Utah at 8:00. They will be back home Wednesday to host Toronto.

That’s the news for now. Thanksgiving is a slow news week, so I’ll be back when there’s stuff to report.