Downtowners woke up to some very sad news when they checked social media yesterday morning,

Rest in peace Connor and Brian. Your smiles, your talent for making mischief, and your huge personalities will be missed.

Connor was a general manager for Tandem Restaurant Partners. Brian bartended primarily at Zinnie’s, sometimes picking up shifts at other locations like Ben-Yay’s and Sugar Grits. They were apparently killed in a single-car crash early Saturday morning near I-240 and Chelsea.

I can’t believe they will never again walk through the door while I’m sitting at the bar at Silly Goose or Blind Bear. I’ll be thinking of you as I root for the Hogs this fall, Connor. Brian even got me to root for the Atlanta Braves one time.

News came in of a couple of celebrity passings Sunday as well. Nichelle Nichols, who played Lt. Uhura in the original Star Trek series, has died at age 89. Interesting fact: Nichols was not going to return for the show’s second season. In a chance meeting with Dr. Martin Luther King, Jr., she mentioned that to him. He was a big fan of the show and talked her into coming back.

Basketball lost one of its all-time legends this weekend as Bill Russell passed away at 88. The Boston Celtics center was an 11-time NBA champion and the first Black head coach in the league. He was also an Olympic gold medalist in basketball (Melbourne, 1956) and one of only two NBA players to grab 50+ rebounds in a single game.

Better run to Walgreens and stock up now: Hershey warns of a candy shortage this Halloween

ALSAC St. Jude YOU will meet at the Renasant Convention Center toward the end of this week. This organization encourages college students to embrace their individuality while “Leading Together for St. Jude.”

War on the Catwalk comes to the Orpheum this Sunday. Drag queens from around the world will perform on stage. Tickets start at $33 and there’s a $203 VIP ticket that includes a meet & greet and autograph session with the queens.

I wonder if the queens who perform a couple of blocks away at Atomic Rose for Sunday brunch will walk over to the Orpheum and be all like, “You’re on my turf, bitch”? Now that would be a war on the catwalk I’d like to see!

Reels on the River: Denzel & Chill happens at Fourth Bluff Park Saturday night at 8. This is the first of a 4-week movie series featuring titles

Lawn chairs and blankets will be welcomed and food trucks will be on site. Please note that tickets need to be purchased in advance and that three of the four movies in the series are rated R.

The Memphis Chicken & Beer Festival happens this Saturday at the Liberty Bowl. Tickets are $40+tax and include a souvenir glass and beverage sampling. Chicken vendors (Abner’s, Gus’s, That Chicken Man, Sauced by Will Smith, Smurfey’s Smokehouse) will sell $2-$5 snack-sized portions of their food. Proceeds will benefit Merge Memphis, a nonprofit which helps underserved women live in dignity in peaceful surroundings.

There will be an inflatable archery hover ball game this Saturday at Bass Pro at the Pyramid. I have no idea what that means, but it sounds fun. Perhaps it’s similar to Quidditch?

The Genre Memphis at 200 Poplar is teaming up with Yoga Kickback for a play day this Saturday from 10 AM to 1 PM. Tickets ($35 in advance, $45 at the door) get you a 45-minute yoga class, one complimentary drink, access to a Memphis charcuterie board, and a DJ. If you want to keep partying, a cash bar will be available. YOGA!

Bardog has several different sauces in bottles that you can put on your food. I discovered a new one this past Saturday: 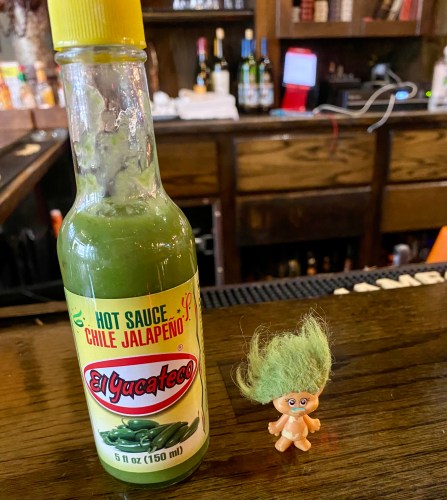 This sauce has the flavor and heat of jalapeno peppers, yet it’s creamy enough to take the edge off. I had it on calamari but it’d be good on fries and chicken tenders too. Plus, my troll liked it because it’s the same color as her hair. My new favorite hot sauce at Bardog.

My legs are starting to feel better, and I’m going to attempt to return to my normal routine today. I haven’t been to two of my favorite spots in 12 days! I have missed them. Back tomorrow with more news.