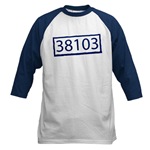 In past years many of you have seen me walking around in a 38103 T-shirt. 38103, of course, is the Downtown Memphis zip code, so it’s a way to represent downtown. A lot of people have asked me where I got the shirt – my friend Ryan made and sold them, but they’ve been unavailable for a while.

Well, they’re now available again. Ryan has created a 38103 CafePress store and is now selling the shirts from there. He has several varieties of men’s and women’s shirts available, as well as coffee mugs. Unfortunately there’s still no 38103 tube top, which is something I’ve been urging Ryan to create for a while.

If you’re proud of Downtown and want to show it, go check out the store and buy a shirt or a mug.