There’s now a sign in the window of 14 S. Second, next door to Elliott’s Burgers, that says, “Coming soon!  Paula Raiford’s Disco.” 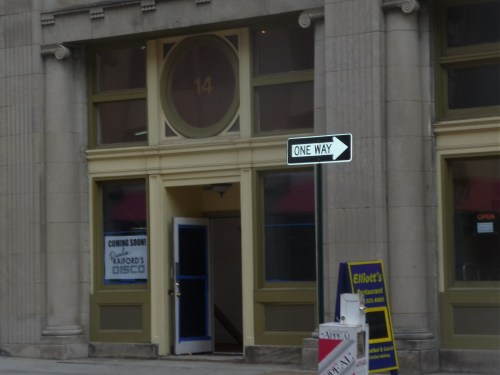 Paula is Robert Raiford’s daughter, who served quarts of beer at the old location.  She was known for having a very “hands-on” style there.  Great to see her getting her own spot.  And, once again, it’s a block from my front door, JACKPOT!!!!!

I’ve heard that although it will be Paula’s place, “Hollywood” himself will be the DJ there.  I’ve also heard they will be getting a new limo to transport people to the club.

This is really good news for the nightlife scene in the middle of the core, the area several blocks north of Beale centered around Monroe.  With Flights soon to open in the old Stella space, we’ll have three spots open until 3 AM on the weekends within a 2-block walk of each other.  I bet a popular itinerary will be to start at Flights for dinner and a wine flight, then to Bardog Tavern for a classic cocktail or a mug of PBR, then over to Paula’s to dance the night away.  There should be a lot of synergy among the three businesses.

Bet it will also be a lot easier to get something going in the old LoLo’s space with Paula as a neighbor around the corner.

This probably isn’t such good news for Hollywood Disco, the club in the old Raiford’s location which has attempted to continue on the 32-year tradition of that building.  The two clubs will more or less be in direct competition with each other, and I know a lot of people will be loyal to Raiford.  I hope they both make it, as the new owners of the Disco are super nice people.  Perhaps they’ll be okay.  The Disco is certainly closer for South Main people who want to continue their partying after being out at Calhoun’s, E&H, or the Blue Monkey.  The Disco also has the advantage of having the Green Beetle across the street, giving patrons a chance to get some ultra-late-night food after they get done dancing.

At any rate, congrats to Paula on her new place, and I have a feeling she’ll see me there quite frequently.