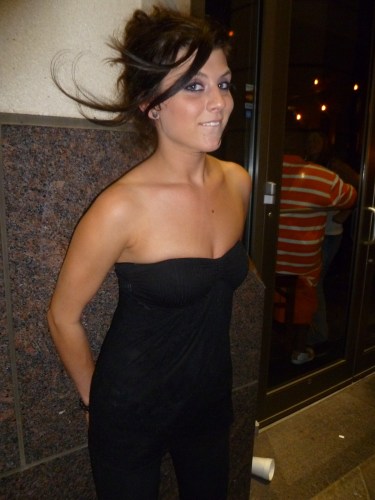 I haven’t had a chance to check out Ferraro’s Pizzeria & Pub in the Pinch yet, but the Hungry Memphis blogger at the Memphis Flyer got by there and took pics.  Check it out. Man that food looks fantastic!  After I watch the USA vs. Ghana game, I may take a trolley north and give Ferraro’s a try.

Good night but an early one last night… hit Trolley Night on South Main, then headed north to the Saucer, then (after formulating an escape plan with a couple of friends) moved on to Kooky Canuck.  Was home before midnight.

Playing a Razz tournament on PokerStars as I type this.  Heading out to watch the USA-Ghana game in a little while.  I better see the tube top I was promised or my game watching venue of choice will change.

Like pizza?  A pizza place in the Pinch is having its grand opening party tonight.  Ferraro’s Pizza & Pub at 111 Jackson features New York-style pies and homemade stromboli.  They have PBR on tap, so this is clearly a Downtown business that understands what its customers want.  You can “like” them on Facebook to keep up with the latest news from Ferraro’s.

Mashable had an article yesterday about a plugin for Foursquare that is sheer genius – Avoidr.  Avoidr lets you make lists of people you’re trying to avoid – exes, annoying people, douchebags, etc. – and then you can use their web interface to see where in the neighborhood those people are.  I know a lot of Downtowners who will find this tool useful.

Mashable also had a post that is a collection of WordPress 3.0 resources.  I’ve read a little about WP 3.0 and I am becoming convinced it is the CMS of the future.  Everyone is going to be using it, or a tool like it, in 3-5 years.  Congrats to local tech ninja Otto on getting mentioned not once, but twice, in Mashable’s post.

Rehab Disco posted on Facebook that their downstairs bar, Rockbottom, has added an Internet jukebox and an ATM “for your Downtown get-down.”

Bardog Tavern has announced they will open an hour early, at 11 AM, on Saturday, to accommodate those who want to watch the World Cup.  They have $3 Guinness during WC games.  I’ve been told that Wednesday morning when they opened early for the USA-Algeria game, it was about as busy as a typical Saturday night around midnight.  Wow.

Congrats to the Peabody Thursday night parties on being named one of the top 10 rooftop bars in the US by Gadling.

I’ll be at Trolley Night on South Main tonight, with appearances by local sports mascots and belly dancers.  Temps are still expected to be hot and sticky, so a tube top is advisable attire if you’re thinking about coming down.  I’ll have the camera with me and am looking for some tube top pics to post to the blog, so stop me if you have one on.

The Coke Cake was truly Mount St. Cake.  I’m now stuffed, have a food hangover and am about to get the best sleep I’ve had in weeks.  As I ate the cake, I thought, “The Nuh-Uh Girl is my neighbor, maybe I should take half of my cake home and leave it as a surprise on her doorstep.”  Then I reconsidered and ate the rest of the cake myself.

The Majestic Grille shot me an e-mail today and announced that they will have the game on the big screen Saturday.  Their full brunch menu will be available until 3, and they will also have the following specials until final whistle:

I’ve already committed to watching the game at Calhoun’s (with an out clause if the Saucer fire sales Dos Equis Lager), but if you’re still deciding where to watch the game, this would be a good place.

Home from work.  Good day today… next month’s business trip got moved back a couple of days and I like the new arrangements a lot better.  Details to come.  Time to go out for some drinks and some tube top hunting.  Not 100% positive that I’ll make it to the Peabody rooftop, but knowing that Muck Sticky will be performing certainly increases the likelihood that I’ll go.

I woke up this morning and got on Facebook.  One of my Facebook friends had posted a pic of Downtown’s biggest female douchebag (I won’t name names, but she’s appeared on this site in a tube top within the past month) making the duckface as she posed for a pic.  I guess it’s time to link to AntiDuckface.com again.

To quote from their site:

you know that face you make when you’re about to take that perfect picture of yourself for the internet?

you know, the pose where you push your mouth out in that sort of pout / kiss face to make it look like you’ve got big pouty lips, a super-defined jawline, and model-quality cheekbones?

I’m probably not going to have time to do a lunchtime post today – gotta drive Downtown and run a couple of errands.  So here’s an early post… there will be fireworks after the Redbirds game tonight.  In addition, they will have $1 hot dogs all night to celebrate King Cotton’s 75th anniversary.  Game starts at 7:05, first 2,000 fans in the gate get special fireworks glasses.  Dollar hot dogs?  Wonder if the Nuh-Uh Girl will show up.

Also, in case you haven’t heard, the Downtown fireworks display on July 4 will take place on Beale Street, rather than on the river as usual.

It will be quite hot for both of these fireworks displays, so ladies, tube tops would be the recommended attire.

Lauren has convinced me that I need to watch soccer at Calhoun’s on Saturday. She told me that if I committed to come to Calhoun’s, she’d buy a new tube top to wear. 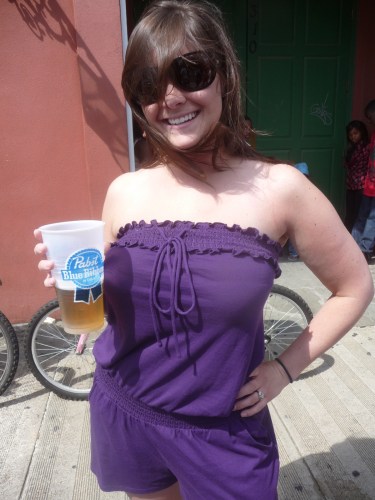 I did give myself an out though.  If the Flying Saucer fire sales Dos Equis Lager on Saturday, that overrides Lauren’s tube top.  Otherwise, I’m at Calhoun’s for soccer.

The Peabody tweeted set times for their Thursday rooftop party tomorrow, and here they are: 7-8:15 for Taco & Da Mofos (set 1), 8:15-8:45 for White Tie Affair, 9 -Taco & Da Mofos (set 2). Muck Sticky will be the special guest of Taco & Da Mofos, and I hear Al Kapone will also make a special guest appearance. I met Muck in the elevator last year, and he was such a nice guy – since then I’ve followed him on Facebook and Twitter, and he always has positive words. Musically, tomorrow is going to be one of the best nights of the year on the rooftop.

Theme will be “a trip to the British Isles” with Guinness, Kilkenny, and Killian’s as the featured beers. On the food buffet, they’ll have fish & chips, pigs in a blanket, wheel of cheddar with crackers, and rye bread. In VIP they’ll have mini beef filets on potato pancakes with horseradish aioli, Cornish pasties, and smoked salmon and cream cheese spread with rye bread and crackers. Free food? You know the Nuh-Uh Girl is going to show up, so you better get there early before she finishes it all.

Even though the temperatures have dropped a bit – to the mid 90s – it’s still plenty warm enough to wear a tube top to the rooftop! $10 cover includes first drink, ladies free before 7.

First of all… GO USA!!!!! Our nearly last-minute goal not only advances us to the knockout round, but as winner of group C we have the 1:30 PM game Saturday, rather than the 9 AM game on Sunday. No getting up at the crack of dawn! I’ll have more to say in a minute, but let’s get the news out of the way first.

This Friday is the last Friday of the month, which means it will be Trolley Night on South Main, with many of the galleries open from 6 to 9. Mascots from Memphis’ sports teams – Tigers, Grizzlies, RiverKings – will be out. Play one-on-one basketball, strap on a pair of skates, or take a belly dancing lesson from Memphis Raqs. At 9 there will be a free outdoor showing of “Eli Parker is Getting Married?”

Continuing the convo thread from Twitter – #thingscolderthandowntownsaucer The interior of the mascots’ costumes on Friday night.

If you’re an SMA member, look for them grilling out in the lot next to Bluff City Coffee at Trolley Night. Free burgers, dogs, and Boscos beer for SMA members. Free food? Wonder if the Nuh-Uh Girl will show up.

Question from a reader, who saw a one-piece tube top/shorts outfit the other day: “If jean shorts are called ‘jorts,’ should the outfit I saw be called ‘torts?'”

The Grizzlies are having an NBA draft watch party and a Select-a-Seat party tomorrow night at the FedExForum. Come cheer with the Grizzlies as they make their picks for 2010. If you purchase your 2010-11 season tickets tomorrow night, you’ll receive a replica Grizzlies jersey of the first draft pick, and an invitation to an exclusive meet-and-greet on Friday. You must call 901-888-HOOP to take advantage of this offer.

MPACT Memphis is having another “happy hour with a twist” Tuesday night. This one will feature an open bar at Earnestine & Hazel’s from 6 to 7. There will be an open bar, free appetizers, an open bar, and networking. In addition to the open bar, there will be discussion of “The Feedback Project,” an attempt to implement the suggestions given by the young professional community in the Voice of MPACT Survey. I wonder if “more events with open bars” was one of the things young professionals wanted. Oh, and also, free appetizers? Wonder if the Nuh-Uh Girl will show up.

All right, back to the World Cup… I’m receiving e-mails about Local. They decided to show the USA-Algeria game on both upstairs TVs. “The girl behind the bar did suggested we could go downstairs to watch the England game but as both games relied on each other that’s not the point,” wrote someone who was there. He said a lot of people went around the corner to the Silly Goose, which came through with both games.

In the process of deciding where to watch Saturday’s game. Things I’m looking for in a Saturday watch venue: Air conditioning, a decent beer to drink that’s under $3, and a place where I’ll have friends there. Just a reminder to local bar managers.