Yesterday I took a break from Sunday Fun Day beers in the mid-afternoon to get something to eat. Having not been to the Flying Fish in several months, I went there.

As I walked in, I scanned the Fish’s rather extensive menu. I realized that, although the Fish has been open for more than four years, I have not tried the majority of the menu items. I made up my mind to try at least one new thing. Scanning the “Starters” list, the fried jalapeno chips sounded good, since I love spicy food. I ordered them, and having satisfied my requirement to try something new, I ordered a 3-piece catfish filet basket as well.

Ten minutes later, my buzzer went off – they give you buzzers to let you know when you can pick up your food, similar to the chain Italian restaurant Fazoli’s. I walked up to the counter and found a huge basket of fried jalapenos, with a cup of ranch for dipping. 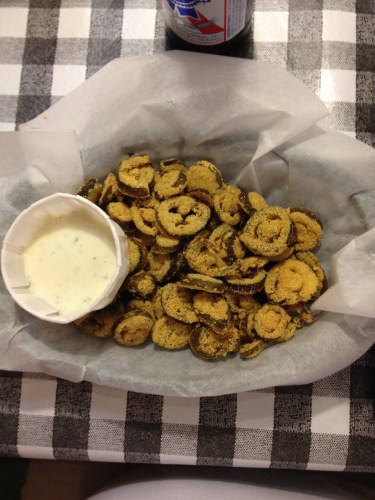 There were enough that I could have satisfied my appetite just with the jalapeno chips alone. I suppose that would not have been a nutritionally balanced meal, though, so I’m glad I got the catfish too. It seems like frying the jalapenos took out some of the heat. They had a spicy zing but didn’t set my mouth on fire. The ranch dressing took some of the edge off as well. I also dipped some of the jalapeno chips in the tartar sauce that came with my catfish, and that was a good combination too.

At $2.99, the jalapeno chips were an excellent value. I will keep them in mind next time I need an inexpensive snack.

I noticed a couple of changes since my last visit to the Fish. For one, the fried chicken livers are gone from the menu. I guess they weren’t popular. I’m sorry to see them go, though, because my grandmother got me hooked on chicken livers when I was a little kid (back then KFC sold them). They still have the coolers from which you can grab a beer as you wait in line to order, but they now carry PBR in bottles rather than cans. I have a slight preference for the cans, but either will work. I’m just happy to see they carry PBR in any form.

The Fish is on Second across from the Peabody. Great place to bring kids, great people watching at the garage-window seats facing the sidewalk.